The latest PMI data showed the global economy losing growth momentum again in August, slipping close to the three-year lows seen in the second quarter. Weakness reflected a deepening downturn in global trade that showed signs of spreading to the hitherto-resilient service sector. Slower jobs growth meanwhile threatens to pull growth lower in many countries in coming months, linked in turn to a further steep drop in global business optimism about the year ahead. Global price pressures also continued to ease, down to the lowest since 2016.

By country, the UK recorded the weakest expansion, but growth also slowed sharply in the US and remained subdued in the eurozone, with Germany's manufacturing sector acting as a key drag. Growth meanwhile perked up in Japan and China, the latter helping emerging market growth hit a four-month high.

At 51.3 in August, the JPMorgan Global PMI™, compiled by IHS Markit, fell from 51.6 in July to backtrack closer to the three-year lows seen in May and June. The index, which measures changes in total output across both manufacturing and service sectors, correlates well with GDP growth, and hints that the annual pace of global economic growth (at market prices) has slowed to around 2% in recent months, down markedly from 3% at the end of 2017. 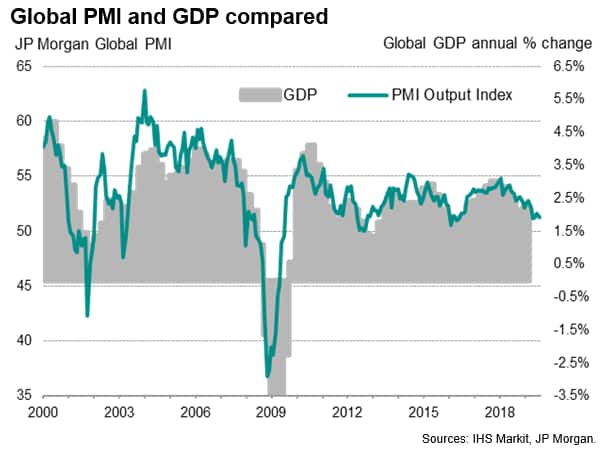 The key driver of the recent slowdown has been a decline in global trade. Goods exports fell at the sharpest rate since October 2012, dropping for a twelfth successive month in August. Although factory output stabilised after two months of declines, the performance was still one of the weakest seen over the past seven years to highlight the extent to which reduced trade flows have completely eroded manufacturing growth in recent months. 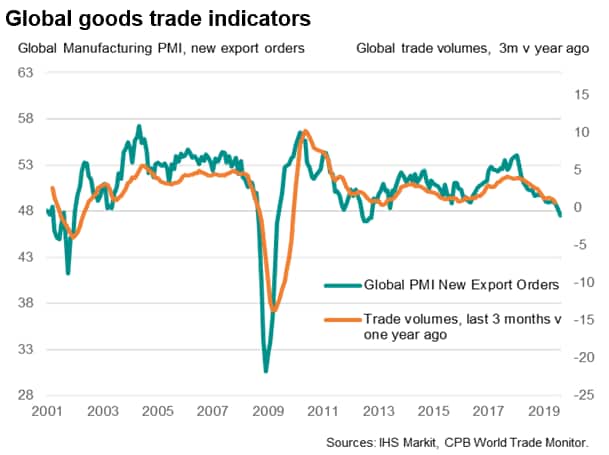 Global service sector growth remained more resilient than manufacturing, but nevertheless waned to the second-weakest in three years amid a slowdown across business, financial and consumer services. The latter showed the worst performance of the three main service sectors, likely attributable in part to a worsening labour market picture during the month. 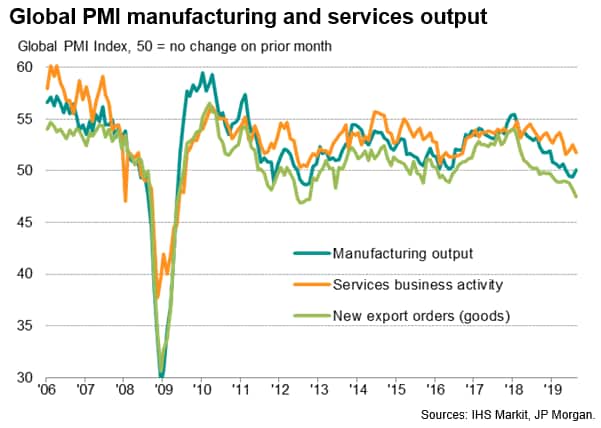 Global jobs growth came closer to stalling in August, easing to the lowest since September 2016. Manufacturing headcounts fell, albeit only modestly, for a fourth consecutive month, accompanied by the smallest rise in service sector jobs since October 2016. 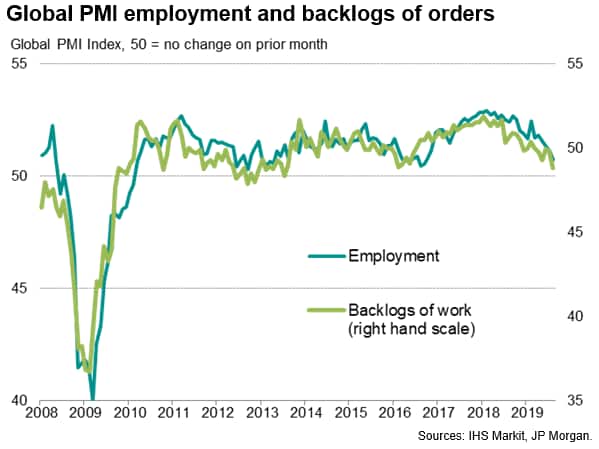 A key development to watch in coming months will be the extent to which the labour market might continue to weaken, as this could prove the main transmission mechanism by which the trade-led manufacturing slowdown spreads to the service sector, which is typically more dependent on domestic demand and household spending.

While the deteriorating labour market picture was partly driven by the weakness of current order books, hiring was also hit by a further slump in business confidence in the outlook. Business expectations for the year ahead fell to their lowest since comparable data covering both manufacturing and services were first available in 2012. Data for services, which were first collated in 2009, fell to the lowest in the series' history. 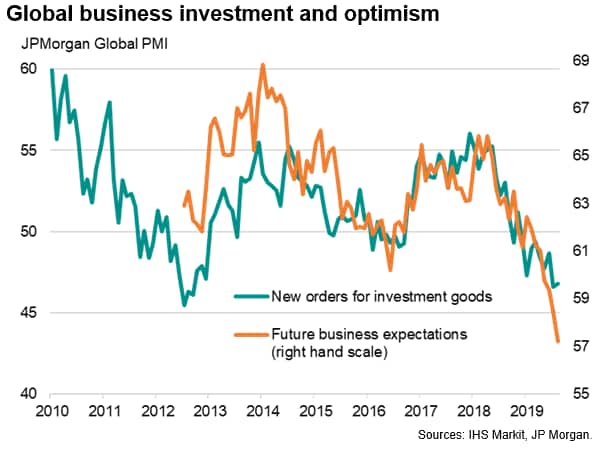 Analysis of the anecdotal reasons provided by PMI contributors for the gloomier outlook showed a record incidence of worries about "uncertainty", often linked to geopolitics such as Brexit, as well as a near record number of concerns about trade wars. 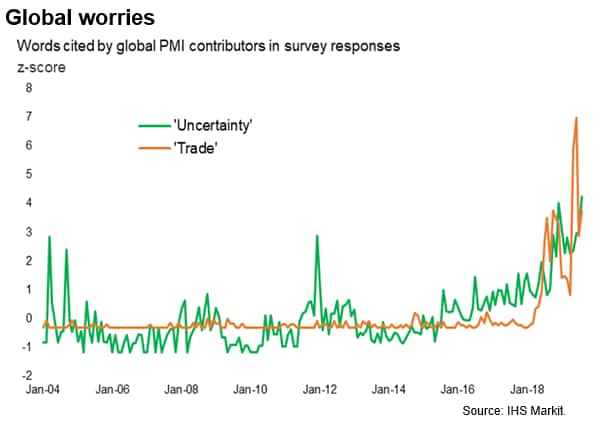 A key PMI gauge of global investment goods output also remained deep in contraction territory in August, continuing to run at the lowest levels seen since late-2012. The investment goods downturn highlights how the global slowdown and darker outlook has hit capital spending by companies, which could in turn dampen future growth and productivity.

The drop in demand for investment goods contrasted with a rise in sales of consumer goods, though even here the rate of increase has slowed to the weakest for just over three years, adding to signs that domestic demand in many countries is also weakening as households start to rein in their spending.

The global slowdown has brought with it a reduction of firms' pricing power, which in August led to average selling prices for goods and services barely rising. The monthly gain was the smallest recorded globally since March 2016. 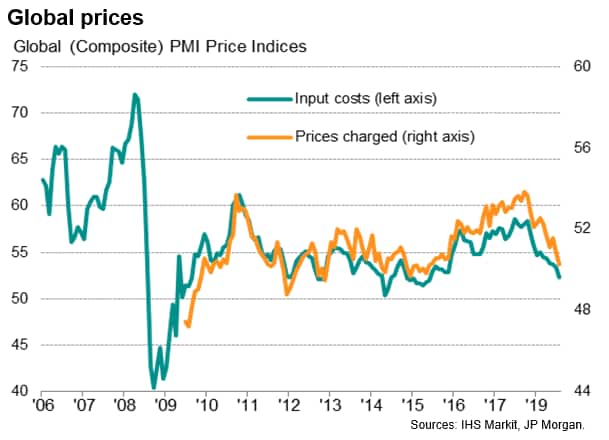 Cost and selling price pressures eased in both manufacturing and services, though the former saw the weakest trends, with average prices charged in fact falling globally for the first time since early-2016.

Looking at the world's largest economies, the UK recorded the worst performance in August, with the composite PMI among the lowest seen over the past decade and raising the risk of recession after GDP fell 0.2% in the second quarter. Brexit worries and political uncertainty continued to subdue business activity in August. UK manufacturing output fell sharply while service sector growth almost stalled.

Growth also slowed sharply in the US to one of the weakest since 2009, with manufacturing malaise showing signs of spreading to services. The PMIs put the US economy on course to grow at a reduced annualised rate of 1.5% in the third quarter so far.

The rate of expansion also remained worryingly lacklustre in the eurozone, with the composite PMI rising but indicative of modest growth of 0.2% at best so far in the third quarter. However, a key difference between the eurozone and US and UK was its sustained resilience of the service sector, helping to offset a steep manufacturing downturn.

In Asia, growth picked up to an eight-month high in Japan, mainly fuelled by a significant upturn in services growth to the fastest recorded in recent years. China also reported a quicker rate of expansion, buoyed by improved performances in both manufacturing and services. China's employment growth also notably rose to the second-highest since early-2013.

In other key emerging markets, growth accelerated in both Brazil and Russia (albeit merely to five- and three-month highs respectively) and remained relatively robust in India, hinting that all four 'BRICs' could see the pace of economic growth accelerate in the third quarter.