Global economic growth slowed to a crawl in July, according to the latest PMI survey data, led by the developed world falling into contraction for the first time in two years. Both the US and eurozone reported renewed falls in output and the pace of expansion slowed in the UK and Japan, though growth in the major emerging markets generally remained resilient. Worldwide manufacturing output growth stalled and the recent surge in service sector activity lost significant momentum.

Companies blamed tightening financial conditions, heightened uncertainty linked to the Ukraine war, shortages and, most importantly, high inflation for the deteriorating business environment. Optimism about the year ahead likewise fell further in July, prompting a pull-back in global hiring.

Encouragement came from a weakening of global inflationary pressures, with average prices for goods and services rising at the slowest rate for ten months thanks in part to lower input cost inflation, though also attributable to the recent slowing of demand growth. 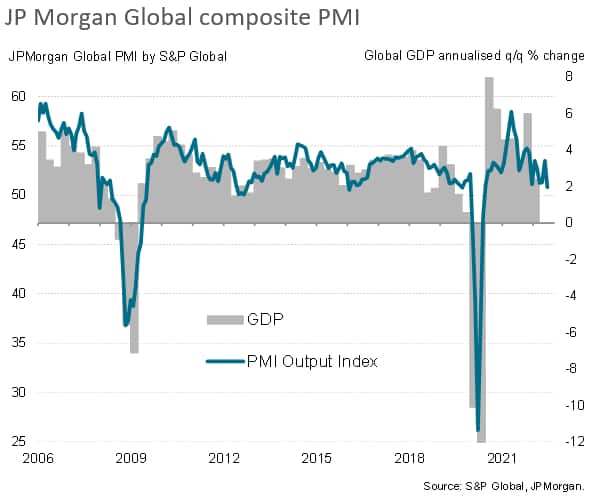 Weakness spreads from factories to services

Global economic growth slowed sharply in July, according to PMI survey data compiled by S&P Global and sponsored by JPMorgan. The headline PMI, covering output of both manufacturing and services, fell sharply from 53.5 in June to 50.8 in July. The latest reading signals only marginal growth and is the weakest since the recovery from the initial pandemic lockdowns began two years ago. Barring these lockdown months, the July reading was the joint-second lowest for a decade, the current degree of malaise exceeded only by the near-stagnation seen in February 2016. At its current level, the PMI is indicative of annualised global GDP growth of just 2%.

The worst performance was seen in manufacturing, where a China-led resumption of global growth in June (after two months of decline) faded to register no change in worldwide production volumes. However, service sector growth also deteriorated, dropping to the second-slowest since July 2020, to register only a very modest expansion of activity. 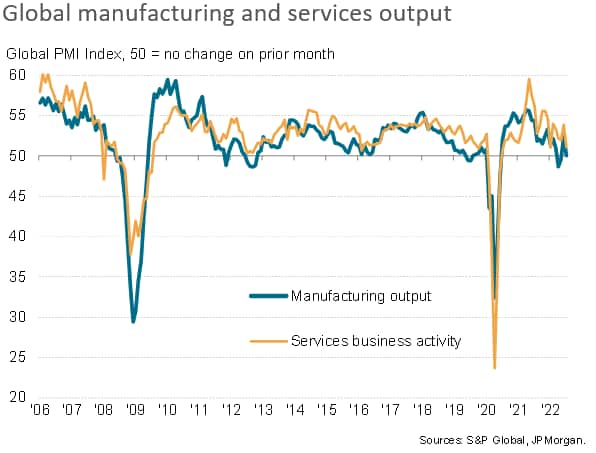 The most resilient performances in July were again reported in the emerging markets. Growth slowed slightly in mainland China, but remained among the highest seen over the past decade thanks to sustained manufacturing growth and resurgent demand for services as the economy continued to reopen from Omicron-related containment measures.

Similarly, strong service sector expansions helped drive solid growth in India and Brazil, though July saw a loss of growth momentum in both cases as the stimulus from the reopening of these economies showed signs of moderating. India notably enjoyed an additional boost from an accelerating manufacturing sector. 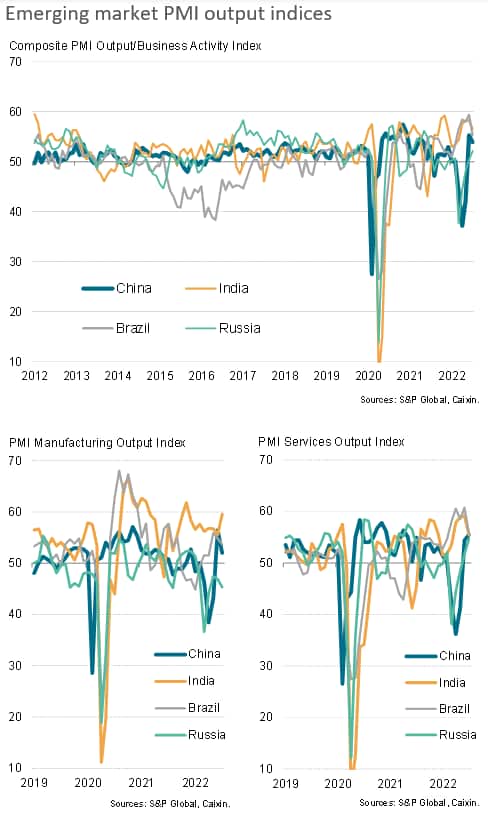 Emerging market growth as a whole consequently remained broadly resilient at one of the fastest rates seen over the past decade thanks to its recovering service sector, though lost some pace compared to June.

In the major developed world economies, output fell in the US for the first time in two years, and likewise slipped into decline in the eurozone. Excluding pandemic lockdown months, these performances were the worst recorded since 2009 and 2013 respectively, and represent marked turnarounds from the rapid expansions seen earlier in the year following the reopening of economies from COVID-19 containment measures.

The robust growth seen in Japan during June meanwhile gave way to near-stagnation in July, and growth in the UK sank to a 17-month low.

Manufacturing output contracted in all four largest developed economies in July, with the US also seeing a contracting service sector and services growth weakening in all other cases. 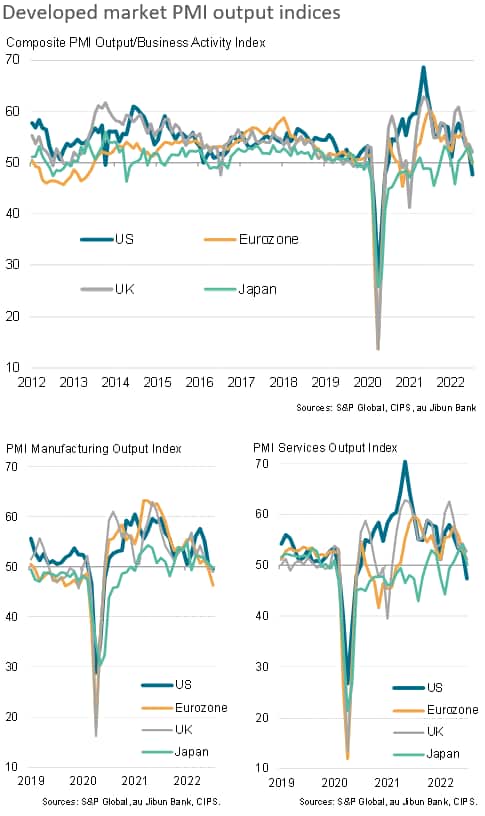 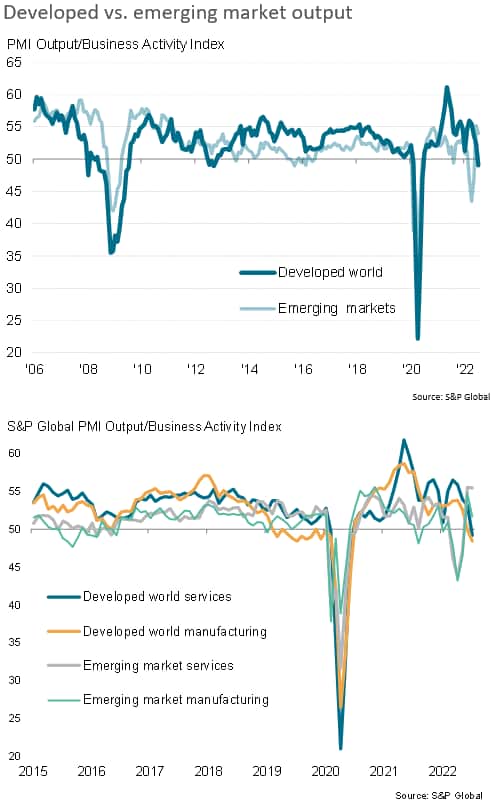 Demand growth meanwhile continued to deteriorate in July. New orders placed for goods fell globally for the first time in two years, registering one of the worst demand downturns seen over the past decade (albeit still only modest), while new business placed at service providers grew at the joint-second weakest rate since January 2021. The resulting overall rise in demand signalled was the softest for two years. 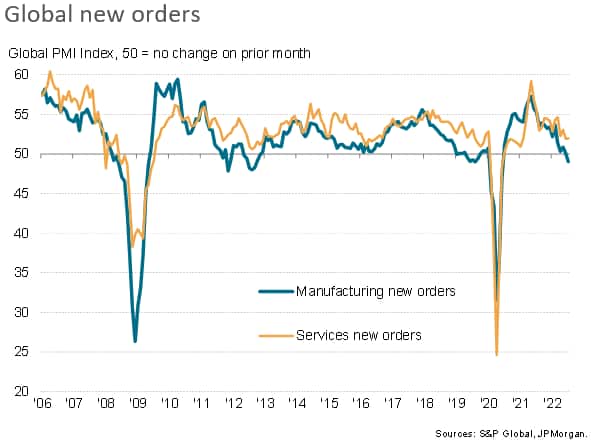 The pull-back in demand growth meant firms ate into previously-placed orders to keep workforces busy, resulting in the first drop in backlogs of work for nearly a year-and-a-half. The decline in backlogs was recorded in manufacturing and services, as well as in both developed and emerging markets on average, and is a development which is typically followed by companies reducing their staffing levels. In July, jobs growth merely slowed globally, down to a six-month low, but the fall in backlogs provides a strong signal of a weakening employment trend in the coming months, absent a revival in demand. 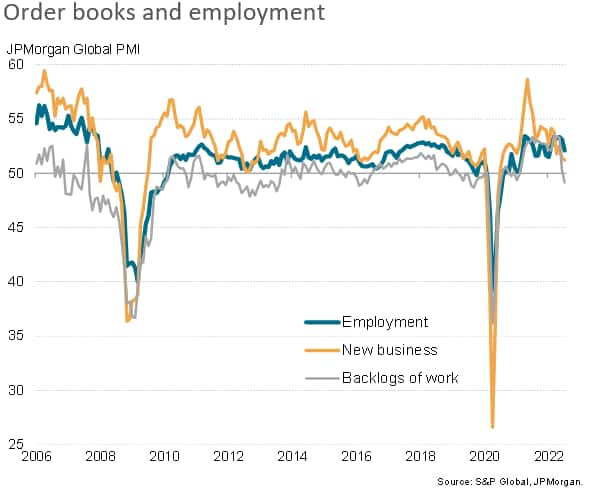 Brazil reported the steepest job gains in July, followed by the UK, US and eurozone, though in all cases rates of job creation slowed. Net job losses were meanwhile recorded in mainland China, and only modest employment growth was seen in India and Japan. 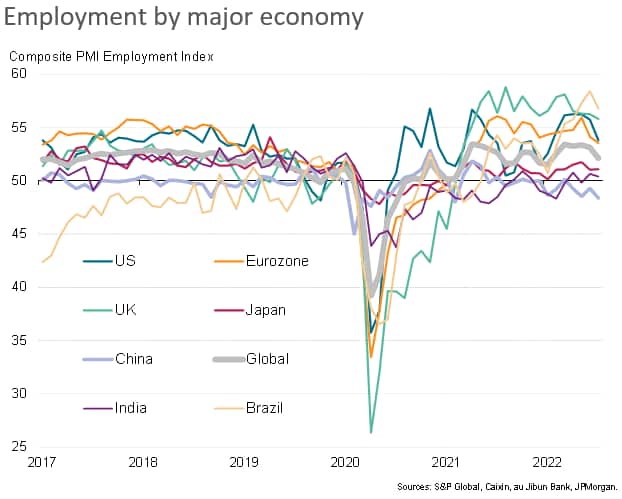 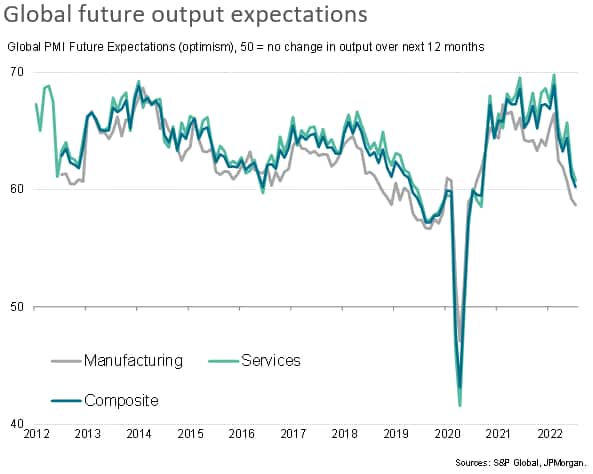 Future expectations are running especially weak by historical standards in India and the eurozone, the US and the UK. On the other hand, sentiment remained encouragingly buoyant in Brazil and Japan, and has lifted slightly further above its long-run trend in China. 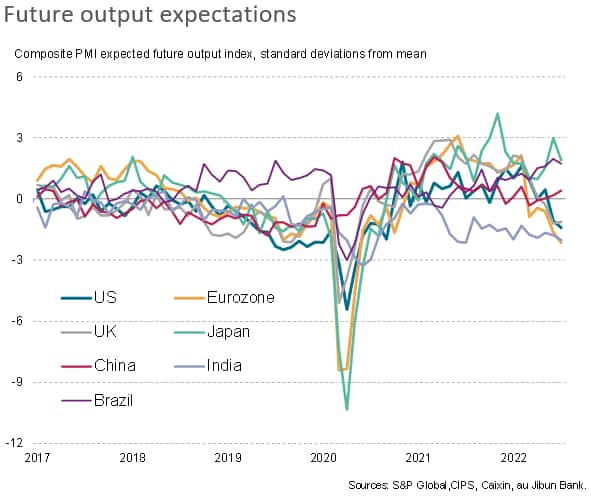 Gloomier prospects were commonly associated with worries about the resilience of demand in the months ahead, especially with monetary policy being tightened aggressively in many markets and the Ukraine war continuing to dampen risk appetite. Companies also continued to worry of supply availability for various inputs, including energy.

Perhaps most importantly, companies have also grown increasingly concerned about the impact of rising prices on spending power, with consumer price inflation having reached its highest for four decades in the US and Europe. However, the July PMI surveys brought some welcome news in this respect, with input cost inflation slowing globally for a second month in a row to reach a five-month low. 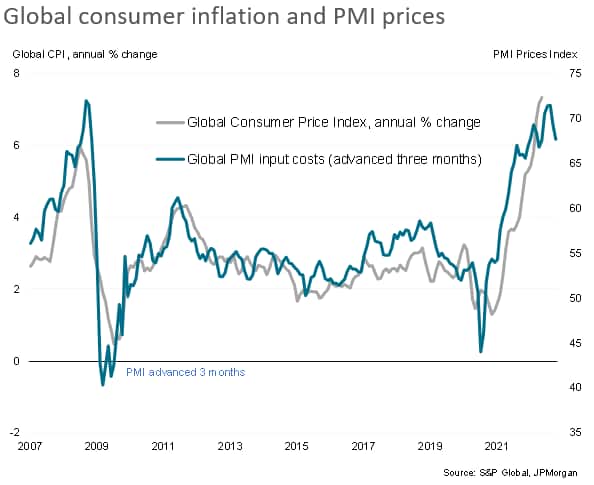 Price pressures have moderated most noticeably in manufacturing, with service sector input cost inflation now running ahead of that seen in manufacturing, reflecting the service sector's greater exposure to labour costs, with wage growth rising in July. Measured globally, the number of companies reporting higher prices due to the pass-though of higher staff costs has risen to an all-time high, running at over three times the long run average. 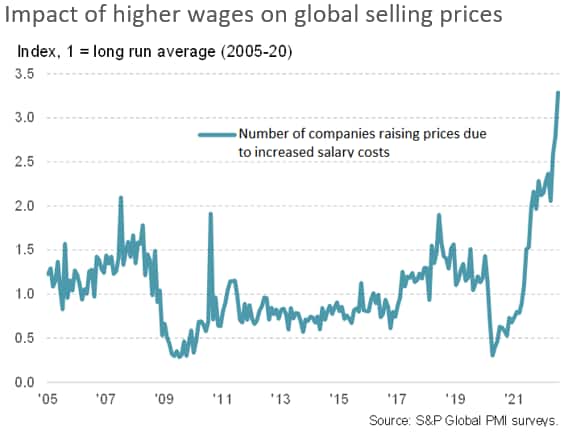 Despite the increase in wage pressures, the overall reduction in input cost growth thanks to lower industrial goods prices and falling energy costs (notably oil) fed through to lower selling price inflation globally for both goods and services. Across both sectors, the increase in selling prices was the slowest for ten months, auguring well for consumer price inflation to peak soon. 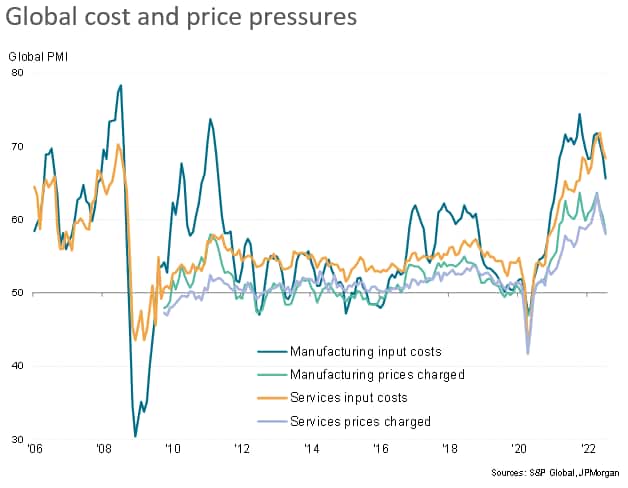 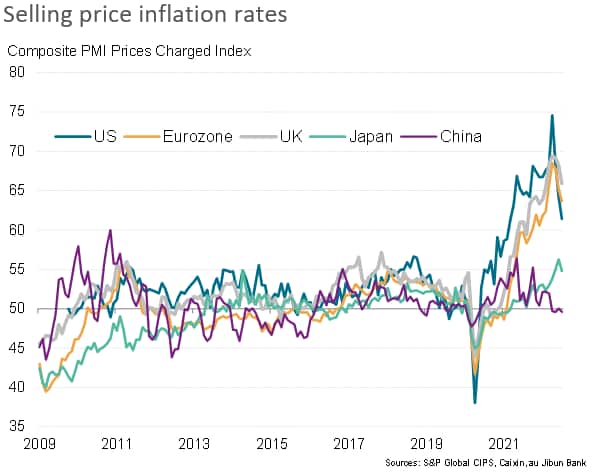 The #weekahead sees a plethora of Q2 #GDP updates from around the world, plus #IP numbers from 🇺🇸 & 🇨🇳. See our ful… https://t.co/CUX5UKDSFj