Global growth at highest since August 2014 as service sector revives

Global economic growth accelerated to the fastest in just over six and a half years in March, buoyed by a rejuvenated service sector accompanying further manufacturing growth. The biggest change was a near-steadying of activity in the consumer services sector, which has been hardest-hit by the pandemic, as coronavirus disease 2019 (COVID-19) restrictions continued to be lifted on average globally.

The US led the upturn, though output rebounded in Europe and showed signs of stabilising in Japan. Fortunes were more mixed in the emerging markets, with Brazil most notably seeing a steepening downturn in March.

At 54.8, up from 53.2 in February, the JPMorgan Global PMI™ (compiled by IHS Markit), hit its highest since August 2014. The sustained expansion took the recent run of growth into its ninth straight month, with the rate of growth among the highest recorded over the past decade. 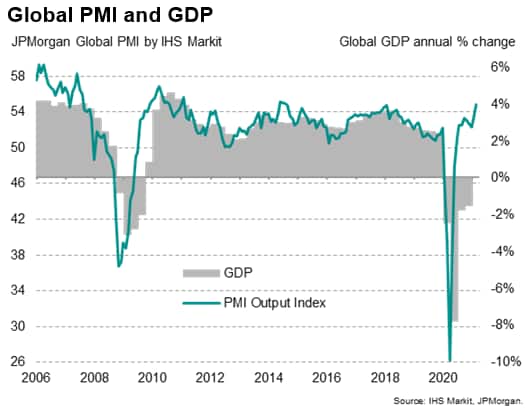 Manufacturing continued to expand at an impressive pace, with growth accelerating to one of the fastest seen since 2011 despite widespread reports that near record supply delays and shortages of inputs often constrained production and hampered shipments. However, it was the service sector which saw the biggest monthly improvement in March, with growth of business activity jumping to the highest since June 2018. 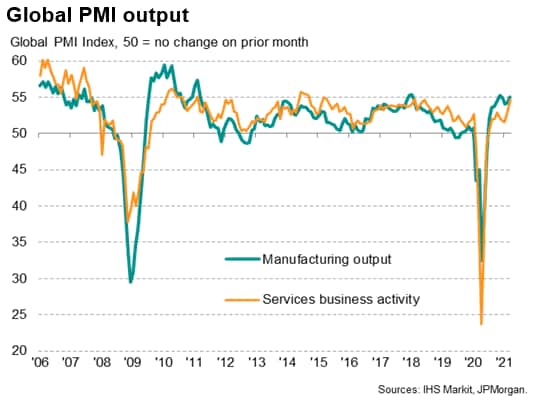 The faster service sector growth coincided with a further easing of measures to control further outbreaks of the COVID-19 outbreak. 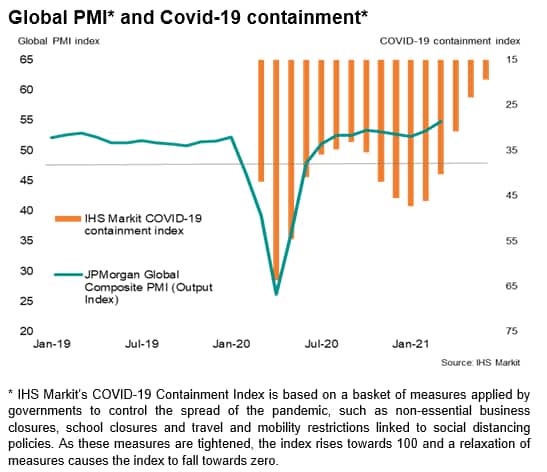 IHS Markit's Global COVID-19 Containment Index fell from 46 in February to 40 in March, its lowest since last October, as restrictions were eased on average around the world for a second successive month.

Looking deeper into sector trends, by far the biggest change was seen for consumer services, which have bucked the recovery trend in recent months, and have contracted continually since the pandemic began in February of last year. However, March saw the rate of decline ease markedly to register only a very marginal downturn in business activity, linked in turn to by far the smallest decline new in new business inflows into the sector seen since the start of the pandemic.

However, other service sectors fared well. Financial services led the overall global economic upturn for the fourth straight month, with the rate of growth moderating only slightly from February's all-time high (comparable data are available since late-2009).

Business to business services also performed well, enjoying the fastest expansion since June 2018 as corporate spending picked up and growth increasingly spilled over from the manufacturing upturn to industrial service providers.

All broad sectors of manufacturing meanwhile reported robust expansions, led by the investment goods sector to hint at an encouraging sustained upturn in capital spending. Also noteworthy was an acceleration in consumer goods production to the joint-highest since December 2018, fueled in particular by a surge in demand for consumer goods in the US (in part attributed by many companies to fresh fiscal stimulus). 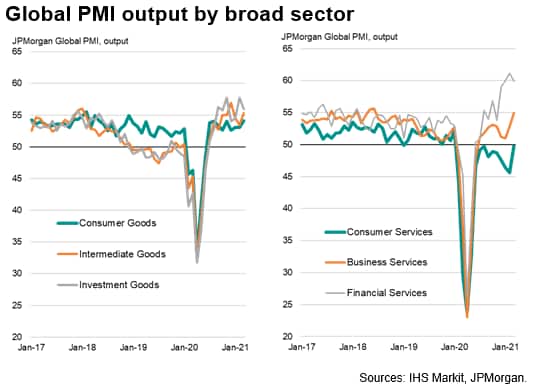 The principal area of weakness in the global economy remained international trade in services, typified by tourism and travel, which continued to report falling output due to ongoing COVID restrictions. However, even here the downturn eased markedly to the weakest since January 2020. Global goods exports meanwhile accelerated to the highest since the start of 2018. 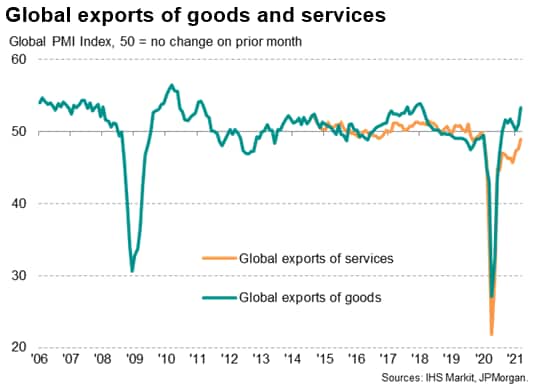 The US continued to lead the global expansion, with growth not only hitting the highest since August 2014 but also running close to an all-time US survey record high. The service sector was the main driver of the US expansion, recording the fastest growth of all major economies surveyed in March, though manufacturing growth slowed mainly as a result of supply bottlenecks (new orders for goods rose at an increased rate). 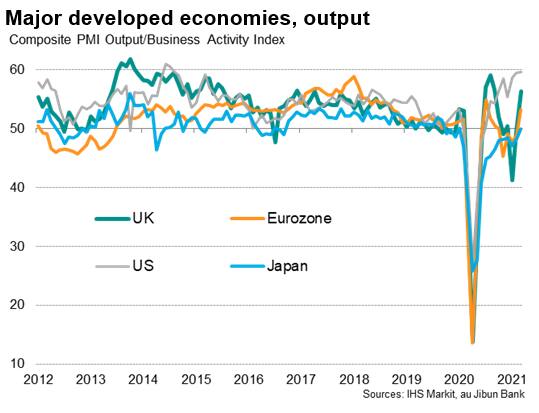 Growth also rebounded in the Eurozone and UK as businesses increasingly emerged from lockdowns, most forcefully in manufacturing, where record eurozone growth was recorded.

Japan's economy meanwhile came close to stabilising, recording the smallest (only marginal) contraction of business activity since the pandemic started. An ongoing - though moderating - service sector downturn countered the strongest manufacturing upturn for over two years.

In the major emerging markets, India recorded the strongest expansion of business activity for the third successive month, taking over from China, where growth accelerated but remained weaker than seen late last year.

Although India's growth remained among the highest seen over the past decade, output was constrained by rising infection rates hitting service sector activity. In China the largest constraint appeared to be shipping shortages for manufacturers, especially in relation to exports.

Brazil meanwhile saw the worst of both worlds, with manufacturing hit by supply chain delays and further COVID-19 restrictions, resulting in Brazil being the only major economy to report a deterioration of factory production in March, which fell for the first time since last May. Similarly, service sector activity contracted at a rate not seen since last July amid the renewed virus wave, leading to an overall drop in activity of a magnitude not seen since last June.

Although Russia also struggled to sustain manufacturing output growth, the service sector expanded at the sharpest rate since October 2019 as COVID restrictions were eased, resulting in the fastest growth of the economy since last August. 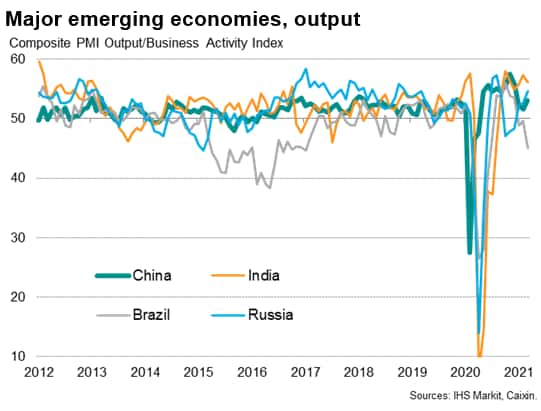 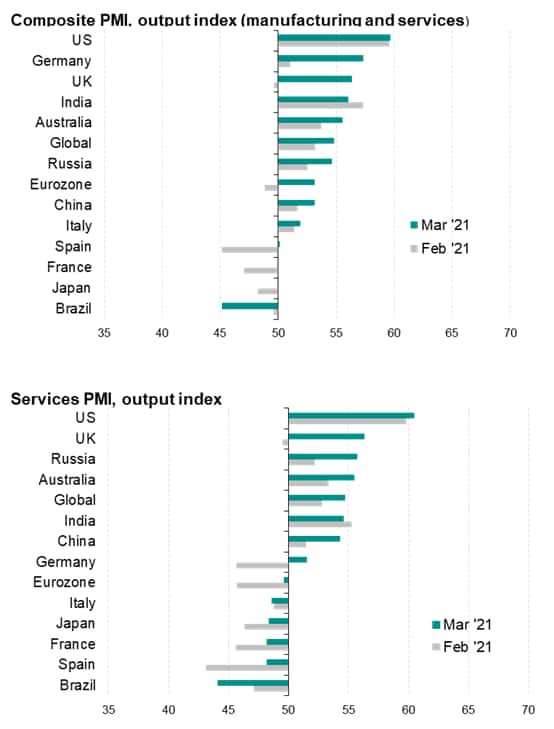 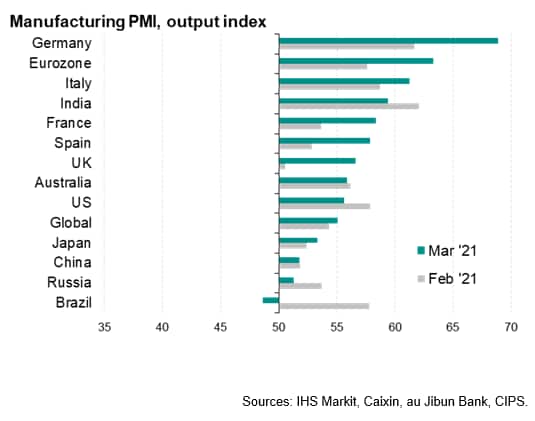