Global economic growth accelerated in February, according to the worldwide PMI surveys conducted by IHS Markit, with growth falling just short of last October's peak to signal the second-strongest expansion since August 2018. The upturn was led by the manufacturing economy, as further efforts to contain the coronavirus disease 2019 (COVID-19) pandemic continued to limit service sector growth, notably for consumer services.

At 53.2, up from 52.3 in January, the JPMorgan Global PMI™ (compiled by IHS Markit) indicated rising output for the eighth straight month as demand continued to revive from the initial impact of COVID-19 lockdowns. Whereas growth had slowed in the three months to January, primarily reflecting the re-introduction of measures to control further outbreaks of the virus in many countries, February saw restrictions ease on average. IHS Markit's Global COVID-19 Containment Index fell from 48 in January (which had been its highest since last May) to 45 in February. 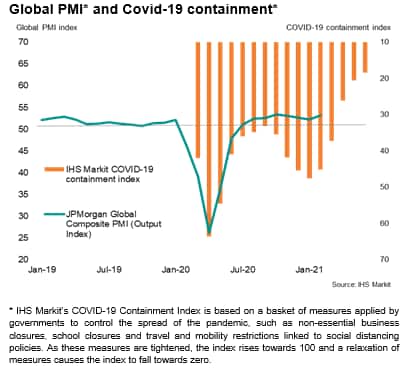 Manufacturing continued to lead the upturn, albeit with the rate of expansion remaining below the peak seen at the end of last year due in part to supply shortages, though still notching up one of the best performances seen over the past decade.

Leading the production upturn was a surge in output of investment goods, such as machinery and equipment, with the rate of increase the second-quickest over the past ten years, pipped only by last November's increase.

The weakest area of manufacturing remained consumer goods, reflecting ongoing retail closures and social distancing measures in many countries, although even here sustained and moderate growth was recorded.

Growth of business activity in the service sector meanwhile lagged behind that of manufacturing again, principally due to an ongoing marked fall in cross-border trade in services (whereas exports of goods continued to rise). Service sector exports continued to be hit by COVID-19 restrictions on travel and tourism in particular.

Consumer services hence suffered by far the worst performance of all the broad sectors in February, with business activity deteriorating at the sharpest rate since last May. In contrast, output of business services and financial services accelerated, the latter notably quickening to the fastest recorded since comparable data were first available in 2009 as growth in recent months has surpassed the prior peak seen in 2012. 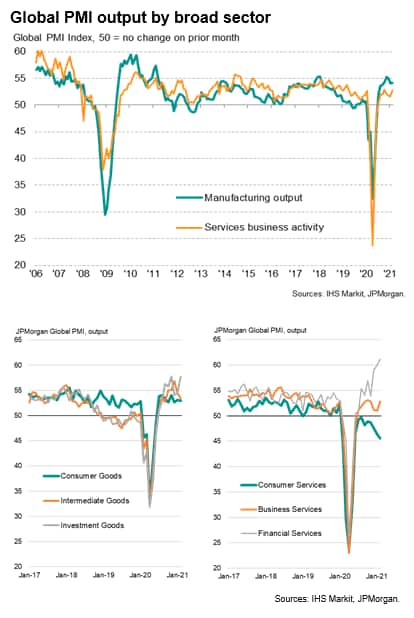 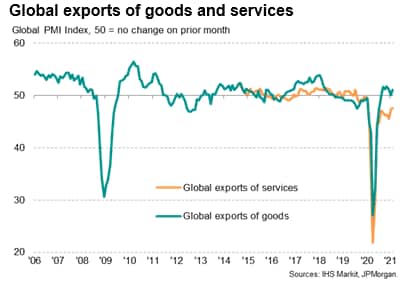