IHS Markit's unique global sector PMI data showed average prices charged by food producers to have risen at a rate unprecedented in over a decade in January, as supply shortages pushed up producers' costs.

Rising food prices are important, as not only does food comprise a major proportion of consumer price inflation baskets, but rising food costs are politically undesirable, not only being highly visible but also hitting the poorest hardest.

IHS Markit's global sector PMI data cover every major developed and emerging economy, based on monthly questionnaires completed by a panel of over 30,000 companies in over 40 countries. The survey data are best known for providing the first indications of national economic trends, but also provide unique insights in detailed sectors of the global and regional economies.

The PMI survey data collected from food producers showed prices charged rising at a rate unsurpassed since comparable data were first available in late-2009. The Global Food Producer PMI Prices Charged Index rose to 63.6 in January, up from 62.5 in December and equaling the prior survey high recorded back in 2011. With any index reading above 50 signalling a rise in prices compared to the prior month, the index points to a surging rate of food price inflation. 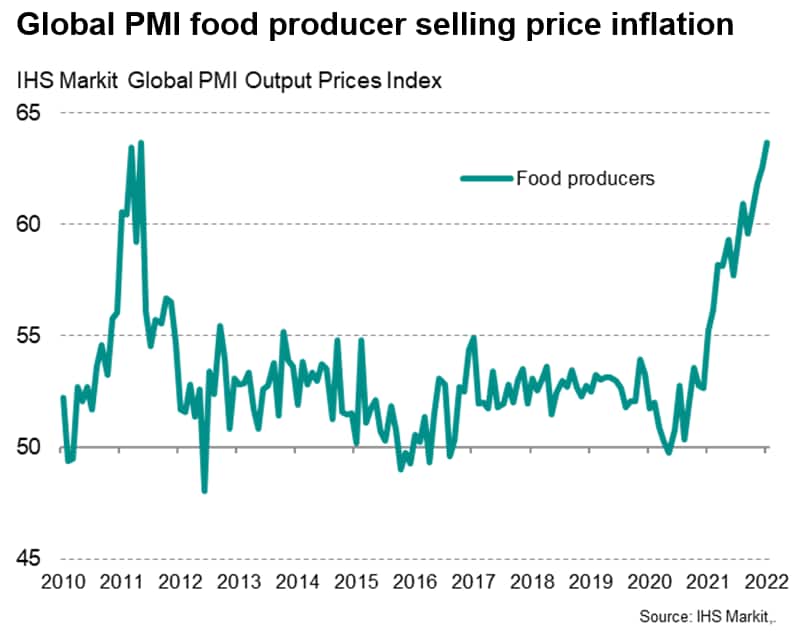 The survey data have signalled a steep increase in food price inflation since a slight fall was recorded in May 2020, which had been linked to falling commodity prices as demand slumped amid the initial pandemic lockdowns. Since then, however, producers' raw material input costs have risen at an accelerating rate almost continually during the pandemic, which has forced food manufacturers to pass these costs on to customers in the form of higher prices.

Although January saw a slight easing in the rate of food producers input cost inflation, it was still the second-sharpest rise in a decade after December's all-time high. 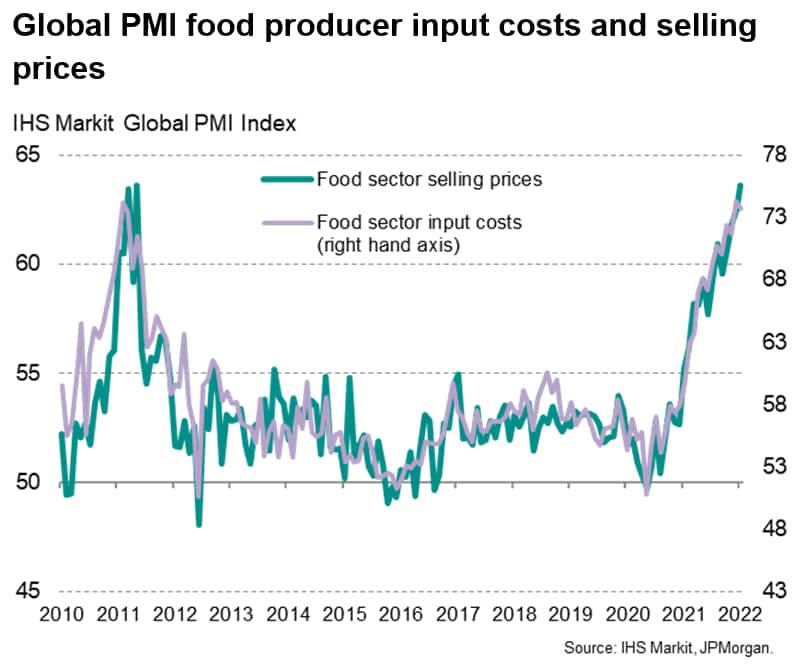 A key driver of these higher costs has been the worsening supply chain situation during the pandemic. In a sign that the recent steep rise in food price inflation may not yet have peaked even at the current decade-high, these food supply shortages worsened further in January. As measured by the PMI's suppliers' delivery times index, the incidence of supply chain delays in the food sector rose to an unprecedented high in January, greatly surpassing anything seen prior to the pandemic. Risks to the outlook

The prospect of global food prices continuing to rise sharply in coming months poses several important threats to the economic and political outlook.

In the first instance, food prices form a significant proportion of consumer price inflation (CPI) baskets in all countries, and as such any continued surge in food price inflation is likely to contribute to elevated CPI readings in coming months. These elevated readings will in turn exert increased pressure on central banks to tighten monetary policy.

A consequence of higher food inflation is that the toll falls more heavily on low income households than wealthier consumers, as food forms a relatively larger proportion of poorer families' total spending bills. Hence governments are especially concerned by the destabilising political impact that rising food prices can have. Alongside surging energy prices, which likewise hit the poorest hardest, the record increase in food prices poses a potential threat to stability in many countries of a nature not seen for many years.