Global manufacturing remained encouragingly resilient in January despite rising coronavirus disease 2019 (COVID-19) infection rates and fresh lockdown measures in many countries, according to the latest PMI survey data. Especially strong expansions continued to be reported in the US, Germany and Asia excluding Japan and China, notably in India and Taiwan.

However, export growth slowed close to stalling, dampening production growth compared to prior months, with an especially notable renewed fall in exports out of mainland China. Factories worldwide meanwhile also reported that exports and purchasing continued to be dogged by supply delays, which worsened further as demand often outstripped supply and logistics delays caused increased transportation issues. The resulting increase in supplier pricing power and shipping surcharges caused input prices to rise at the fastest rate for almost a decade, with prices charged by factories also hitting a near ten-year high. 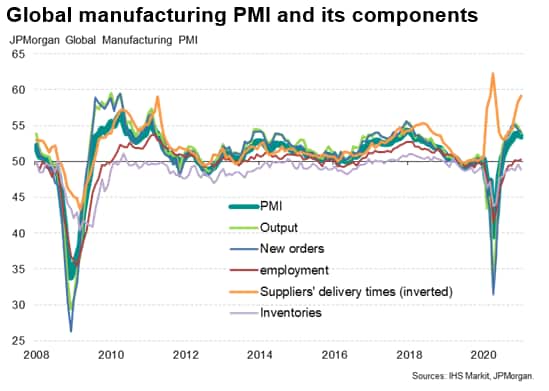 The JPMorgan Global Manufacturing PMI, compiled by IHS Markit from its proprietary business surveys, edged lower from 53.8 in December to 53.5 in January, indicating an improvement in business conditions for a seventh successive month but at a slightly slower rate than seen in November and December. The expansion was nonetheless the third-strongest recorded for almost three years.

While output and new orders rose at slightly slower rates, both remained indicative of solid growth of production and demand for goods. Official data, available up to November, have meanwhile shown manufacturing output regain levels of a year ago, underscoring the sector's swift recovery from the COVID-19 related downturn in the first half of 2020. 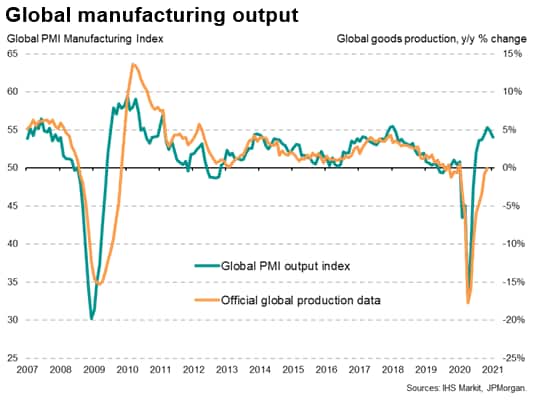 Output rose in 19 economies covered by the IHS Markit PMI surveys, but fell in 12. By comparison, only nine reported falling output back in December. The steepest loss of output was seen in Mexico, followed by Kazakhstan, Ireland and Malaysia. Some six economies swung into decline, with Ireland seeing the biggest turnaround, while three - Russia, the Philippines and Turkey - saw renewed growth. The strongest gains were seen in India and the US, both of which saw growth accelerate to near decade- and six-year highs respectively, followed by Germany and Taiwan. 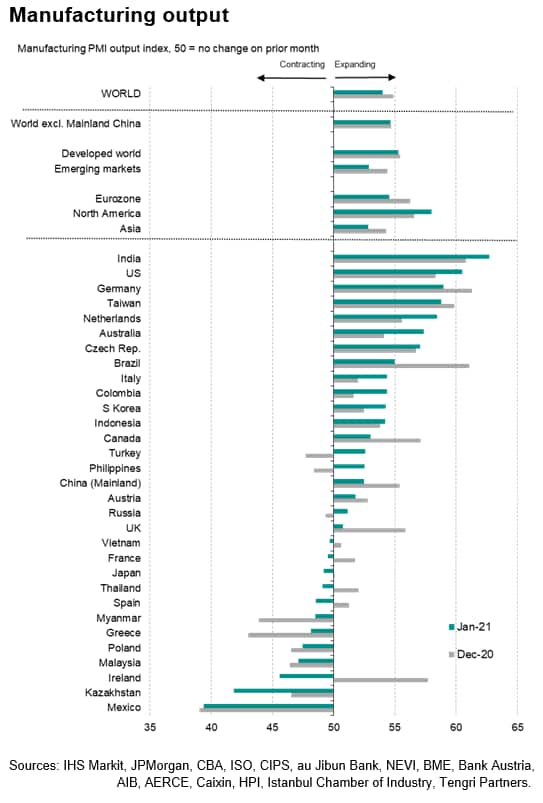 Other notable developments among the major economies was a near-stalling of growth in the UK, where Brexit-related issues exacerbated the impact of a third national lockdown, and a marked slowing in China, where output showed the smallest rise since April. Japan slipped into decline, linked in part to tighter COVID-19 restrictions, but in contrast the rest of Asia saw the fastest factory growth since April 2011. 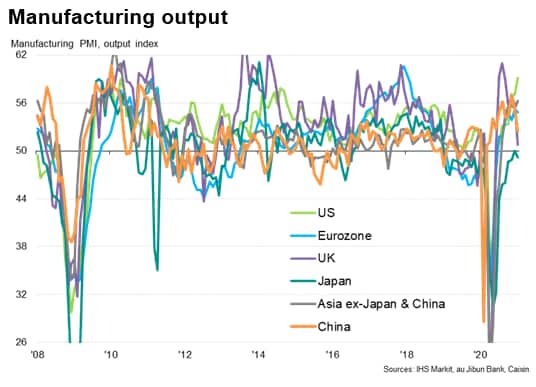 Employment meanwhile grew marginally for a third successive month, pointing to a welcome stabilisation of global factory payroll numbers after 11 months of continual decline. The turnaround in the job market in recent months not only reflects rising capacity requirements (note that backlogs of uncompleted work rose for a sixth straight month in January) but also in part reflects upbeat prospects for the year ahead. The number of optimists continued to exceed pessimists by a margin that has rarely been exceeded in the past six years, albeit losing some ground compared to November and December, in part reflecting concerns in some countries regarding further waves of COVID-19 infections. 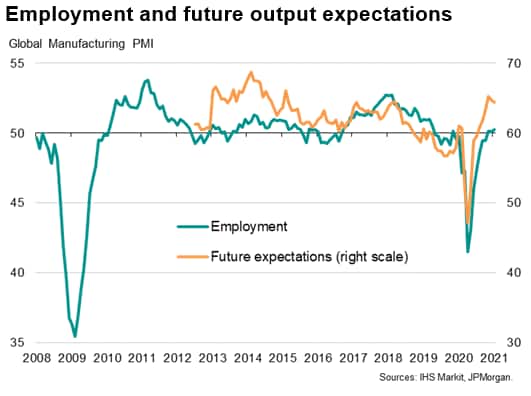 Jobs growth was led by the US followed by Italy and Brazil. Spain and Germany meanwhile saw the steepest job losses among the major economies. 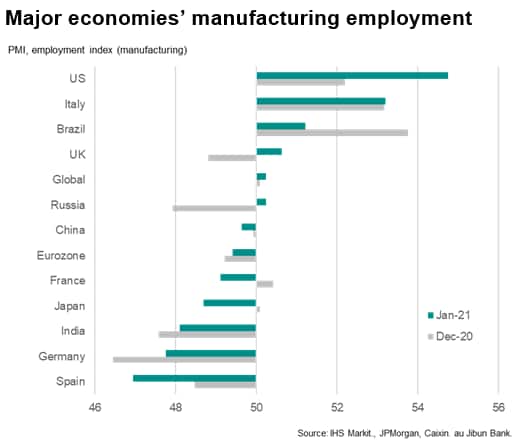 An area of concern is export growth, which came close to stalling after four months of expansion, suggesting that trade has become less of a driving force for the global manufacturing economy. 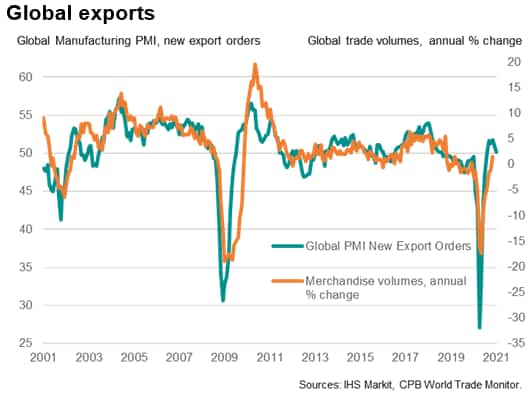 However, much of the weakening export performance could be attributable to mainland China, where goods exports fell for the first time since July, dropping at the sharpest rate since June. China's export decline contrasted with surging exports in Germany, Taiwan and the Netherlands, and more subdued but still notably strong growth in the US and India. Excluding China, global export growth even picked up a little speed in January, showing the second-steepest rise in 32 months and presenting a more encouraging picture of global trade flows. 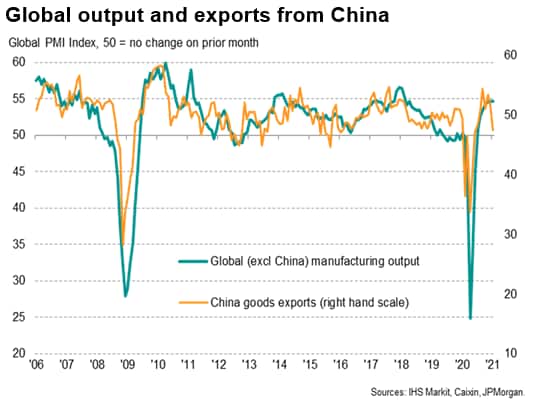 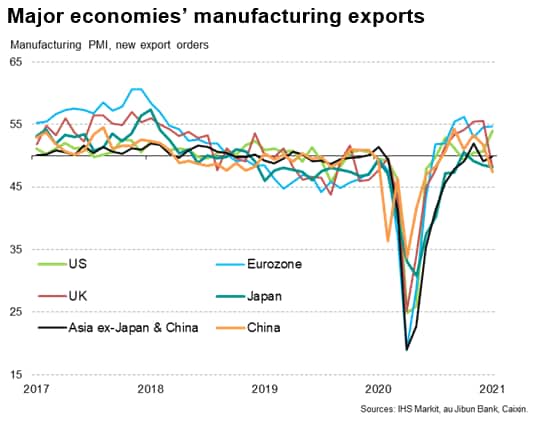 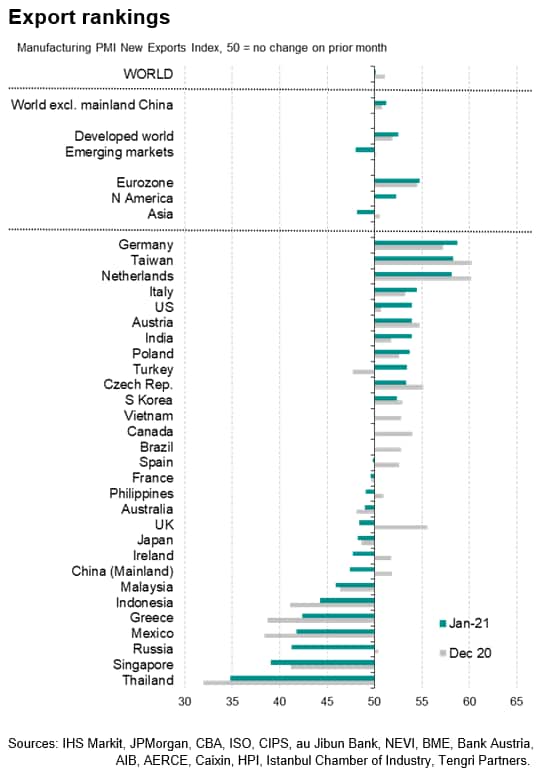 The drop in exports from China was concentrated in the intermediate and investment goods sectors, hinting that other countries may see weakened imports of such goods from China. It is not yet clear why China's exports have fallen, though anecdotal evidence collected from survey participants reported widespread shipping container shortages, virus related restrictions and a larger than usual Chinese New Year effect.

The drop in exports from China may add to existing supply issues, which have risen dramatically in recent months.

Global supply delays grew more widespread in January, the incidence of longer delivery times rising to a level rarely exceeded in the survey's 23-year history. With the exception of the supply delays seen at the height of the pandemic in March and April, and the supply issues created by the Fukushima incident in 2011, the incidence of delays in December was the highest since 2004.

Lead times for inputs lengthened in all countries surveyed with the exception of Thailand. Companies commonly reported a lack of shipping capacity, including a shortage of containers, and frequently reported bottlenecks as suppliers and logistics firms struggled to meet rising demand from manufacturers.

The highest incidence of delays was seen in the UK, linked to wider supply chain problems being exacerbated by Brexit-related shipping and transport delays after the end of the UK's transition period for leaving the EU expired on 31st December. 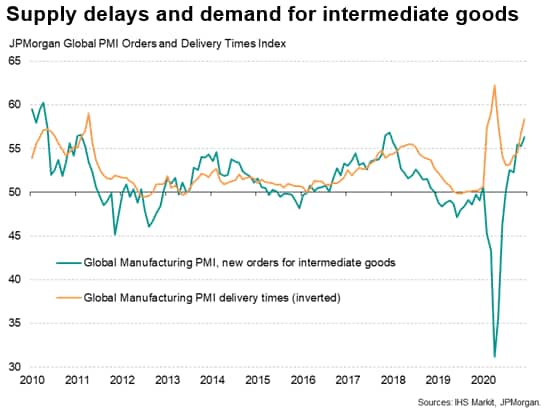 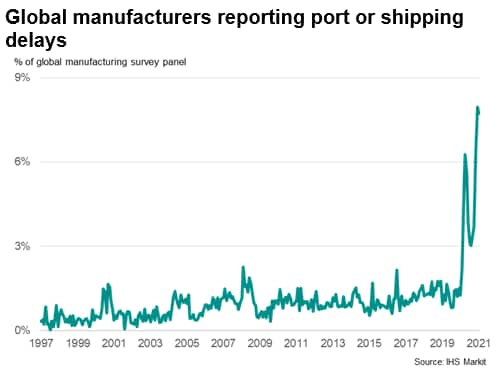 A consequence of supply shortages was further upward pressure on prices. Manufacturers' average input prices rose globally in January at the fastest pace since May 2011. Prices have now risen at an increasing rate over the past seven months, having fallen briefly between April and May amid the slump in demand caused by pandemic-related shutdowns. Price hikes were mainly attributed to increased pricing power among suppliers and shipping surcharges. 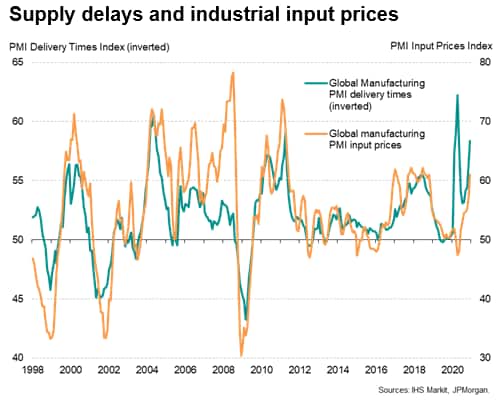 Higher costs were frequently passed on to customers in the form of higher prices. Average prices charged at the factory gate rose worldwide at the joint-steepest rate since May 2011. 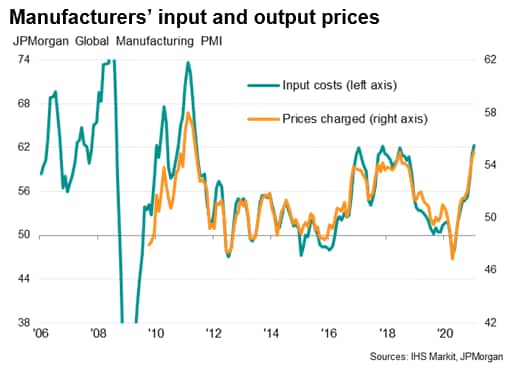