Global factory growth close to highest in a decade

Global factory output and new orders rose in November at some of the fastest rates seen over the past decade as demand continued to revive from the coronavirus disease 2019 (COVID-19) related lockdown earlier in the year. While renewed virus restrictions subdued growth in some markets, notably in Europe, hopes of a vaccine, reviving global trade and a surge in optimism in the US following the presidential elections meant business confidence about the year ahead improved markedly in November.

Combined with signs of capacity constraints being hit, the upturn in confidence led the first rise - albeit only marginal - in global factory employment for a year. However, supply chain delays worsened during the month, contributing to upward price pressures. Factory gate prices consequently rose at the fastest rate for two years. 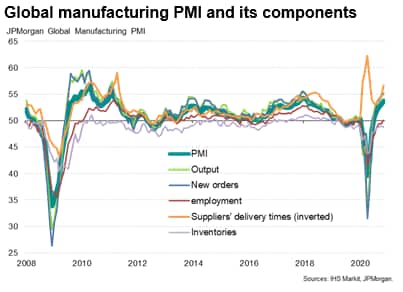 The JPMorgan Global Manufacturing PMI, compiled by IHS Markit from its proprietary business surveys, rose from 53.0 in October to 53.7 in November, its highest since February 2018. The PMI has now risen continually since hitting a low in April, at the height of global pandemic lockdowns, led by improving trends in output and new orders. Both of these key metrics rose in November at the fastest rates since January 2018, that were also among the strongest recorded over the past decade.

Since February 2011, only December 2017 and January 2018 saw marginally faster global output growth than that recorded by the latest survey.

The improvements signalled by the PMI in recent months suggest that manufacturing has continued to recover the output lost during lockdowns earlier in the year. The PMI's output index has now risen to a level broadly indicative of global factory output growing at an annualised rate of 5%*, indicating a robust recovery. 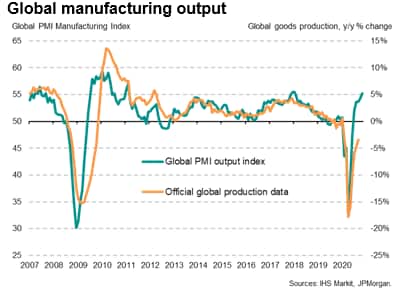 Note that the latest available official data suggest that global production was running 3.5% below the level of a year ago in September, which compares well with a peak annual rate of decline of 17.8% seen in April. Both the PMI and the official data therefore indicate that the recovery from the pandemic is so far looking faster than the recovery seen during the global financial crisis.

*Since 2007, when IHS Markit's PMI data for the United States were first included, the global PMI's output gauge has exhibited an 83% correlation with the annual rate of change of official production data, achieved with the PMI acting with a lead of three months. Importantly, the PMI is also published several months ahead of the comparable official data, underscoring how the PMI provides a very accurate advance guide to changing output trends.

An OLS regression can be used to determine what a PMI reading implies in terms of growth, estimated as follows:

Brazil continued to lead the global production upturn for a second consecutive month, followed by Germany and India. All three countries reported especially strong growth as order books continued to rebound strongly, albeit with output rising at slower rates than seen in September in all three cases.

The US meanwhile moved up into fourth place in the rankings, reporting a marked acceleration in production growth to the fastest for just over six years in November.

The improvement in the US pushed its rate of expansion ahead of that seen in the eurozone, where growth divergences widened across the single currency area. Germany was the stand-out performer while France and Spain fell back into contraction, with declines often linked to demand having been hit by rising COVID-19 infection rates and renewed 'lockdown' measures by national governments. Although overall eurozone output growth remained robust, thanks mainly to Germany, the increase was the smallest seen since July.

The UK continued to report strong growth, albeit down from sixth to seventh place in the global rankings, though the increase was in part fuelled by the ordering of goods ahead of the Brexit transition at the end of the year, notably from customers in the EU.

Manufacturing output growth in Asia accelerated to the fastest since January 2011, despite Japan remaining in contraction. While India was once again the fastest growing Asia Pacific manufacturing economy, robust - and accelerating growth - was also seen in Taiwan and China. The latter notably saw output growth accelerate to the fastest since November 2010. Indonesia and the Philippines meanwhile moved back into expansion and growth also accelerated in Australia and South Korea.

Asia as a whole nevertheless continued to lag behind North America and the Eurozone in terms of factory output growth.

In all, 11 of the 30 countries for which November data are currently available reported falling output, up from nine in October, with Greece replacing Mexico at the foot of the rankings to report the steepest monthly loss of output of all surveyed countries. In addition to France and Spain, Turkey, Poland and Vietnam were all also notable in sliding back into contractions. 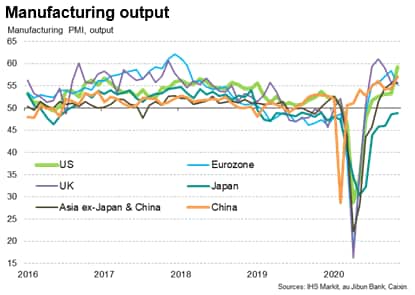 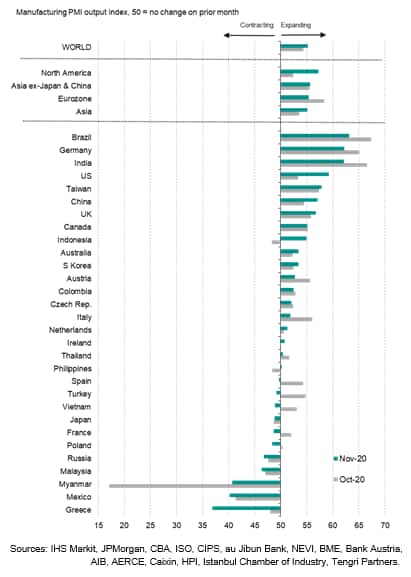 A key contributor to the relatively swift return of robust global manufacturing growth in the recent months has been a revival in worldwide goods trade. Whereas it took eight months for the global PMI's new export orders index to show a return to growth after bottoming out at the peak of the global financial crisis, 2020 saw exports return to growth after just five months after the low point seen in April. 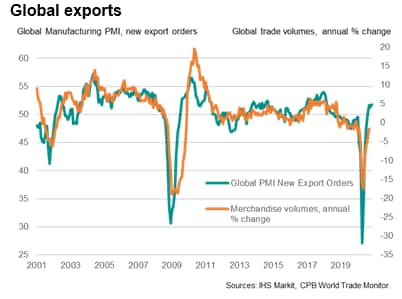 Optimism fuelled by vaccine hopes and surge in US sentiment

More encouragingly, manufacturers' optimism about the year ahead improved in November to the highest since February 2015. Sentiment strengthened in the wake of promising news on COVID-19 vaccine developments during the month, as well as a notable upturn in the US following the presidential elections. Future optimism in the US surged to the highest for almost six years. However, sentiment also picked up in the Eurozone, the UK, Canada, Russia and Brazil, though lost some ground in China, India and Japan. 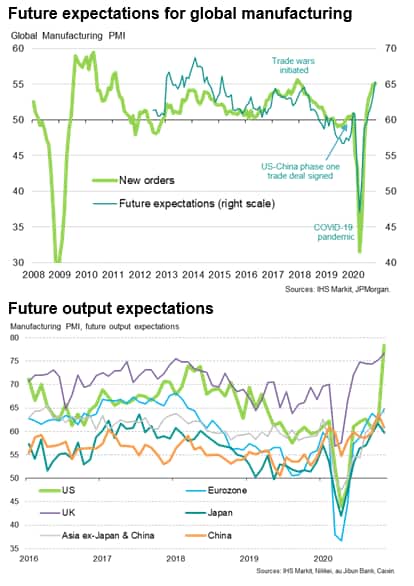 Higher inflows of new orders meant firms increasingly struggled to meet demand, hence backlogs of work rose at the steepest rate since January 2018. Employment also rose as firms sought to boost capacity to meet the higher workloads. Although only very marginal, the global increase in factory payroll numbers was the first seen for a year. 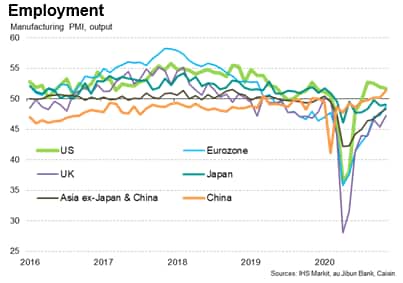 Looking at the major economies, jobs growth was focused on the US and China, with the latter notable in reporting the strongest gain for a decade. However, the rate of job losses moderated in Asia ex-Japan and China and in the UK and Eurozone.

A consequence of the recent recovery of manufacturing has been a strengthening of industrial prices. The stretching of capacity signalled by the increase in manufacturers' backlogs of work was mirrored by a lengthening of supplier lead times, as suppliers increasingly struggled to provide inputs to manufacturers on a timely basis due to the recent upturn in demand. With the exception of the height of the pandemic through February to May, when widespread temporary factory closures were reported around the world, the incidence of supply chain delays in November was the highest since April 2011, when supply chains were hit by the Fukishima incident.

These higher costs were often passed on to customers, driving worldwide factory gate prices higher at a rate not seen since October 2018. 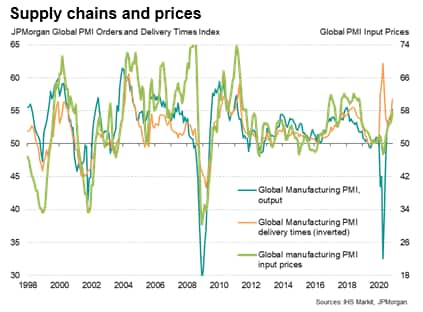