Global factory output rose at the fastest rate for two and a half years in October, signalling a strong start to the fourth quarter that builds on a recovery seen in the third quarter. Expansion was seen across the world's major markets, led by the Eurozone, with the exception of a decline in Japan, though even here the downturn eased. Of particular note, Asia excluding China and Japan - which has lagged the global recovery- saw output growth hit the highest since April 2011.

Although firms remain optimistic that business conditions will improve further one year from now, the nearer-term stays highly uncertain for many companies amid rising COVID-19 infection rates. Some notes of concern about the sustainability of the upturn were also raised by global trade growth cooling slightly and employment continuing to fall.

The JPMorgan Global Manufacturing PMI, compiled by IHS Markit from its proprietary business surveys, rose from 52.4 in September to 53.0 in October, its highest since May 2018. 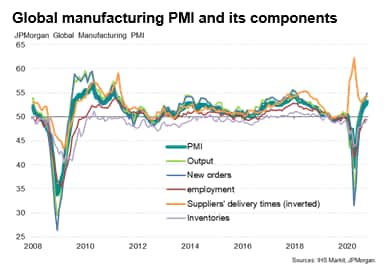 Of the PMI's five components, output rose in October at the fastest rate since February 2018, driven by the sharpest increase in new orders since January 2018.

The improvements signalled by the PMI in recent months suggest that the sector has continued to recover the output lost during lockdowns earlier in the year. The PMI's output index, which measures monthly changes in production volumes, has now risen to a level broadly indicative of global factory output rising at an annualised rate of 4.3% [*] , indicating a robust rate of recovery at the start of the fourth quarter, building on the expansion seen during the third quarter. By comparison, the latest official data indicate that global factory production remained 5.0% lower than a year ago in August, but that represents a big improvement on the 17.8% annual decline seen at the height of the pandemic back in April. 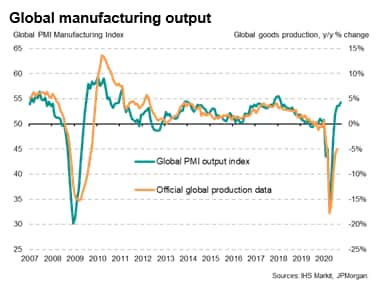 Looking at the world's major economies and markets, the production upturn was led by manufacturers in the euro area, where factory output surged higher at its fastest rate for just over two and a half years. Growth was especially strong in Germany, reflecting a record inflow of new orders during the month.

Output growth also accelerated slightly in the US, to the fastest for almost a year, and also gained a little further momentum in China, albeit remaining below the highs seen during the third quarter. Japan meanwhile remained in contraction, though saw the rate of decline eased further to the mildest for almost a year.

Of particular note, Asia excluding China and Japan - which as a whole has lagged the global recovery- saw output growth accelerate to the highest since April 2011, led by production in India expanding at a rate exceeded only once since the survey commenced in 2005.

The UK, which had seen especially strong output growth in prior months, saw a marked cooling in the rate of expansion, though continued to notch up solid growth, albeit helped in part by export orders rising ahead of the country's scheduled departure from the EU's single market at the end of the year. 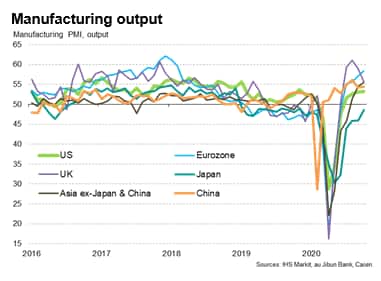 The forward-looking indicators from the survey also improved in October. First, business expectations for the coming year (notably in being the only subjective metric monitored by the PMI surveys) rose for the sixth straight month to register the highest degree of optimism since May 2018. This optimism commonly reflected hopes that vaccines or treatments for COVID-19 will become widely available within the coming year, allowing the return to more normal ways of life.

Second, a jump in new orders of a magnitude not seen since January 2018 led to an increase in firms' backlogs of work, which rose at the fastest rate since June 2018. Note that firms typically boost production when backlogs rise. 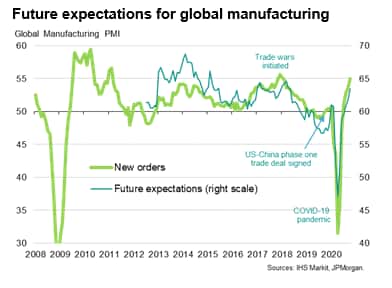 However, two of the PMIs indicators relating to global trade flows and employment sounded notes of caution.

New export orders growth moderated slightly in October, hinting at a slowdown in the pace of global trade recovery. Weaker export orders in some firms were linked to the initial rebound from second quarter lockdowns starting to fade, especially as rising COVID-19 case numbers reportedly dampened demand in some countries. 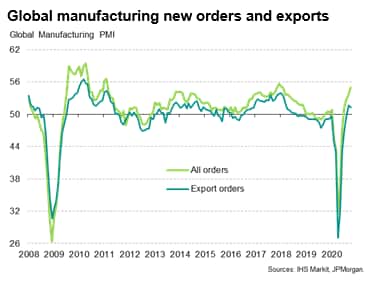 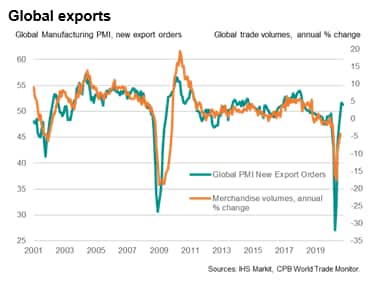 A second note of concern came from a further decline in global factory employment during the month. Although the rate of job losses was only marginal, the latest decline marked nearly one year of job shedding.

While - as noted above - expectations for output one year from now remained buoyant, the further pressures on headcounts reflected increased anxiety about the sustainability of the upturn in the coming months amid rising COVID-19 infection rates in many countries, as well as some natural waning of demand that had built up during lockdowns.

The lack of jobs growth also looks unusual given the recent upturn in backlogs of work. Normally this pressure on operating capacity would drive renewed job creation.

While companies remain optimistic that an end to the pandemic is in sight within a year, it looks like they are taking precautions to avoid expanding capacity in case of a set-back in the next few months, awaiting more news on the course of the pandemic. With virus numbers rising in many countries, and COVID-19 containment measures set to tighten globally, such caution seems warranted. 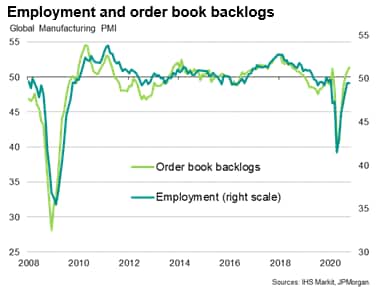 *Since 2007, when IHS Markit's PMI data for the United States were first included in the index, the global PMI's output gauge has exhibited an 83% correlation with the annual rate of change of official production data, achieved with the PMI acting with a lead of three months. Importantly, the PMI is also published several months ahead of the comparable official data, underscoring how the PMI provides a very accurate advance guide to changing output trends.

An OLS regression can be used to determine what a PMI reading implies in terms of annual growth. The implied annual growth rate can be estimated as follows: