Most of the October reports focused on the current energy crisis and the resulting impacts on power markets. As IHS Markit's recent report on "The 2021 energy crunch: A crisis of surplus capacity" states, with the world exiting the COVID-19 pandemic, demand has been sprinting while supply is mostly limping. International gas and coal prices are trading at unprecedented highs with extreme volatility; and while companies and governments are focused on increasing supply to try to avoid or minimize the pain of demand destruction, the options for raising supply are mostly constrained across energy sources. The commoditization of energy has reduced the incentive to invest in spare capacity, and flexible supply—which protects markets from extreme volatility—has been gradually eroded across fuels.

At the same time, weather-related variation in the power sector—which includes variations in renewable generation and demand from heating and cooling—also impacts fuel markets and exacerbates volatility. IHS Markit's report "Weather-related variation in the electricity system: Implications for gas and coal demand" estimates that monthly variation in the call on thermal generation due to weather over the next six months in China, Europe, and the United States will exceed 20 TWh in each market, equivalent to 4 Bcm of natural gas or 8 million metric tons of coal.

The energy crisis is being felt worldwide

IHS Markit's report "China's power rationing risk: Tight fuel supply this winter, declining reserve margin in the next few years" discusses the coal shortage-induced electricity crunch in China, noting that the situation is expected to persist throughout this winter while growing demand, restriction of new coal-fired power, and rapid renewables additions will lead to declining reserve margins over the next few years. 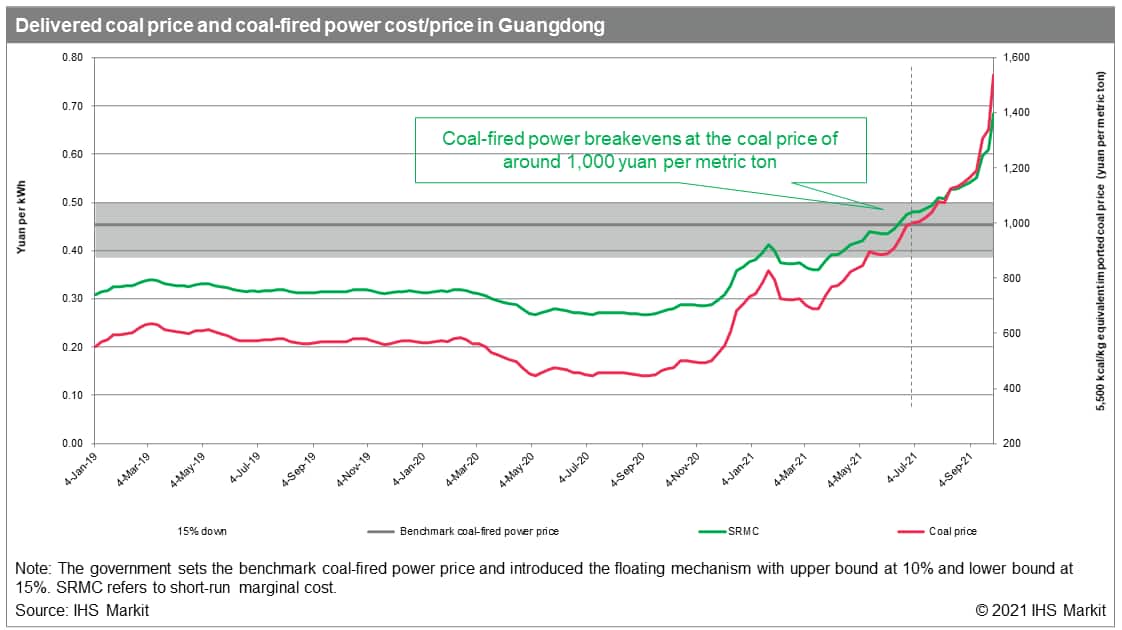 According to IHS Markit's report "China's "dual-control" implementation: A tight balancing act amid the energy transition", meeting 2021 dual-control targets was also an important driver of power rationing in China. While dual control-induced power rationing is expected to be short-lived, the mechanism will remain a primary long-term policy tool to meet China's energy and climate targets. IHS Markit's report on "China's winter energy supply policy: What does "secure supply at all costs" really mean?" notes that in the wake of the September power shortages in China, top government officials are calling for "secure supply at all costs" with focus on guaranteeing supply to the residential sector.

Elsewhere in Asia, IHS Markit's report on "India's power crisis: Assessing the drivers, impact, and adequacy of policy response" discusses the power crisis in India during August-October 2021, owing to the domestic coal shortages. The impact of the supply crunch led to a sharp jump in power prices in the short-term market, with power prices in the power exchange reaching a ceiling of $285/MWh (20 Indian rupees per kWh) for several hours during the day, driving up average monthly spot prices to a five-year high. The report notes that the pressure may continue in October to early November owing to festive demand. However, with the approaching winter season and suppressed cooling demand, the situation is likely to improve and ease off in November-December.

In Europe, IHS Markit's report "Analysis of the European power price surge and short-term outlook: Insights from the October 2021 Planning Case" explores the recent power price surge—driven by commodity prices—where in the third quarter of 2021, wholesale power prices averaged €97/MWh in Germany and France and €118/MWh in Spain, shattering all-time records with previous highs dating back to the third quarter of 2008 for Germany and Spain at €73/MWh and €70/MWh, respectively, and the fourth quarter of 2008 for France at €78/MWh.

The current spike in spot prices at global gas hubs and for LNG shipments worldwide is also impacting Latin America. IHS Markit's report "Plentiful, inexpensive, and reliable? The effect of high global gas prices on Latin American markets" discusses the current situation and how, if high prices persist, they could shake the region's perception of gas as a plentiful, inexpensive, and reliable fuel.

Meanwhile, as countries gathered at the United Nations Climate Change Conference of the Parties (COP26), action on climate and clean energy continued in the midst of the energy crisis.

As IHS Markit's report "China kicked off renewable mega base development for its climate ambition: 100 GW of wind and solar predominantly in the desert area" describes, President Xi Jinping announced in October that China has kicked off the first batch of wind and solar mega base development totaling about 100 GW, focused predominantly on the desert area, with more expected as China reshapes its industrial and energy portfolio and aims to bring its total installed wind and solar capacity to over 1,200 GW by 2030.

Also in October, as discussed in IHS Markit's report "South Korea raises 2030 climate ambitions ahead of the UN climate conference", South Korea confirmed that it will set a tougher goal for cutting greenhouse gas emissions, with the new nationally determined contribution target aiming for a 40% reduction below 2018 levels by 2030. Meanwhile, according to IHS Markit's report "Indonesia sets 2060 net-zero ambition, but the power sector does not appear strongly committed yet", while Indonesia's Long-Term Strategy for Low Carbon and Climate Resilience 2050 targets net zero by 2060, solid execution policies or practical solutions to safeguard the target are still lacking.

Corporate renewable procurements are also driving the demand for renewable energy. According to IHS Markit's report "Corporate renewable procurement in Southeast Asia: Current opportunities and outlook", the volume of signed corporate power purchase agreements in Southeast Asia has grown by more than 20 times in the past five years and corporate demand for renewable energy is forecast to log at least a 100-fold increase over the coming decade.

Rama Zakaria is an associate director in the Global Power and Renewables team at IHS Markit.