The latest forecast from the US Energy Information Administration (EIA) reinforces messages that have been coming for the past year from international bodies, independent analysts, and climate advocates: at its current trajectory, humanity will fall far short of the Paris Agreement goal of reaching net-zero emissions by 2050.

EIA's conclusion in its "International Energy Outlook 2021," released 6 October is that global energy demand will rise by 50% between 2020 and 2050, and carry annual CO2 emissions from this sector 24.7% higher.

EIA projects that renewable energy will make significant inroads in the global power mix by 2050, rising by 3.3% per year (compared with 1% for oil and 0.9% for natural gas). It says that batteries will contribute to reliability. Yet it states that gas and coal will be needed to meet power demand as well.

Considering all end uses for energy—residential, commercial, industrial, and transportation—fossil fuels still will provide a large share, particularly for industry and transportation in 2050. However, it is worth noting that EIA places renewables' share of energy consumption (235.2 quadrillion Btu) nearly on par with hydrocarbon-based liquid fuels (248.5 quadrillion Btu), and ahead of gas and coal. 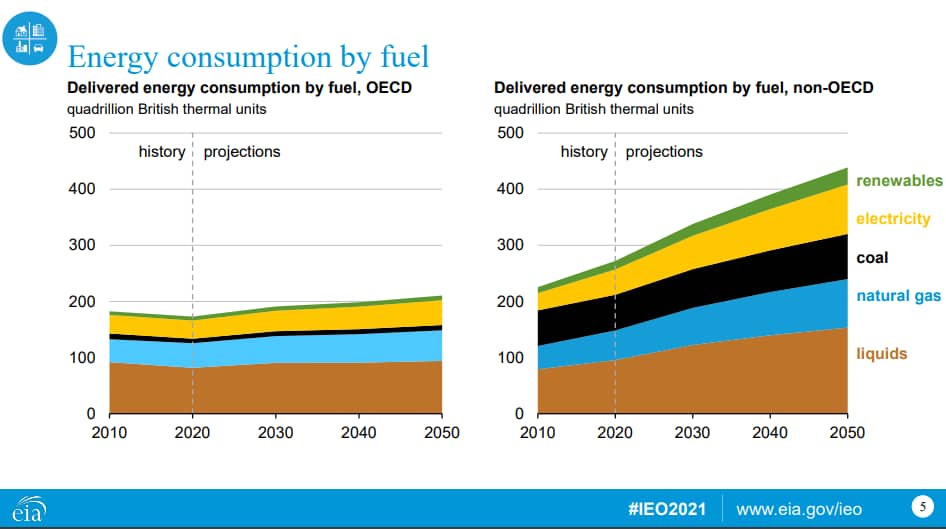 Rising consumption of fossil fuels will overwhelm the improvements anticipated in the carbon intensity of energy production and usage, thus leading to the net gain in CO2 emissions. 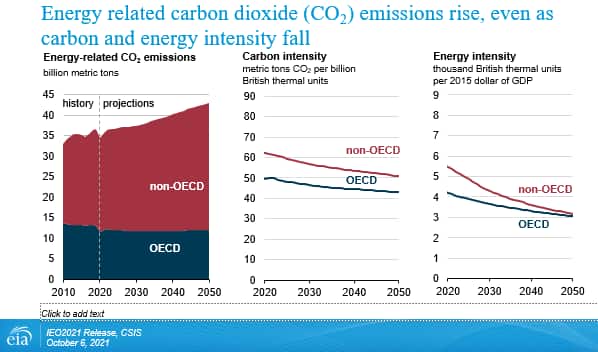 IHS Markit has been modeling global energy use and carbon emissions trends, taking into account the same technological advances, price forecasts, and potential policies that EIA has reviewed.

IHS Markit's latest forecast is somewhat more optimistic than EIA's in terms of handling carbon emissions, but nonetheless identifies a large gap between what's needed to minimize the impact of climate change, and where industry and consumer use seems to be taking carbon emissions. The IHS Markit base case, known as "Inflections," was updated this summer.

"Inflections shows growth in energy demand to 2050 of approximately 25%, but this is against a background of a global population increasing by approximately 2 billion, with most of those in emerging markets," Paul McConnell, research and analysis executive director, energy-wide perspectives, said. "Inflections does show a decline in GHG emissions over that same period, indicating the energy transition is well underway. But it's not enough to meet the goals of the Paris Agreement, nor reach net-zero emissions by 2050."

EIA broke down its forecast into two categories: the 38 developed countries that belong to the Organisation for Economic Cooperation and Development (OECD), and the non-OECD nations.

This divide carries added significance heading into the UN COP26 meeting next month in Scotland, where pressure will be on the world's wealthy countries, which have generated most of carbon emissions historically, to commit to deeper emissions cuts.

Carbon Tracker's analysis indicates that the world has already emitted 86% of the CO2 it can release if global warming is to be limited to 1.5 degrees Celsius, the goal of the Paris accord.

Aiming to meet that Paris goal, 90 nations plus the 27-state EU have announced tougher Nationally Determined Contributions (NDCs) in the last year. But analysis by the UN's climate agency in September found that those pledges would not reach the 2030 goal of a 45% cut in GHG emissions—and that's even if all of the NDCs were achieved. The UN report analyzed NDCs from 113 countries that represent 49% of annual global emissions (both OECD and non-OECD countries), finding that their total GHG reductions will increase about 12% from the 2010 baseline by 2030.

EIA's outlook, which spans 195 countries, sees a continuation of that upward trend. Its base case sees CO2 emis­sions from non-OECD countries increasing by 35% by 2050 compared with 2020 levels plus a 5% rise in OECD countries.

For non-OECD countries, EIA projects net CO2 emis­sions will increase by 4.2 billion mt between 2020 and 2035, fol­lowed by an increase of 3.7 billion mt between 2035 and 2050, with the slower growth in the second half of the projection period "largely linked to increases in renewable energy and energy efficiency."

On the positive side, EIA predicts rapid adoption of electric vehicles (EVs) across the OECD, contributing to a flattening of emissions from the transportation sector.

EIA said sales of internal combustion engine vehicles would peak in 2023 in OECD countries and in 2038 in non-OECD nations. The net result will be an estimated 780 million plug-in electrics or hybrids by 2050 across the OECD and non-OECD nations, out of about 2.1 billion light-duty vehicles. 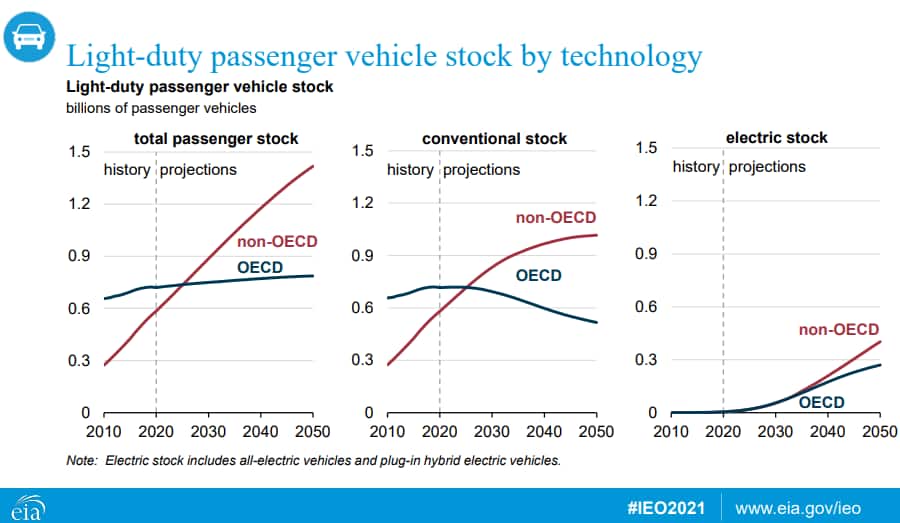 In the power generation arena, EIA said all post-2020 generation growth in OECD regions will come from renewables, with solar and wind "displac[ing] an increasing share of existing non-renew­able, mostly fossil fuel-based, sources."

For non-OECD regions, renewables will account for about 90% of new generation from 2020 to 2050. Because these nations will experience greater population growth and are continuing to provide energy to under-served parts of their population, their energy consumption growth rate will be 2.4% per year, compared with 0.6% in the OECD.

The US, Russia, Canada, and OPEC will meet those needs with overall increases of 50% in crude oil production. 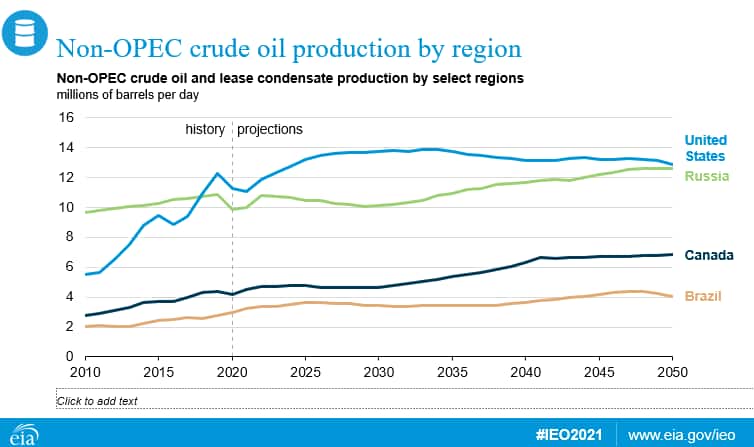 On the gas side, the picture is similar. Global growth will be 0.9% per year through 2050, or a total of 30% during the period, to reach 186 trillion cubic feet/year. Non-OECD nations' needs will grow at 1.2% annually, compared with 0.5% for OECD countries.

New demand for gas will present opportunities for all of the world's leading exporting nations and regions. 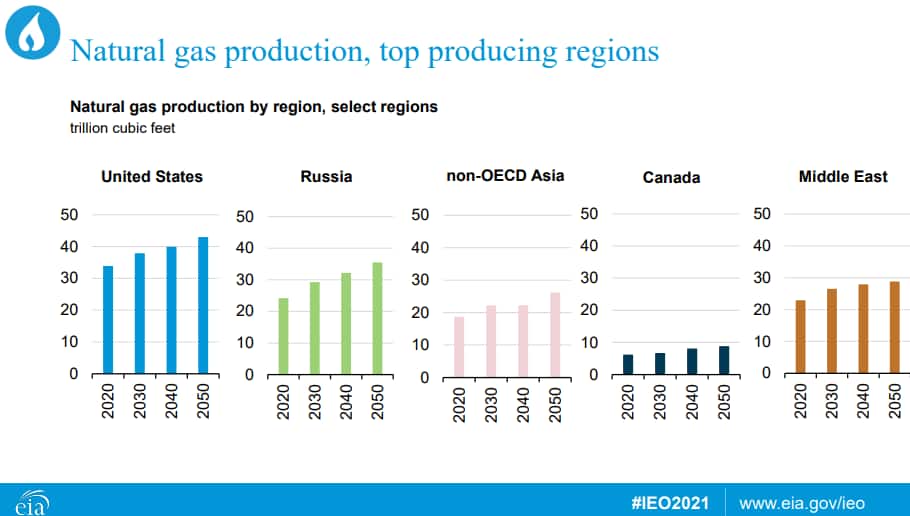