Global economy slumps at steepest rate since 2009 as coronavirus hits

Worldwide growth plunged by a record extent in February, the pace of expansion slowing to the weakest since May 2009, according to the latest PMI surveys. The deterioration was predominantly linked to the coronavirus outbreak and led by a survey-record slump in activity in China. Growth across the rest of the world meanwhile came close to stalling, registering the weakest expansion since September 2012.

Steep downturns were also seen in Japan and Hong Kong SAR and to a lesser extent in the US. Greater resilience was seen in the UK and eurozone. India meanwhile enjoyed the strongest expansion, with growth hitting an eight-year high, bucking a wider emerging market malaise.

By sector, the slump was broad-based, with notable downturns for consumer services - linked in many cases to reduced travel and tourism - and investment goods production, the latter reflecting heightened business uncertainty.

The JPMorgan Global PMI™ (compiled by IHS Markit) fell by a record 6.1 points in February, down from 52.2 in January to 46.1, its lowest since the height of the global financial crisis in May 2009. The latest reading is comparable with global GDP rising at an annual rate of just over 0.5% (at market prices), down from almost 3% back in January. 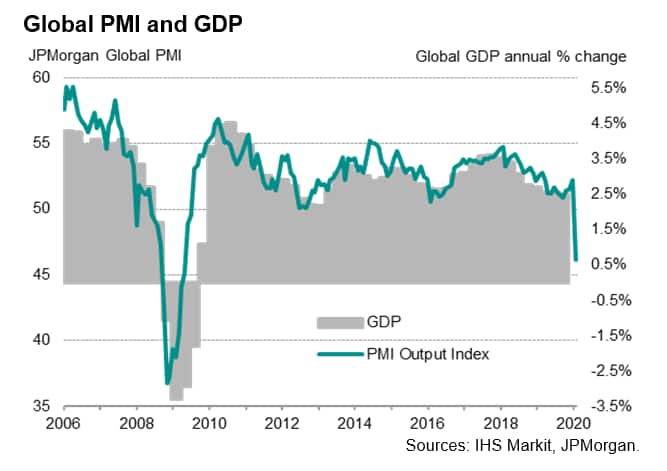 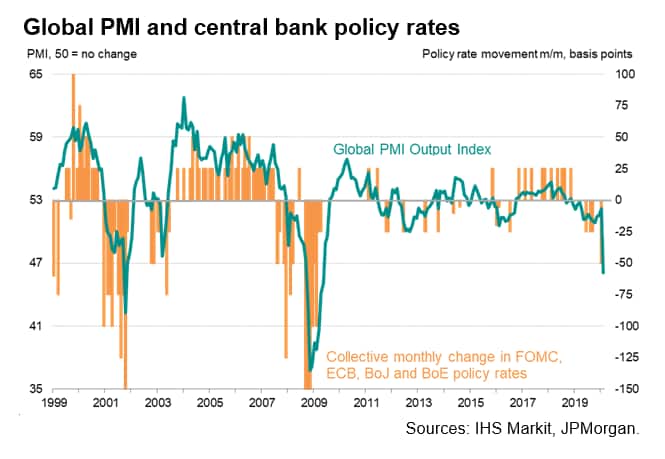 The steep decline in economic activity signalled by the PMI represents a marked set-back after signs of the global economy having picked up growth momentum to reach a ten-month high in January.

The slowdown was linked primarily to businesses across both manufacturing and services being affected by the coronavirus outbreak, particularly in China, where a record fall in output was recorded.

Excluding China, the composite PMI merely fell from 52.3 to 50.1, albeit still indicating a near-stalling of business activity and the weakest expansion since September 2012.

Manufacturing output fell globally at the fastest rate since April 2009, while service sector activity slumped to a degree not seen since May 2009. Excluding China, manufacturing saw only a marginal decline in production after a modest rise in January, while service sector output rose fractionally, though the latter was notable in being the smallest gain since September 2012.

February also saw a joint-record fall in the global PMI's new orders index to leave the series at its lowest since April 2009. Both manufacturing and service sectors reported the steepest drops in new business since 2009, with both sectors also reporting steep losses in export orders.

Levels of outstanding business rose marginally despite the drop in new orders, in part due to difficulties fulfilling production at some firms due to supply shortages. Global supply chains lengthened to the greatest extent since 2011, indicating widespread shortages of inputs to factories.

Employment fell marginally, down for the first time globally since last October, led by the steepest loss of factory jobs since August 2009. Service sector job gains meanwhile slipped to a four-month low. The overall reduction was led by China, which saw a record drop in employment, but payroll numbers continued to rise elsewhere on average. 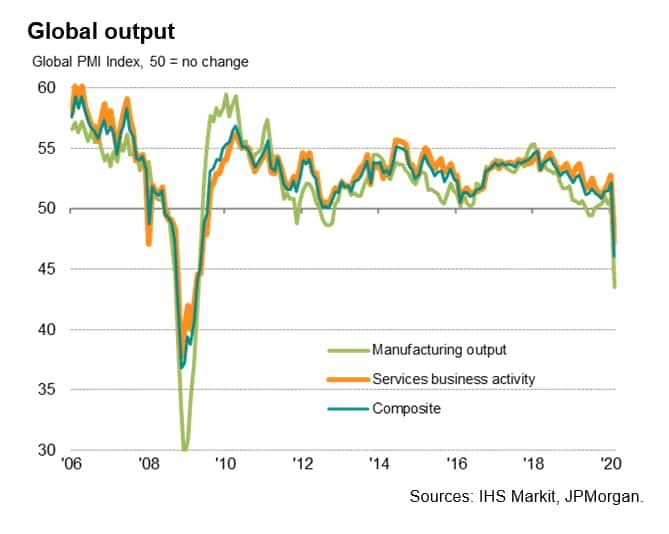 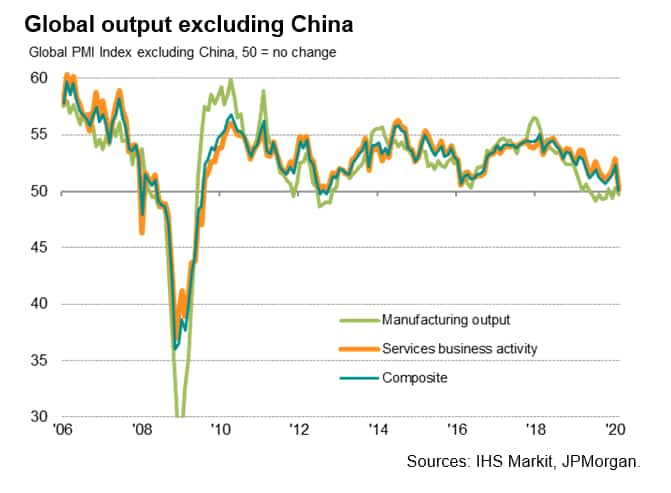 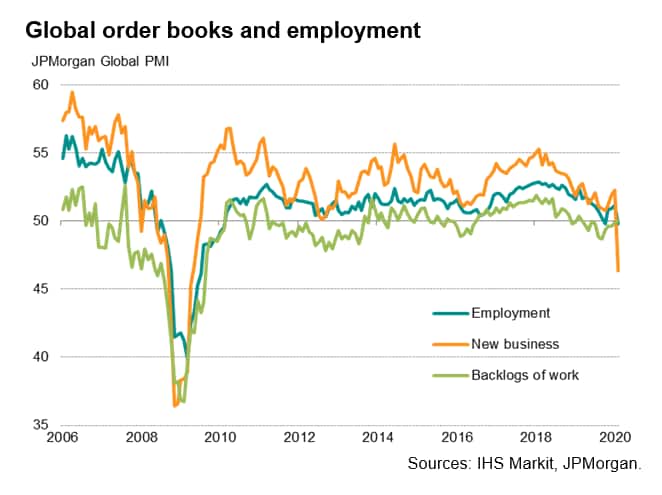 Price pressures eased alongside the weakening of demand. Average input prices rose at the slowest rate since last September, attributable in part to one of the slowest increases in operating expenses at services firms over the past five years.

Average prices charged for goods and services also rose at the slowest rate for five months, commonly reflecting the need to cut prices to boost demand in both sectors, though most notably in manufacturing. 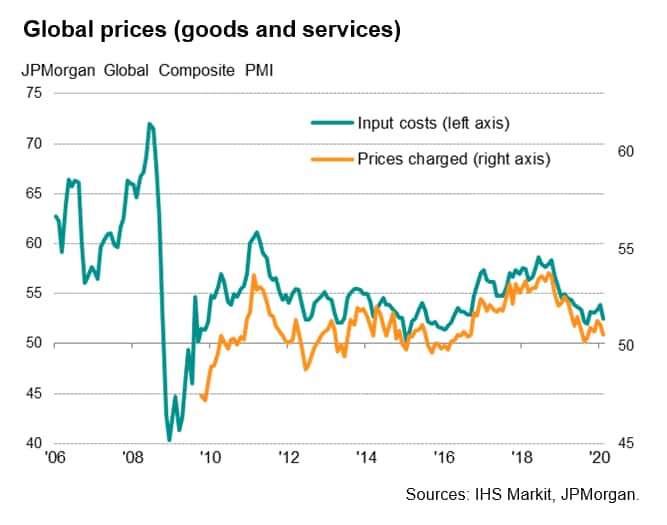 China led the downturn with the composite PMI, produced by IHS Markit for Caixin, falling from 51.9 in January to an all-time low of 27.5. Record declines were seen for both manufacturing and service sector output amid extended factory closures and travel restrictions designed to impede the spread of the coronavirus. Survey-record falls were also seen for new business, exports and employment, though backlogs of work rose at a record rate to suggest some pent-up activity.

Looking at the major developed markets, Europe showed greater resilience to the coronavirus, but both the US and Japan fell into decline, the latter showing an especially sharp downturn.

In the US, the IHS Markit PMI surveys signalled the first (albeit mild) drop in business activity since the 2013 government shutdown, representing the second-worst month since the global financial crisis. Manufacturing output was close to stalling, while service sector activity slipped into decline. In addition to the coronavirus affecting some companies, firms also reported growing uncertainty regarding the upcoming presidential election and the prospect of weaker economic growth in general as having dampened activity. The US PMI data are consistent with annualised GDP growth slumping from around 2% at the start of the year to just 0.7% (or 0.1-0.2% on a quarterly basis) midway through the first quarter.

The UK enjoyed the strongest growth of the largest 'G4' developed economies, seeing a sustained post-election rebound in growth. The survey data indicated the strongest expansion of business activity for almost one-and-a-half years in February, consistent with quarterly GDP growth of just over 0.2%, up from stagnation in the fourth quarter of last year. The service sector upswing lost some of its bounce, however, in part due to coronavirus related disruptions and supply shortages limiting the ability to fulfil orders. Uncertainty regarding the UK's trading relationship with the EU was also widely cited as a risk to the outlook.

Sustained growth was also recorded in the eurozone, with the overall rate of expansion picking up slightly to a six-month high, largely on the back of rising domestic demand. Growth picked up in France, Italy and Spain but weakened in Germany. Increased service sector activity was accompanied by signs of the manufacturing downturn easing. However, exports of both goods and services fell at increased rates due to virus-related downturns in demand, and increasingly widespread delivery delays threatened future production. While the PMI data so far for the first quarter are signalling a 0.1-0.2% increase in eurozone GDP, there are clear downside risks which point to a likely weakening of the economy in March.

Business activity in Japan contracted at the sharpest rate since the prior sales tax hike in 2014, with orders not only dampened by the ongoing effect of last year's tax rise but also impacted by the coronavirus. A deepening manufacturing downturn was joined by one of the sharpest slumps in service sector activity since the global financial crisis.

Looking at other emerging markets beyond China, Hong Kong SAR reported an especially severe downturn as a result of coronavirus-related disruptions, and growth slowed in both Brazil and Russia, down to the joint-lowest for eight months and the lowest for seven months respectively. India bucked the slowdown, enjoying the strongest expansion for eight years as prior fiscal and monetary stimulus measures showed signs of boosting demand. 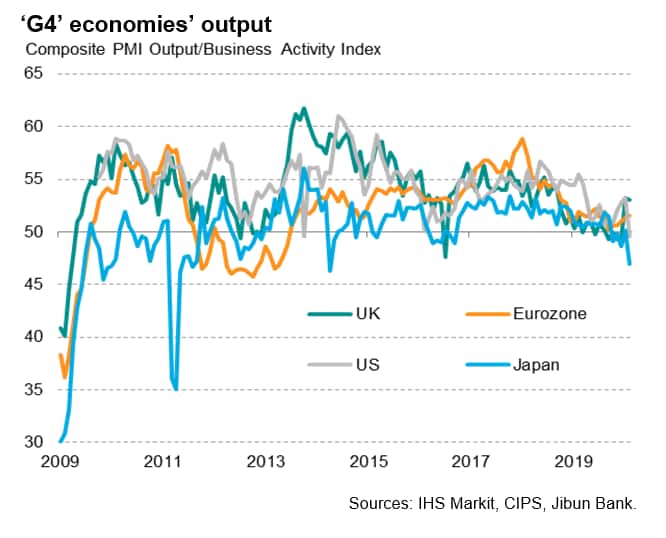 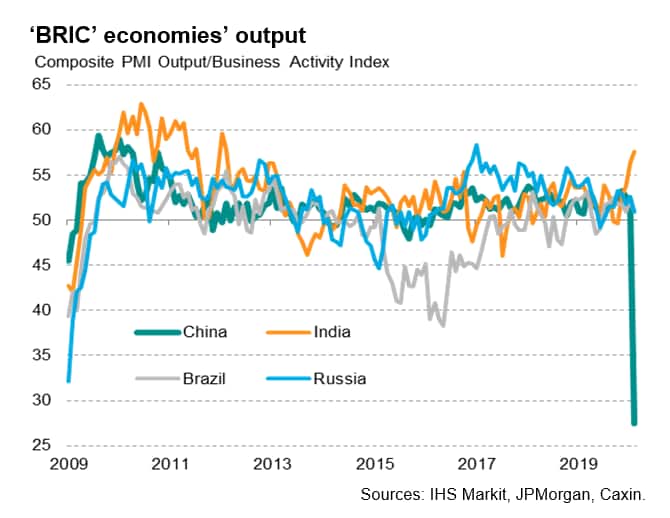 Analysis of anecdotal evidence collected alongside the PMI survey results highlighted that reasons cited for deteriorations in output, orders or other variables were most commonly associated with the coronavirus in Hong Kong SAR and China, followed by South Korea, Taiwan and Singapore. The US saw the lowest incidence of coronavirus-related hits to business, followed by the UK, though even in the US some one-in-ten reasons for lower output or orders were linked to the virus outbreak. 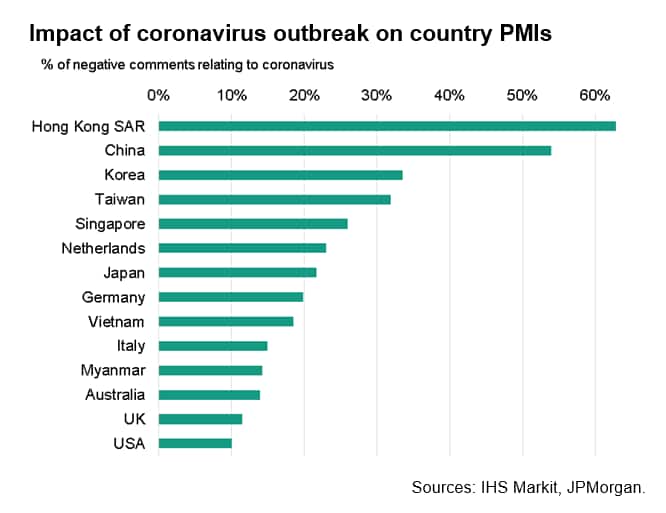 Output fell across all main categories of goods and services at the fastest rates recorded since sector data were first compiled in October 2009.

The steepest decline was seen for investment goods, such as plant and machinery, which reflected a marked deterioration in capex spend globally as business uncertainty spiked higher. Output of intermediate goods also fell sharply, reversing the steadying trend seen in recent months. Output of consumer goods, which had been the strongest area of manufacturing during the 2018-19 trade-war slowdown, meanwhile fell for the first time in the survey's history.

In the service sector, the steepest downturn was recorded for consumer-facing services, with widespread reports of falling tourism and travel numbers hitting many companies. The smallest decline was seen in financial services, though even here the decline was the steepest since 2009. 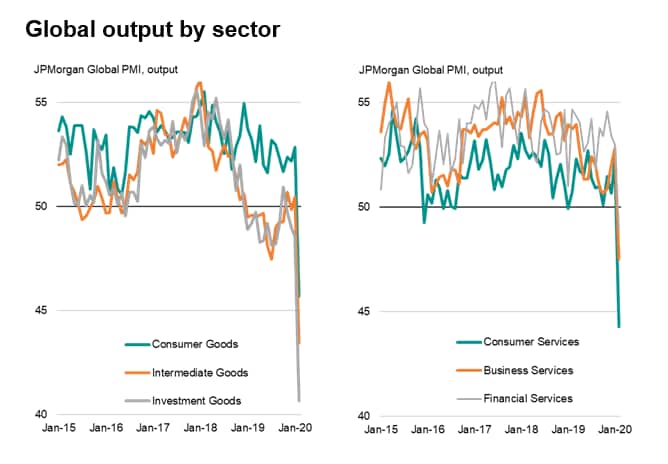 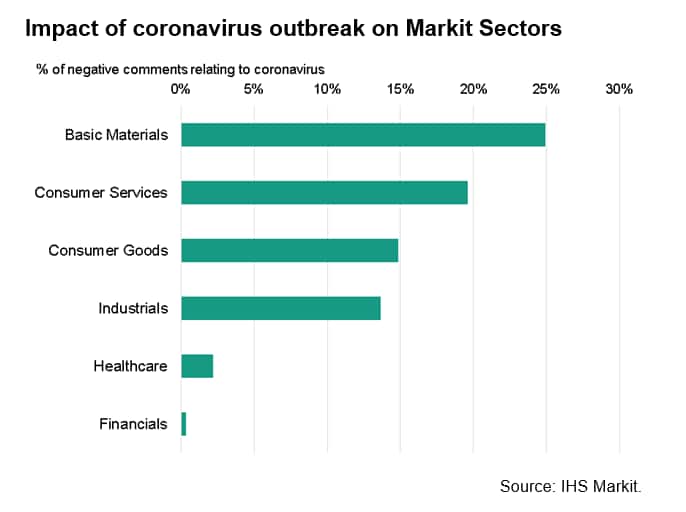