The global economy started 2019 with the weakest monthly expansion of business activity since September 2016. The JPMorgan Global PMI, compiled by IHS Markit, hit a 28-month low of 52.1, down from 52.7 in December, extending a slowdown that had been evident throughout 2018 into the new year. 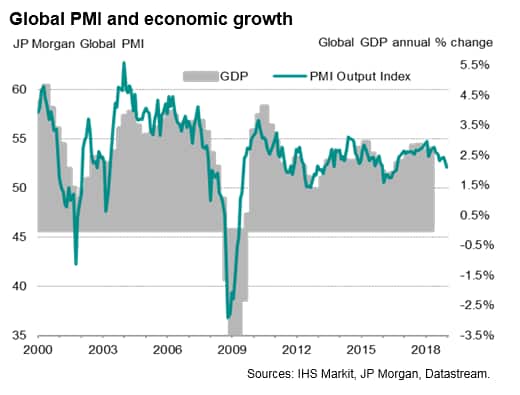 Manufacturing led the slowdown, with factory output rising at the slowest pace in 31 months and slipping closer to stagnation amid an increased rate of decline in worldwide export volumes. However, the service sector likewise reported a weaker rate of expansion, showing the smallest gain since September 2016 as the slowdown broadened out and uncertainty spiked higher. 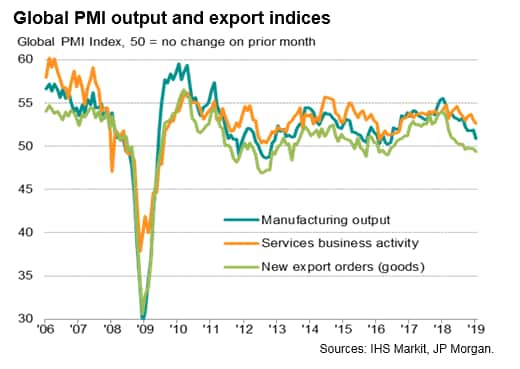 Other indicators added to the gloomier picture. New orders expanded at the slowest rate since July 2016 and a second successive marginal decline in backlogs of work hinted at the development of spare capacity.

Job creation hit a 21-month low as hiring slowed in response to the weakened order book trend and darkened prospects. Optimism towards the year ahead regained some ground from December's two-and-a-half year low, but remained subdued by recent standards and well below levels seen this time last year. 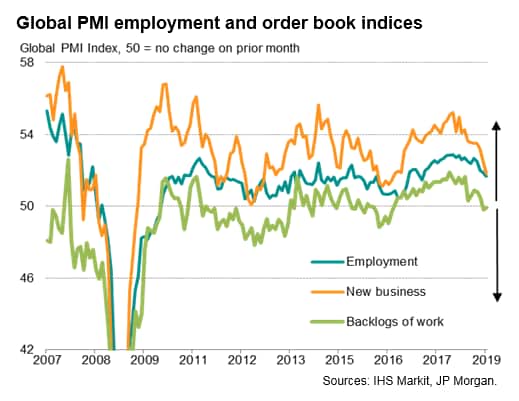 US and India buck slowdown trend

Composite PMIs (covering manufacturing and services) indicated that growth slowed in all major developed and emerging economies with the exceptions of the US and India, both of which saw growth hold steady on rates seen in December on the back of faster manufacturing expansions.

The US continued to lead the developed world expansion, the gap widening with other major economies as faster manufacturing growth accompanied a steady improvement in the service sector, both primarily reflecting solid domestic demand.

Despite the US showing resilience in January, with growth holding steady on the robust pace seen in December, developed world growth slipped to a 28-month low reflecting weakened trends elsewhere. 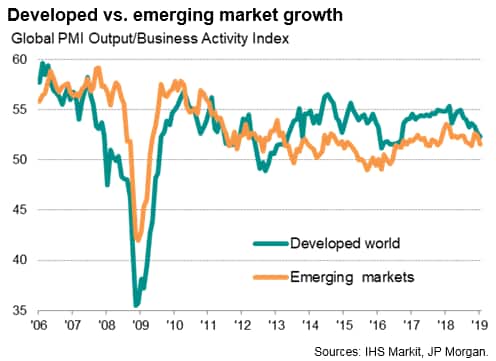 The UK reported a near-stalling of growth as Brexit worries intensified, with the composite PMI dropping to its lowest since 2012 with the sole exception of July 2016, when business faltered in the immediate aftermath of the EU referendum in mid-2016.

Eurozone businesses also reported only modest growth, with the composite PMI down to its lowest since July 2013. The surveys hint at downturns in both Italy and France as well as much weakened growth in Germany, often linked to rising political uncertainty.

The divergence between the US and Europe consequently widened, with the January PMIs indicating annualized growth of approximately 2.5% in the US compared to stagnation in the UK and just 0.4-0.5% in the eurozone (0.1% quarterly)

Growth also faltered in Japan, with the PMI sliding to the second-lowest level since the current upturn began in late-2016, as manufacturing moved into contraction for the first time for over two years. The disappointing survey data therefore hint at the Japanese economy also growing only very modestly in the first quarter. 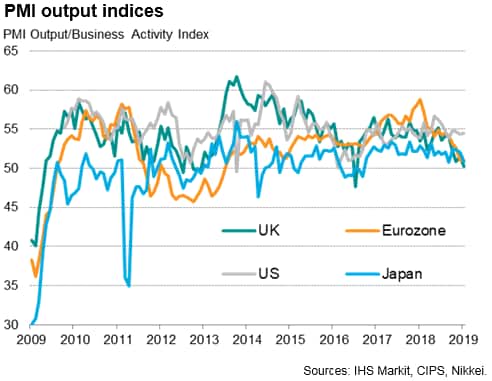 Emerging market growth meanwhile faltered to one of the weakest seen over the past year-and-a-half, mainly due to a slowdown in China. The Caixin PMI composite output index, compiled by IHS Markit, dropped from 52.2 in December to 50.9 in January, its second-lowest since mid-2016. A weakened manufacturing performance led the slowdown, though service sector growth proved far more resilient. Encouragingly, the survey recorded a slight upturn in exports for the first time in ten months and expectations of future growth also ticked higher.

Meanwhile, only marginal slowdowns were seen in Brazil and Russia, with both enjoying relatively solid growth by recent standards. India was consequently the only major emerging market not to see growth weaken compared with December, thereby sustaining one of its best growth spells for several years.