The pace of global economic growth picked up again in March from a two-and-a-half year low seen at the start of the year, but remained among the weakest since 2016. Business sentiment meanwhile sank lower, casting doubt over whether the current increase in growth momentum can be sustained.

While service sector growth accelerated, manufacturing almost stalled, led by the steepest downturn in the developed world since 2012. The emerging market PMI consequently rose above that of the developed word for the first time in six years.

The US continued to drive the global expansion, accompanied by faster growth of business activity in China, Brazil and Russia. Growth meanwhile slowed in the eurozone, Japan and India, while the UK stalled amid heightened Brexit anxiety. 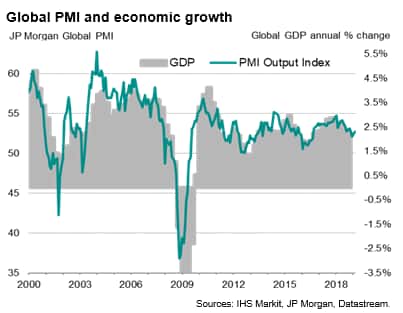 At 52.8 in March compared to 52.6 in February, the JPMorgan Global PMI, compiled by IHS Markit, rose for a second successive month to signal the strongest expansion of global output since November.

While failing to prevent the PMI from signaling the weakest calendar quarter since the third quarter of 2016, the improved March reading suggests the global economy has regained some upward momentum after the 28-month low seen in January.

The first quarter average PMI reading is indicative of worldwide GDP rising at an annual pace of just over 2% (at market prices).

Further improvements in coming months are by no means assured, however, as business optimism about the year ahead slipped lower, dropping to the joint-lowest since June 2016. The current level of business confidence is now one of the lowest seen since comparable data were first available in 2012.

Furthermore, although rising at an increased pace in March, inflows of new business continued to run at one of the slowest rates seen for two and a half years, contributing to a stagnation of backlogs of work and leading to a slowdown in the overall pace of hiring. 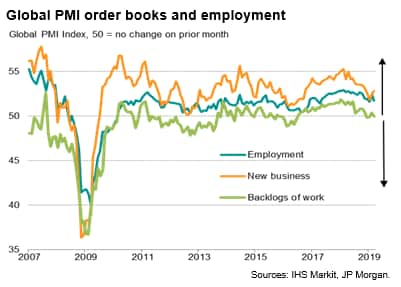 The weakness of global trade remained a key drag on demand growth and an area of additional concern for the outlook. Worldwide exports of goods and services fell for a fourth straight month, with the rate of decline the steepest since May 2016, led by an increased loss of goods exports.

The survey data also revealed a widening of growth trends by sector, with the global economy increasingly reliant on services to sustain expansion. Manufacturing output growth slowed further, almost stalling to exhibit the smallest increase since June 2016. In contrast, service sector growth accelerated to the joint-fastest in eight months. The resulting gap between the two sectors was the widest since August 2015 and among the biggest seen over the past decade. 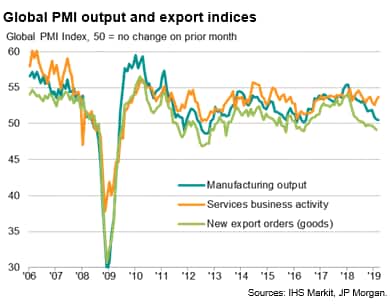 Dig deeper into the results and the divergence between manufacturing and services is most pronounced in the developed world.

Developed world manufacturing slipped into decline in March, registering the steepest fall since November 2012, whereas the service sector continued to enjoy relatively robust growth. The gap in performance between the two sectors was the widest since April 2009. The weakening manufacturing trend led the overall pace of developed world growth down to the slowest since September 2016.

In the emerging markets, the service sector likewise was the main driver for expansion, with output growing at the fastest rate for three months, but - in contrast to the developed world - manufacturing output growth also accelerated, reaching the fastest since last August.

Overall emerging market growth consequently hit the fastest since February of last year, pushing the headline PMI above that of the developed world for the first time in six years. 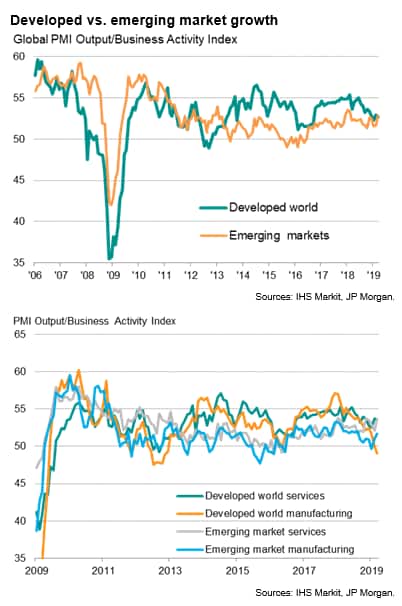 The United States continued to lead the developed world expansion after another solid service sector performance helped offset a deteriorating trend in manufacturing. For the first quarter as a whole, the surveys are consistent with the US economy growing at an annualised rate of approximately 2.5%. However, inflows of new work have moderated markedly compared to this time last year as manufacturing weakness and growing concerns about the economic outlook have increasingly spread to the service sector. Business optimism about the year ahead has also slipped to the lowest for two and a half years, posing downside risks to growth in coming months.

The eurozone PMI indicated a sluggish end to the first quarter, with business growth ebbing to one of the most lethargic rates seen since 2014. At current levels, the PMI remains consistent with GDP rising by 0.2% in the first quarter. The slowdown was led by a deepening downturn in manufacturing, where output fell at the sharpest rate for almost six years. The service sector has managed to sustain a relatively resilient rate of growth but has also lost momentum in recent months. 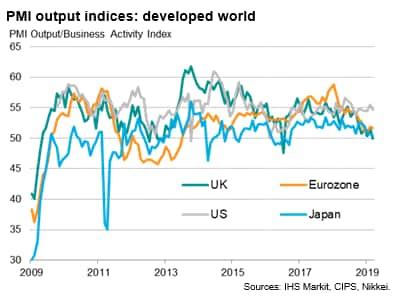 Even worse performances were seen in the UK and Japan.

In Japan, the Nikkei PMI surveys indicated only marginal growth, with March's headline reading the lowest since September 2016 and consistent with the Japanese economy growing at an annual rate of less than 1%. A deteriorating export picture contributed to the Japanese manufacturing economy suffering its worst decline in production for 34 months during March, though growth in the service sector remained well above its long-run average.

Disappointing PMI surveys, including a renewed downturn in the service sector, meanwhile indicated that the UK economy contracted in March, stalling over the first quarter as a whole despite signs of a pre-Brexit boost via record stock-piling. A worsening trend of new orders added to the risk of the UK sliding into a deepening downturn in coming months amid Brexit-related uncertainty.

Emerging market growth was given a big boost from China, with the Caixin PMI surveys indicating the fastest rate of economic growth for nine months during March, hinting that recent fiscal support measures are beginning to work.

Growth meanwhile also accelerated in Brazil and Russia on the back of robust expansions in both services and manufacturing, the latter gaining momentum in both cases. Brazil's resulting expansion was notable in being the sharpest since January 2013.

In contrast, India saw growth moderate to its weakest since September. However, the rate of expansion remained robust by recent standards, especially in manufacturing, rounding off a full-house of solid expansion in all four largest emerging markets. 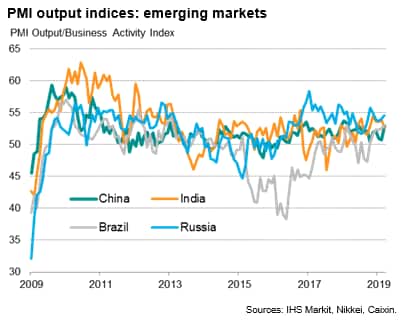