Worldwide growth accelerated for a second successive month in December, according to the latest PMI surveys, registering the strongest monthly increase in output since last April. Other indicators such as jobs growth, new order inflows and business expectations also improved, to underscore the brightening picture of global economic trends at the end of 2019.

The JPMorgan Global PMI™ (compiled by IHS Markit) climbed from 51.4 in November to an eight-month high of 51.7 in December, recovering further since slumping in October to its lowest since February 2016. The latest reading nevertheless remains comparable with global GDP rising at a modest annual rate of just less than 2% (at market prices), below the average of 2.4% seen since 2009.

New business inflows also picked up, rising at the fastest rate since July, to indicate that output growth is likely to accelerate further at the start of the New Year. Similarly, future output expectations hit the highest since June, reflecting more upbeat prospects for the year ahead.

Encouragingly, companies matched the improved outlook and upturn in current order book growth by taking on more staff at a rate not seen since July.

The increase in employment meant backlogs of work continued to fall, however, hinting that further jobs growth will only be sustainable if demand rises at an increased rate. In this respect, a further fall in global exports of goods and services underscored how weakened trade flows continued to act as a drag on demand. However, December's fall in global exports was the least marked since last April, suggesting some of the trade drag has eased. 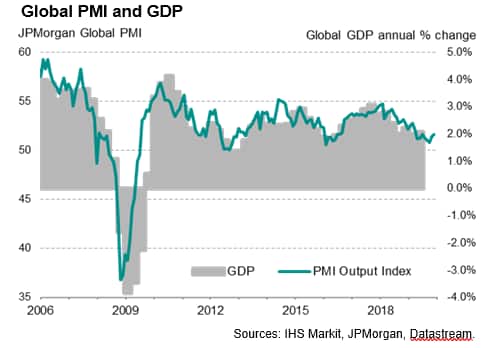 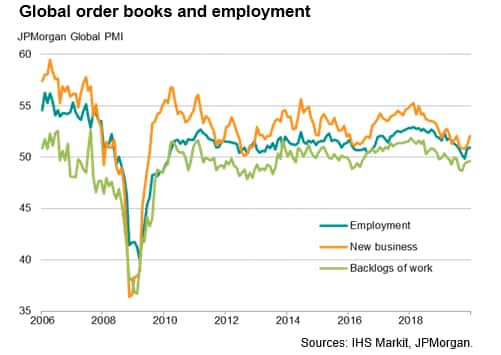 An ongoing trade drag was most evident again in the manufacturing sector, where exports fell for a sixteenth successive month, leading to only modest gains in both output and new orders. These mild upturns nevertheless added to indications that the global goods-producing sector has stabilised after a mid-year decline.

Services meanwhile ended the year on a stronger note, with activity growing at the sharpest rate since July, having accelerated for a second month running in December. Inflows of new business in the service sector also rose to an extent not seen since July, in part thanks to the first rise (albeit only marginal) in exports since July.

Output in both sectors nevertheless continued to grow at rates below those seen a year ago. Likewise, although sentiment about the year ahead improved in both sectors from lows seen in August and September, confidence remained much weaker than a year ago in both cases.

The relatively subdued degree of confidence contributed to a further net loss in manufacturing jobs, and a rate of growth of service sector employment that remained well below that seen earlier in the year. 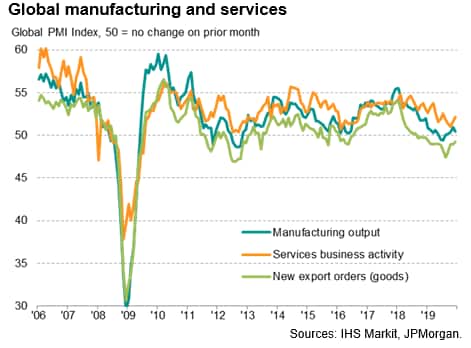 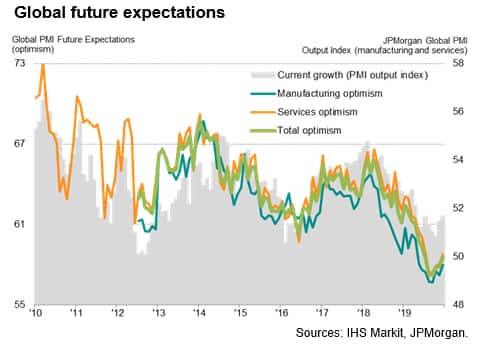 The upturn in growth and demand has been accompanied by a firming of price pressures, with average input costs across manufacturing and services rising in December at a rate not seen since July. Average prices for goods and services meanwhile increased at the fastest pace since June. Companies reported the need to pass on higher commodity prices, with pricing power often improved as a result of stronger client demand. 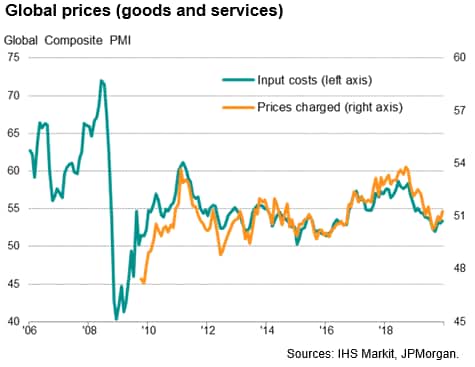 Developed world growth remained especially sluggish relative to emerging markets. However, while growth in the former perked up to the fastest since July, the latter saw the rate of expansion weaken slightly from November's eight-month high, therefore closing the gap between the two markets. The emerging market composite PMI has nonetheless now exceeded that of the developed world for five successive months, contrasting with the underperformance seen throughout much of the prior five-year period. The resulting PMI figures remained commensurate with developed world annual GDP growth of approximately 1% compared to around 5% in the emerging markets.

Looking at the major developed markets, growth was led by the United States, where the rate of expansion climbed to an eight-month high, albeit remaining consistent with annualised GDP growth of approximately 1.5% in the fourth quarter (and 1.8% in December alone). Eurozone growth also accelerated slightly though remained lacklustre and among the weakest seen since early 2013, commensurate with GDP struggling to expand by more than 0.1%.

In contrast, the composite PMI data for the UK and Japan signalled contractions. Output fell for the third month running in Japan and for the third time in the past four months in the United Kingdom. While the UK is indicative of GDP more or less stagnating in the fourth quarter, as Brexit uncertainty was compounded by jitters ahead of December's general election, the PMI for Japan points to a steeper fall; a quarterly decline of a magnitude not seen for three years, reflecting business being hit by the October sales tax hike. 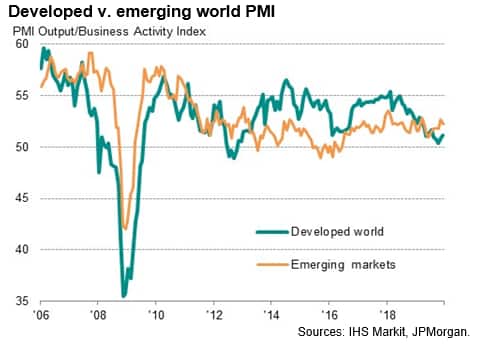 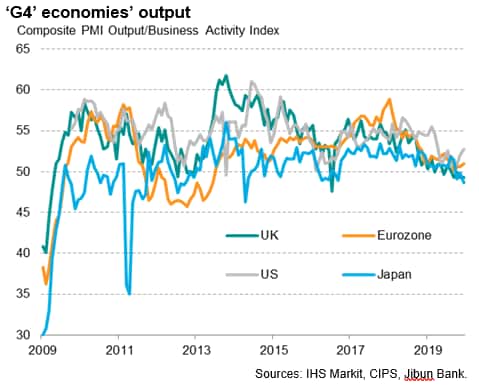 All four major emerging markets meanwhile remained in expansionary territory according to their composite PMI readings, led by India, which recorded the sharpest expansion of business activity since July. Growth slowed in China, Russia and Brazil, though in all cases remained well above the lows seen around mid-year.

While both India and China saw solid growth of both manufacturing and service sector activity in December, Russia's expansion was fuelled solely by the service sector, and Brazil's growth remained especially modest, limited by subdued expansions in both sectors. 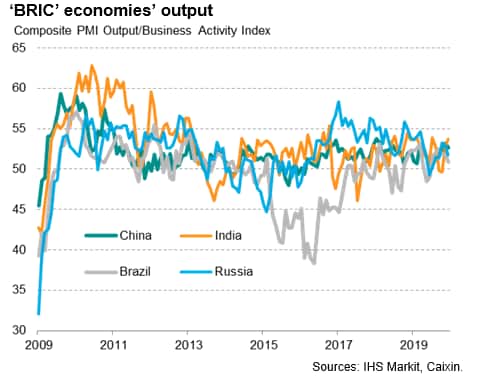