The pace of global economic growth picked up in February from a near two-and-a-half year low seen at the start of the year, but remained among the weakest since 2016 amid a trade-led slowdown and especially weak growth in Europe and China.

Some brighter news was seen in February as the JPMorgan Global PMI, compiled by IHS Markit, rose from a 28-month low of 52.1 in January to 52.6. Although signalling the first acceleration of growth for three months, the latest reading was still the second-weakest since September 2016. 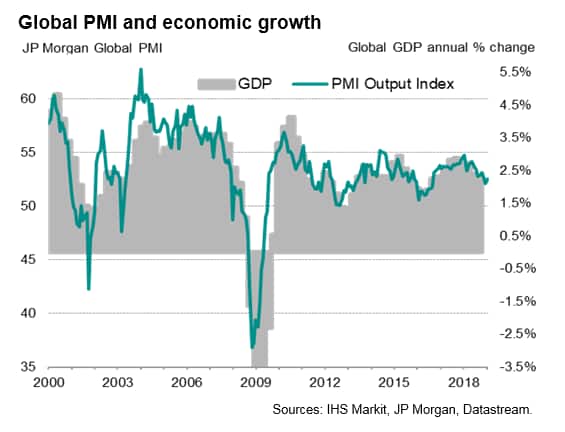 The PMI exhibits a strong correlation with global GDP and, at these levels, historical comparisons suggest the global economy could struggle to expand at a rate in excess of 2.0% in the first quarter (measured at market prices), down from an estimated 2.3% in the fourth quarter and a peak of 2.9% at the end of 2017.

Growth of employment and new orders also ticked higher, though in all cases remained well below peaks seen last year. Having stagnated in January, backlogs of work rose in February but remained indicative of capacity constraints having eased in recent months. 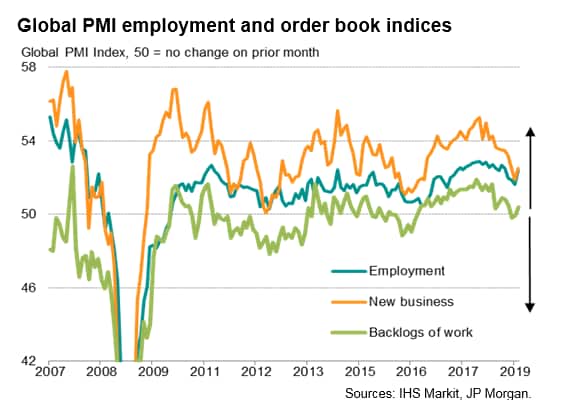 The slowdown was led by a further near-stagnation of manufacturing output, the marginal increase of which was the weakest seen since June 2016. The manufacturing sector's malaise was in turn largely attributable to a further downturn in global trade, with worldwide exports falling for a sixth straight month, dropping at the steepest rate since May 2016. Some 13 of the 30 countries surveyed by IHS Markit now have manufacturing PMIs below the 50 'no change' level, up from just two this time last year.

In contrast, service sector growth perked up to a three-month high, offsetting the manufacturing slowdown. The upturn was buoyed by faster inflows of new business, suggesting domestic market demand remains encouragingly robust in many key economies. 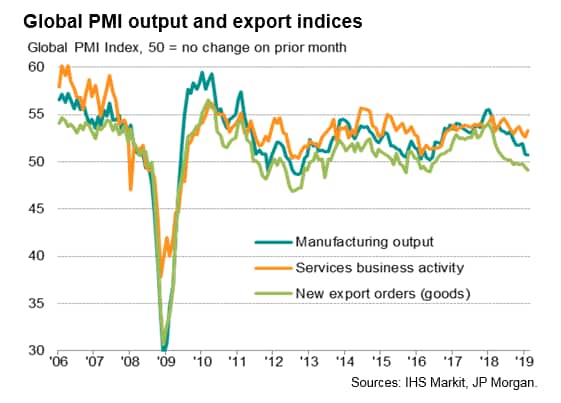 While developed world growth accelerated to a three-month high, emerging markets saw the pace of expansion hold steady on that seen in January. However, in both cases growth rates are among the lowest seen since 2016, with manufacturing close to stalling in both instances. 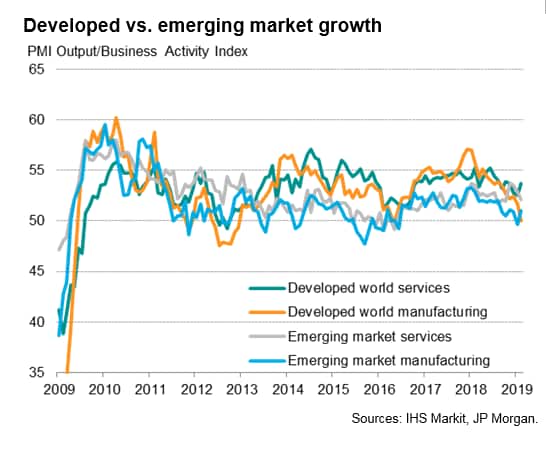 The US continued to lead the expansion, with the composite PMI outperforming both the global and developed world PMIs to the greatest extents since early-2015. However, the surveys revealed a growing dichotomy in the US, with manufacturing weakening while service sector growth accelerated, suggesting the first quarter is on course to see a similar expansion to the 2.6% GDP growth recorded in the fourth quarter of last year.

Growth in Europe meanwhile remained subdued. The Eurozone PMI strengthened to a three-month high amid signs of one-off dampening factors easing (such as the 'yellow vest' protests in France and the auto sector emissions rule change), but even at these levels the PMI indicates quarterly GDP growth merely picking up to 0.2% in February from 0.1% in January. The first quarter could therefore see the economy struggle to beat the 0.2% expansion recorded in the fourth quarter.

Similarly in the UK, the PMI remains consistent with just 0.1% GDP growth as Brexit uncertainty exacerbated a wider slowdown. Worryingly, even this modest performance reflected a boost to some sectors from pre-Brexit preparations. Customers sought to buy goods or complete projects ahead of Brexit day on 29th March and manufacturers built up stock piles to an extent not seen in the survey's 27-year history.

Slower growth was also seen in Japan, where the Nikkei composite PMI fell to its lowest since September 2016. Although service sector growth perked up to the best since November, manufacturing output fell at the steepest rate since May 2016 amid a further marked rate of decline in export orders. 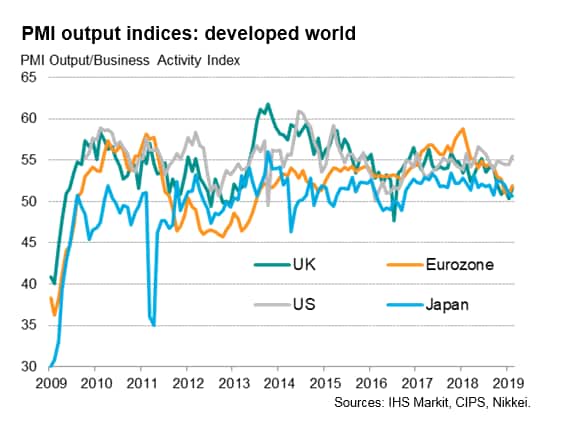 The failure of emerging market growth to pull higher than the near-one-and-a-half year low seen in January reflected a weakened rate of expansion in China which slipped to the second-lowest since June 2016.

The Caixin PMI surveys showed service sector growth cooling to one of the weakest seen in the near 14-year history of the survey though manufacturing stabilized after suffering the first fall in output for two-and-a-half years at the start of the year.

In contrast, the Nikkei PMIs for India showed the pace of economic growth strengthening in February to the second-fastest since last July. The acceleration was driven by a thriving manufacturing sector, where production growth hit a 14-month high. Notably, manufacturing new export orders rose solidly, meaning the Indian goods-producing sector outperformed those in Brazil, Russia and China by a considerable margin. The service sector meanwhile also saw faster increases in new work and business activity.

Brazil's upturn also gained further momentum, with the composite PMI reaching its second-highest in six years. Improved growth rates were seen in both manufacturing and services, the latter enjoying a particularly marked turnaround from the steep downturn recorded in the middle of last year, though still lagging behind the manufacturing sector. Domestic demand was the main driver of Brazil's expansion.

However, of the four largest emerging markets, Russia recorded the fastest rate of expansion, with growth accelerating to a three-month high on the back of improved performances in both manufacturing and services. 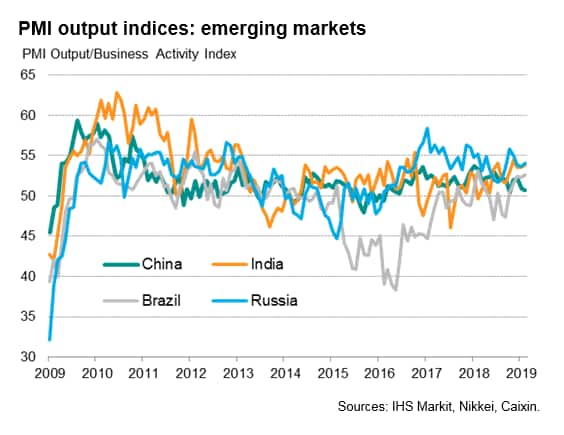