Worldwide growth picked up in November, led by the fastest manufacturing expansion seen so far this year. Key sectors such as autos and machinery equipment makers showed promising signs of return to growth, while service sector growth also perked up. However, the overall worldwide pace of expansion remained one of the weakest seen in recent years, largely due to a sustained fall in global trade, with especially subdued trends recorded in developed world markets. 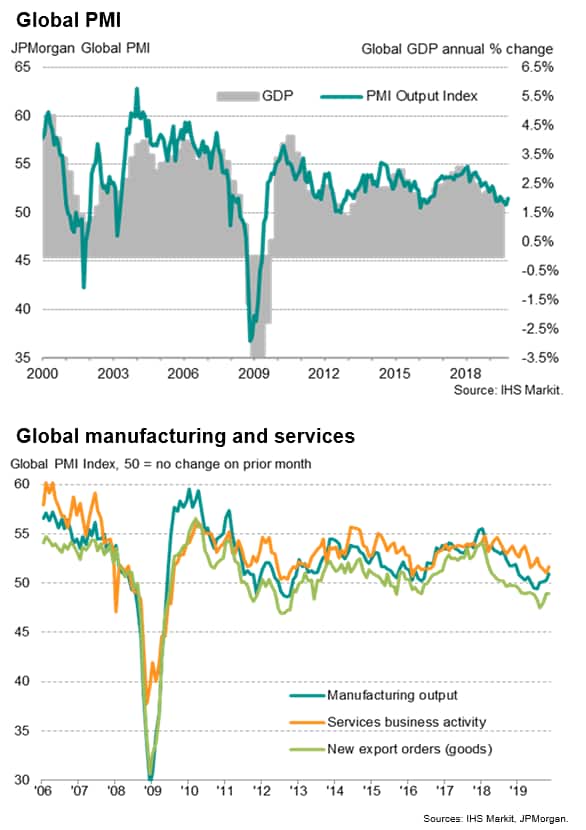 At 51.5 in November, the JPMorgan Global PMI™ (compiled by IHS Markit) rose to a four-month high, recovering some poise after slumping in October to its lowest since February 2016. The latest reading nevertheless remains one of the lowest recorded over the past four years, comparable with global GDP rising at an annual rate of just below 2% (at market prices), meaning fourth quarter growth is likely to be among the weakest seen over the past decade.

Manufacturing showed further tentative signs of improvement, with the global factory output index rising for a fourth month in a row to reach the highest so far this year, accompanied by the first acceleration in service sector growth for four months. Both sectors nevertheless continued to grow at some of the weakest rates since early-2016, in part reflecting subdued global trade.

Global goods trade, which led the economic slowdown in 2018, continued to deteriorate at an historically marked rate, acting as a drag on growth. Global service sector exports likewise fell. That said, overall global growth of new orders showed the largest gain for four months, hinting at improved domestic demand in some of the world's key markets. 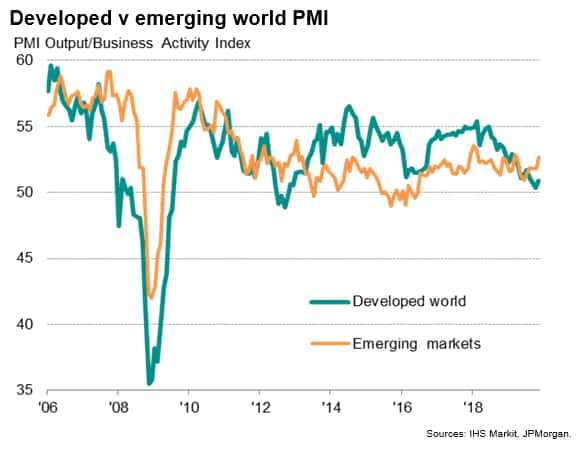 Developed world growth remained especially sluggish in November. Although improving to a three-month high, output growth continued to run at one of the lowest rates seen since 2012, commensurate with an annual GDP growth of approximately 1% in the developed world economy.

Both Japan and the UK saw sub-50 composite PMIs, indicating mild contractions in business activity, while the Eurozone PMI remained close to stall speed. Of the 'G4' economies, only the US saw strengthening growth, though even here the rate of expansion remained well below that seen earlier in the year.

Compared with official data, the UK and Japanese PMI surveys are commensurate with GDP stagnating at best in the fourth quarter, while the eurozone PMI is indicative of a modest 0.4% annualised increase. The US PMI from IHS Markit is meanwhile signalling annualised growth of approximately 1.5% in the fourth quarter so far, leading a rather lacklustre group of rich world economies. 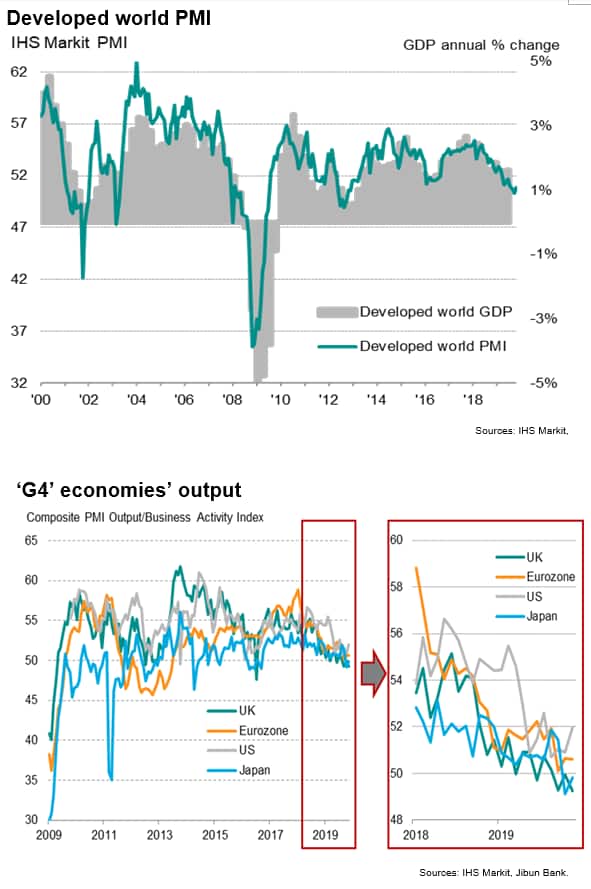 Emerging market growth meanwhile hit an eight-month high, gaining further traction from the three-year low seen back in June. A strengthening pace of expansion in China was accompanied by a return to growth for the first time in three months in India, while robust growth (by recent standards) was also recorded in Brazil and Russia.

The Caixin PMI survey data for mainland China in fact indicated the strongest monthly expansion of business activity since February 2018. However, whether the upturn represents the start of an improving trend for China looks unlikely. Firms' own expectations of output in the year ahead slipped lower in November, down to one of the gloomiest recorded in the history of the China PMI surveys. Manufacturers remained especially downbeat. 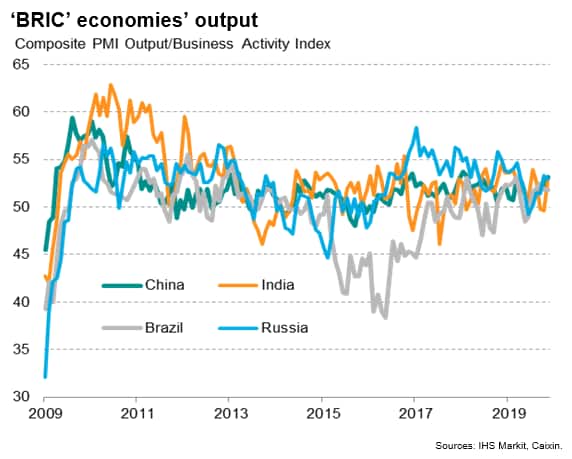 Delving deeper into IHS Markit's detailed sector PMI data for November, the latest numbers showed output rising in 19 of the 26 sectors, up from 15 in October. The expansion was led by banking services, food and drink, while 'primary' industries such as general industrials and metals & mining continued to lag behind.

However, two key sectors, autos and machinery equipment, that have been in steep downturns returned to growth.

First, output of the global autos and parts sector rose for the first time since September 2018, driven by the first (albeit marginal) rise in new orders for over a year. Although only very minor, the improvement is significant in tentatively marking an end to the car sector's steep downturn for much of the year, which in turn hit economies such as Germany and its supply chains in other countries especially hard. The output index for the global autos sector has now risen for four successive months, climbing over five points from its July low.

Second, the machinery and equipment manufacturing sector saw the first increase in output since December 2018. The respective index now have risen for five straight months, with order books deteriorating at the slowest rate for a year. The machinery and equipment sector is a key bellwether of business investment in fixed assets, and hence the recent improvement hints at growing risk appetite among companies worldwide for investing in new machinery and expanding capacity. 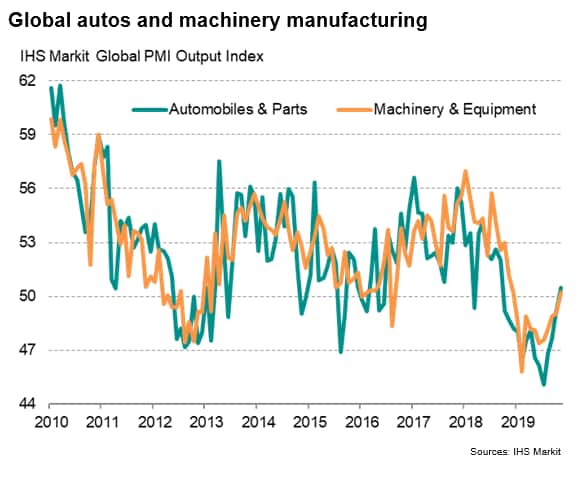 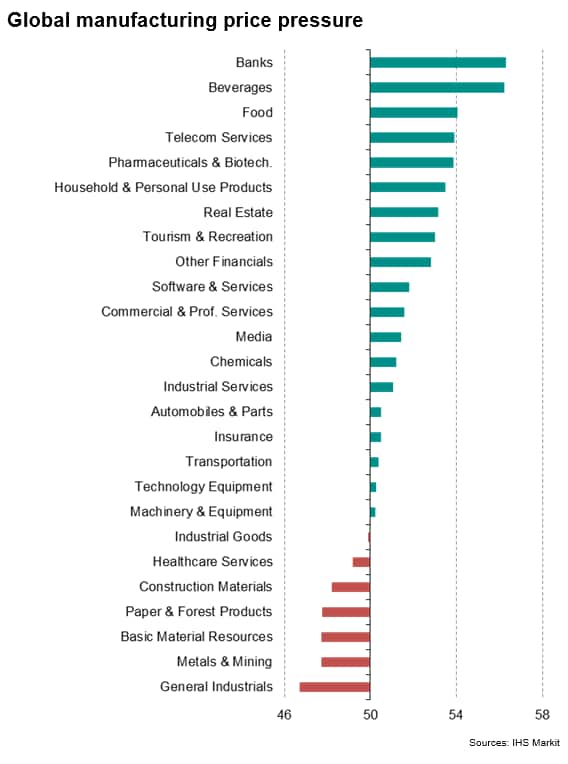 Insights into whether these encouraging signals feed through to further improvements in global economic growth will be provided by the flash PMI surveys for the US, Eurozone, Japan, UK and Australia on 16th December.