Heavy users of copper saw a solid decline in output in January, boding ill for future demand for the metal in coming months. The Global Copper Users PMI Output Index hit a near ten-year low at the start of 2019, indicating a downturn of the scale not seen since the financial crisis.

This gives worrying indications of the health of the manufacturing sector and suggests a marked weakening of demand for copper from manufacturers in the months ahead, as well as providing a potential early warning signal for slower global economic growth.

The IHS Markit Global Copper Users PMITM is a composite indicator giving an overview of operating conditions at manufacturers identified as heavy users of copper and is based on data provided by companies around the globe.

As many copper users are producers of primary manufacturing goods, the index measuring output levels has a strong correlation with worldwide manufacturing output, and can offer projections for global economic growth in the near-to-medium term.

Falling output paints gloomy picture for first half of 2019

The Global Copper Users Output Index posted at 46.8 in January, indicating a solid decline in production at heavy users of copper. This was the lowest reading since April 2009, shortly after the global recession. A key factor was notably softer output growth at US copper users, though users in Asia and Europe continued to see declining production levels. 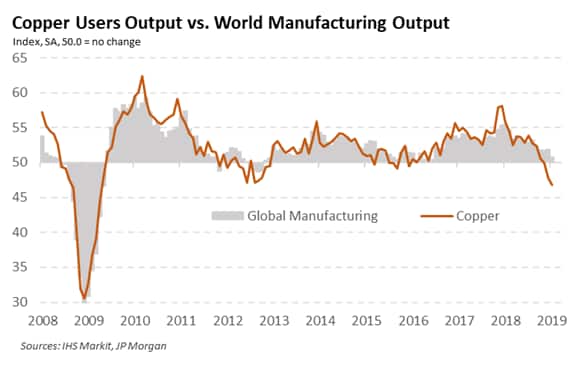 The latest data suggest a possible fall in the wider gauge of manufacturing output in coming months. A comparable, albeit slightly softer contraction in production at copper users in 2012 initiated a four-month sequence of deterioration in output recorded by the JPMorgan Global Manufacturing PMI.

Moreover, as a forward indicator to world GDP growth, January's copper users data point to a marked slowdown in the first half of 2019. Copper is used in a variety of sectors, including electronics, transport and construction. A downturn in these areas can lead to a notable rippling effect across the global economy. 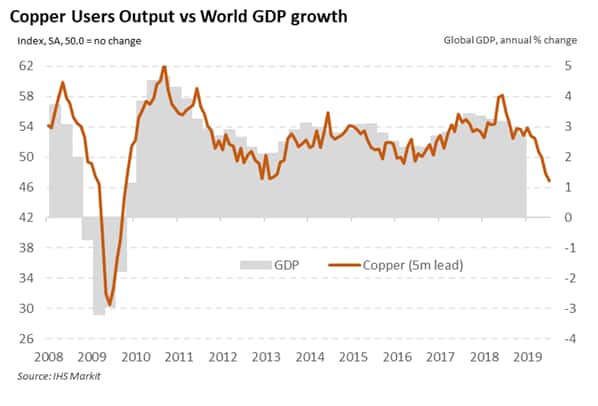 A strong recurring influence on falling output is declining trade. Copper users have recorded falling new export orders in each of the last eight months, commencing shortly after the US placed tariffs on Chinese copper goods. Notably though, January was the first month in this period where US and European users joined Asian users in reporting falling export sales.

Currently, further tariff hikes have been postponed amid fresh US-China trade talks. If these are successful, they may allow a rebound in output. On the other hand, if talks are unsuccessful, US import tariffs will likely rise from 10% to 25%. In which case, copper - and other metals - users may face even gloomier business conditions in the months ahead.

Weaker new orders may also exert downward pressure on copper prices. The forward-looking New Order: Inventory Ratio has fallen markedly over recent survey periods, as stockpiles have not contracted as quickly as demand, most likely reflecting stock building ahead of future tariff hikes. This is likely to act as a drag on copper prices in the near term as producers use up their stocks. While offering relief to copper users' balance sheets, such a decline may add further tensions for the whole industry. 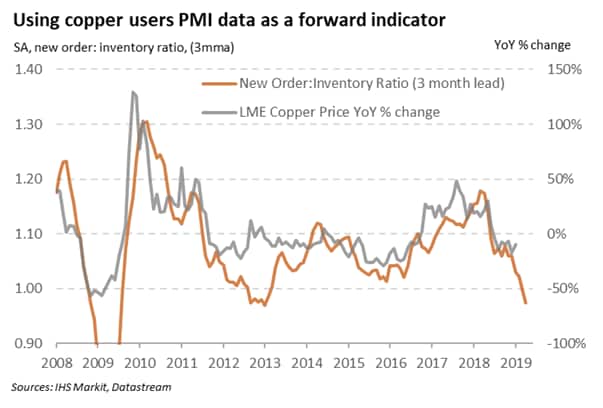 Our latest #PMI research into the relative performance of cities around the world showed a sustained underperforman… https://t.co/6SBE3xBCRf