While the global manufacturing sector has stalled in 2019 so far, a revival of optimism in the copper-using industry could fuel a wider improvement during the final quarter. Countermeasures to US tariffs have contributed to a rebound at Asian manufacturers using the metal meaning that, although demand pressures remain weak and still point to falling copper prices, there is a chance of some relief to the current slowdown.

The IHS Markit Global Copper Users PMITM is a composite indicator giving an overview of operating conditions at specific manufacturers identified as heavy users of copper. It is based on data provided by companies around the globe. As many copper users are producers of primary manufacturing goods, the index measuring output levels can also provide an indication of the direction of global manufacturing output.

The Global Copper Users PMI rose above 50.0 during September, indicating the first improvement in business conditions since November 2018. Key to the upturn was a moderate expansion in output, the fastest for a year, as firms looked to build stocks of manufactured goods in hopes of stronger future demand levels.

On a regional basis, Asian copper users have seen the greatest change in the trend for output this year. Production in the second half of 2018 was mired by the introduction of US tariffs on Chinese goods, causing a downturn in new orders and subsequent cut-backs to output across the region. China responded with fiscal stimulus measures to ease tax burdens on manufacturers, which helped to soften the decline and, more recently, lift production levels. 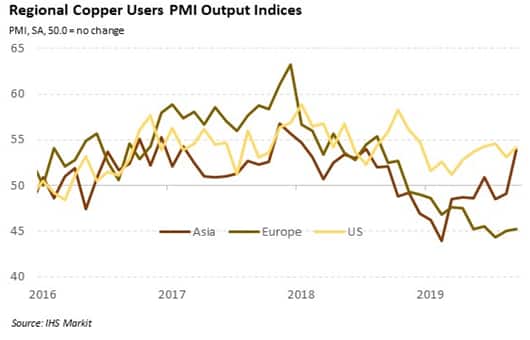 As Asia accounts for a large proportion of the global copper-using industry, this has had a notable impact on global output levels and could signal a boost for the world manufacturing sector. Historically, the Global Copper Users PMI Output Index has correlated strongly with the Global Manufacturing PMI Output Index, so the latest upturn in copper use offers some optimism that this could transform into higher output in other industrial sectors. That said, caution is needed, as Asia copper PMI data have shown greater volatility in recent times, particularly as Asian operating conditions have diverged from those seen in European and US markets. 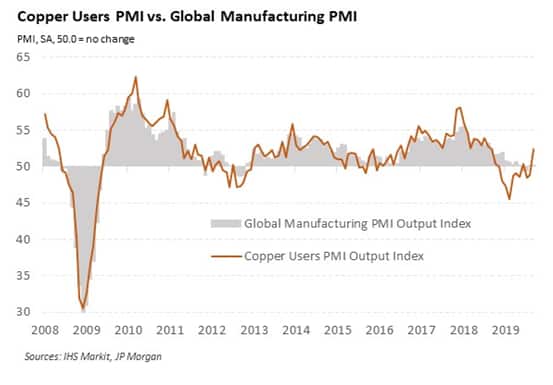 Despite the overall improvement among copper users, the impact on prices is likely to remain subdued. The rise in new orders at Asian users in September was only marginal, while demand across the global copper-using industry declined as a result of weak conditions in European markets. Stronger output growth has therefore left manufacturers over-stocked, signalling that input buying may weaken during the fourth quarter unless demand levels improve. The new order-to-inventory ratio (derived from the Copper Users PMI data) suggests a downwards impact on prices, with the year-on-year change remaining negative. 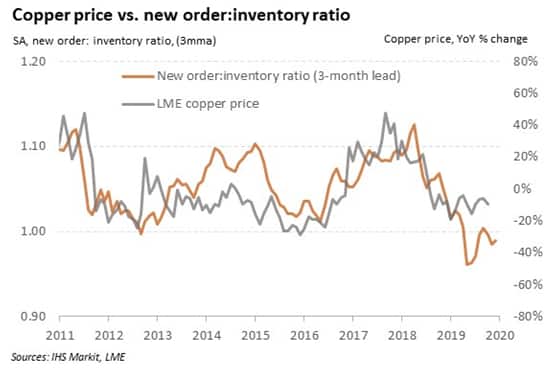 In addition, copper remains in good supply, despite reports of a 2% fall in global mining production in 2019. Weak manufacturing demand has meant that shortages are low, indicating that there is unlikely to be a supply-side squeeze in the near term. There are some positive factors that may help support copper prices. For instance, China has announced additional stimulus measures for its domestic economy, which may boost manufacturing demand during the fourth quarter. Also, there have been further trade talks between the US and China, although sentiment toward these discussions has been mixed. The trade war remains the number one issue affecting the global industrial sector, so any progress could lead to upward pressure on copper prices.

Either way, the underlying PMI picture has become more positive, suggesting a possible rebound in the Asian copper-using industry, albeit one that is likely to leave prices subdued for now. Upcoming data releases will confirm whether higher output levels can be maintained, or whether demand stagnates again.

The next Copper Users PMI data will be released Friday 8th November.

Global Composite PMI falls to 39.4 in March amid the COVID-19 pandemic, the lowest in over 11 years, with global GD… https://t.co/OVYuRWfXPb

UK Composite Output PMI ⬇️ to 36.0 in March, led by a slump in services activity as shops were closed to slow the C… https://t.co/eOkj8FRKS0