Global business activity contracted in March at the fastest rate for 11 years as measures to contain the coronavirus disease 2019 (COVID-19) pandemic took an increasing toll on economies around the world.

The JPMorgan Global PMI™ (compiled by IHS Markit) fell by a new record 6.7 points in March, building on a prior record plunge of 6.1 points in February to drop from 46.1 to 39.4, its lowest since the height of the global financial crisis in February 2009. Only October 2001 (post 9/11) saw a biggest slide in the PMI than the declines witnessed in the last two months.

The latest reading indicates a second successive month of steeply declining business activity, comparable with global GDP falling at an annual rate of approximately 1.5-2.0% (at market prices), down dramatically from a rate of expansion of almost 3% signalled back in January.

The two consecutive record falls in the global PMI highlight the unprecedented economic impact of the coronavirus pandemic. The latest data were collected between 12th-27th March, encompassing a time when the virus spread further from its origin in China to other Asian countries, Europe and the Americas, leading more governments to introduce increasingly widespread and draconian measures to help prevent healthcare systems from being overwhelmed by the spread of the virus. Measures have so far included travel bans, closures of non-essential businesses and strict restrictions on movement by households, hitting global demand from both consumers and businesses for a wide variety of goods and services. 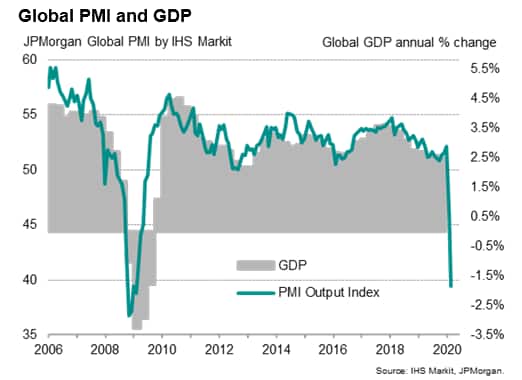 The steepest deterioration was seen in the services sector, where businesses such as airlines, restaurants, hotels, cinemas and other leisure activities were hit especially hard by coronavirus-fighting measures, though the overall hit to business was broad-based, affecting sectors such as business services and financial intermediation due to weakened demand and disruptions to normal working practices. The resulting March decline in global services activity was the largest ever recorded in the survey's 22-year history, therefore exceeding that seen even at the height of the global financial crisis.

Manufacturing output meanwhile also declined sharply as slumping demand, personnel shortages, supply constraints and, in many cases, forced closures of non-essential businesses all limited production capacity. The decline was less severe than seen in February, in part reflecting signs of output stabilising in China after a record slump in February, but was still among the steepest since April 2009 as factory output in the rest of the world fell at an increased rate. 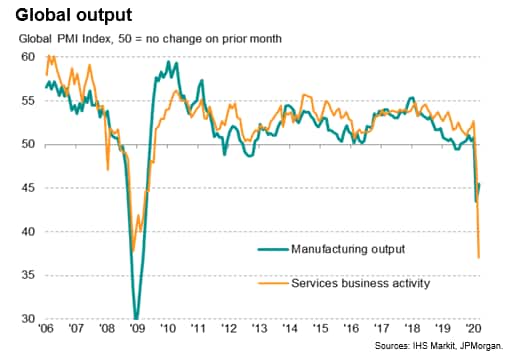 In addition to activity levels tumbling, order book indicators also sank sharply lower. Inflows of new business dropped sharply for a second consecutive month, declining at a rate not seen since March 2009, led by a record deterioration of new business into the service sector and the biggest drop in manufacturing new orders for 11 years.

Similarly, backlogs of uncompleted orders fell to a degree not seen since July 2009, hinting strongly that firms are running out of work to keep capacity fully utilised. The decline was broad-based but especially marked in the services economy.

Companies were quick to respond to the slide in demand by cutting workforce numbers, which fell for a second month in a row, dropping at the steepest rate snice July 2009. Equally marked reductions in headcounts were seen across both manufacturing and services. 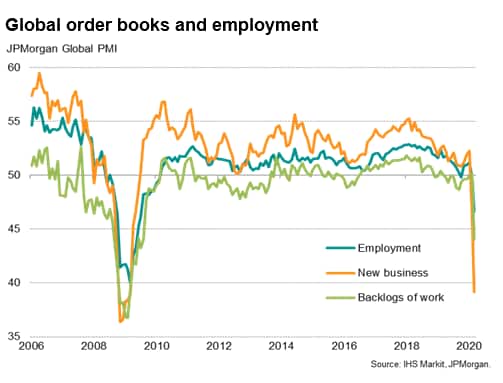 Average prices charged for goods and services meanwhile fell globally to an extent not seen since November 2009. Price cuts were commonly reported on the need to offer discounts in the face of sliding sales and dwindling revenues.

The ability to cut prices was facilitated by an easing in input cost inflation to the second lowest since 2009. Although shortages of some goods helped prop up prices, companies reported a marked cooling of input cost pressures due to lower prices for oil and other commodities, as well as reduced staff costs. 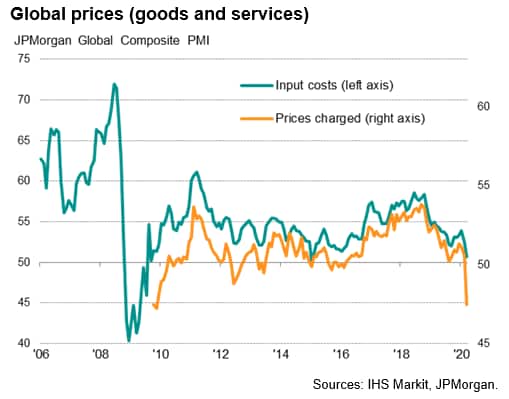 There was a divergence in cost pressures between the developed and emerging markets, however. While the former saw costs fall for the first time since 2009, the latter saw input cost inflation lift higher, linked in some cases to higher import prices resulting from the US dollar's strength. 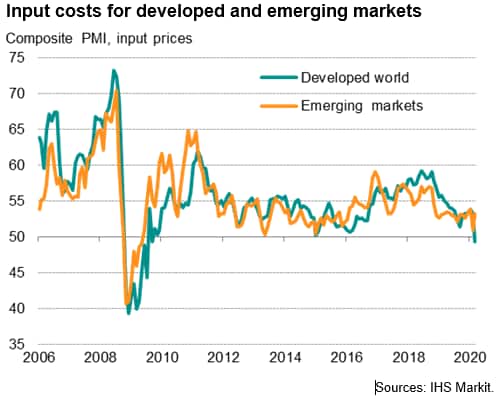 Having led the downturn in February with the biggest slide in output yet recorded by the Caixin survey (compiled by IHS Markit), China saw a marked easing in its rate of contraction across the manufacturing and service sectors as the composite PMI bounced from 27.5 in February to 46.7 in March. The sub-50 reading nevertheless meant output continued to decline at the second-steepest rate recorded since 2009. The downturn in new orders also gained pace to the second-steepest since 2009, led by falling demand for services.

China's slower rate of contraction helped ease the overall rate of decline of emerging market output to below that seen in the developed world, where companies reported the sharpest downturn since 2009. 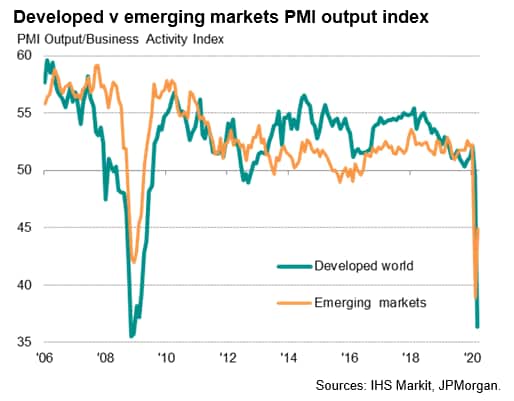 Looking at the major developed markets, having shown relatively greater resilience to the economic impact of the coronavirus in February, Europe saw especially steep contractions of business activity and demand in February, though downturns also deepened in both the US and Japan. 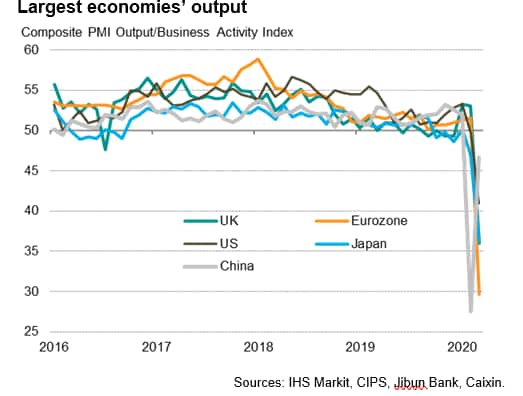 The United States saw the weakest downturn of the largest developed world economies, but the IHS Markit US PMI surveys still indicated that business activity slumped to the greatest extent since the height of the global financial crisis as efforts to contain the spread of the COVID-19 pandemic intensified. Manufacturing output fell at the fastest rate since 2009 but service sector activity fell to an even greater extent amid increasingly strict and widespread social distancing measures.

The survey is consistent with the US economy contracting an annualised rate approaching 5% in March, but with more measures to fight the virus outbreak being taken this decline will likely worsen in the second quarter. The survey also showed employment and prices charged for goods and services already being slashed at rates not seen since 2009 as companies seek to cut costs and discount aggressively in the face of collapsing revenues. 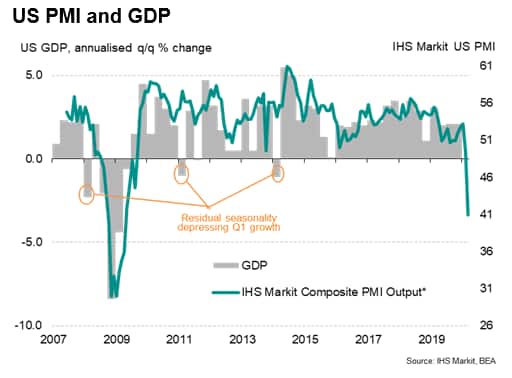 Japan and the UK saw similarly steep falls in output. In the UK, the surveys highlighted how the COVID-19 outbreak has already dealt the UK economy an initial blow even greater than that seen at the height of the global financial crisis. The composite PMI fell from 53.0 to an all-time low of 36.0, surpassing the prior low of 38.1 reached in late-2008.

Any growth in the UK was confined to small pockets of the economy such as food manufacturing, pharmaceuticals and healthcare. Demand elsewhere collapsed, both for goods and services, as increasing numbers of households and businesses at home and abroad close their doors. The service sector downturn was especially marked. 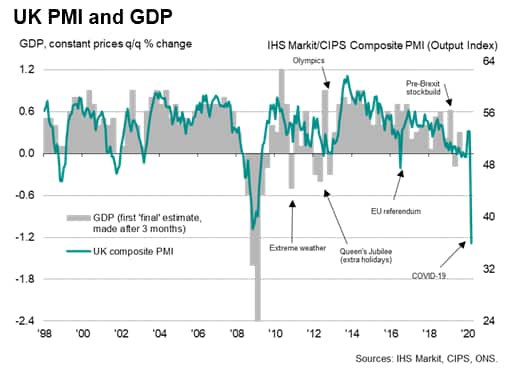 The UK survey is consistent with GDP falling at a quarterly rate of over 1.2% in March, a decline which is sufficiently large to have pushed the economy into a contraction of at least 0.3% in the first quarter. However, this decline looks set to merely represent the tip of the iceberg, and will likely be dwarfed by the potential contraction in the second quarter as further virus containment measures take their toll.

Business activity in Japan meanwhile contracted at the sharpest rate since 2009 with the exception of the tsunami and earthquake crisis in 2011. Both manufacturing and services recorded strong deteriorations, though the decline in the latter was particularly marked, pushing the au Jibun Bank composite PMI down to 36.2 from 47.0 in February. The data raise the likelihood that Japan's GDP contracted in the first quarter which, after the contraction seen late last year, means Japan is likely already in recession. 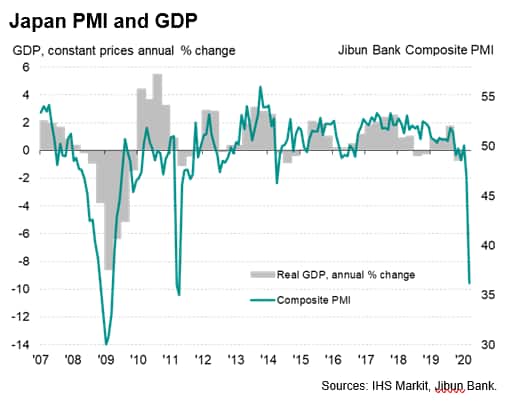 With various eurozone countries stepping up their measures to contain the spread of the coronavirus, it was no surprise to see the final PMI for March indicate the steepest collapse of business activity since data were first available in 1998, plunging from 51.6 to an all-time low of 29.7. The lowest prior value was 36.2, reached back in February 2009. The data indicate that the eurozone economy is already contracting at an annualised rate approaching 10%, with worse inevitably to come in the near future amid the intensifying virus-fighting measures currently being implemented.

The service sector reported an especially severe impact from the COVID-19 outbreak, contracting at the steepest rate in the survey's history with travel, tourism, restaurants and other leisure activities all hit especially hard by virus containment measures. 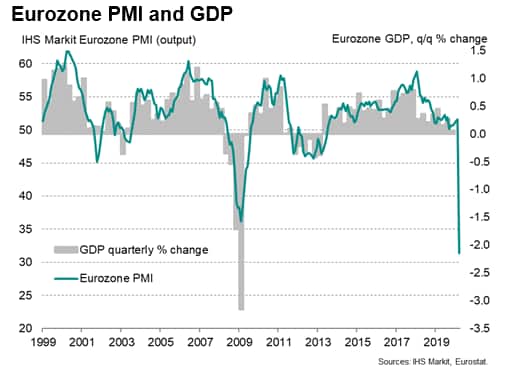 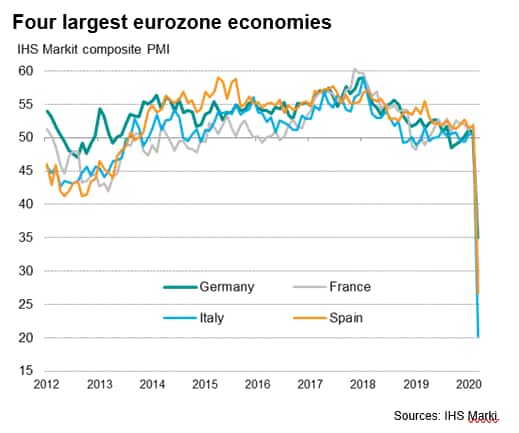 No eurozone countries escaped the severe downturn in business activity, with record low PMIs seen in Germany, France Italy and Spain. However, the especially steep decline in the service sector PMI in Italy to just 17.4 likely gives a taste of things to come for other countries as closures and lockdowns become more prevalent, and more strictly enforced, in coming months.