Global auto makers bucked a wider manufacturing growth trend in September, reporting a steep loss of production. Output fell at a rate not seen since May 2020, underperforming global manufacturing to a record extent.

The underperformance largely reflected supply delays, which rose to unprecedented levels in September, resulting in a marked shortfall of production relative to orders. However, while business expectations revived in the global auto sector, both supply chains and inflows of new orders - both of which deteriorated in September - will need to be closely watched for signs of whether this optimism will translate into higher production.

Global manufacturing output growth picked up in September from the 14-month low witnessed in August, according to IHS Markit's PMI surveys, but the improvement was by no means broad-based. Most notably, auto and parts makers reported a steepening production decline, recording the sharpest drop in output since May of last year.

Besides the downturn seen in the height of the initial pandemic outbreak last year, the latest decline in auto production was the steepest in the 12-year history of global sector PMI data availability. 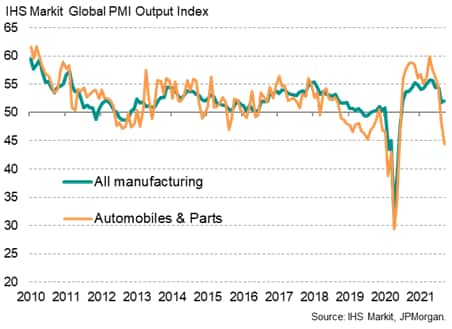 Moreover, of the 26 sectors covered by IHS Markit's global sector PMI, the auto sector downturn in September stands out as being the only major contraction of any sector. The only other sector to report a decline in business activity was insurance, where only a marginal decline was observed. 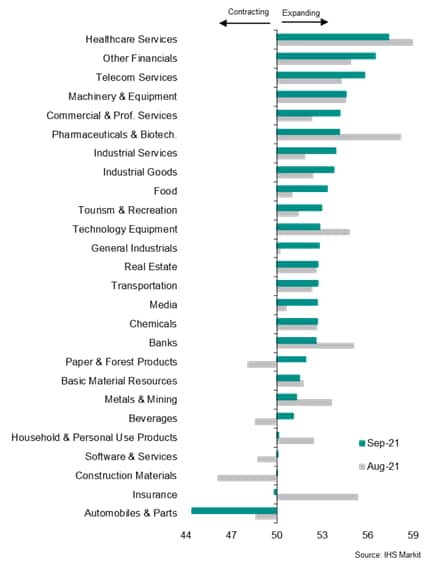 The September drop in auto production was also notable in representing by far the biggest underperformance of the sector relative to all manufacturing seen over the 12-year history of the global PMI sector data. 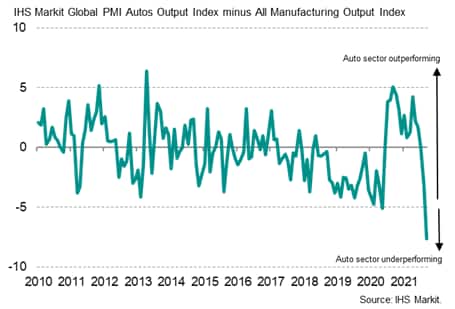 This widening underperformance represents a change from the outperformance seen in the year to June, when auto makers benefitted from strong demand amid a pandemic-related shift from public transport to cars.

However, the current underperformance marks a return to the near-constant, below-par growth recorded in the three years leading up to the pandemic, which was a period marked by falling demand for cars amid the shift to electric vehicles and concerns over rising tariffs due to the US trade war. New orders fell in the sector continually between late-2018 and the start of the pandemic. 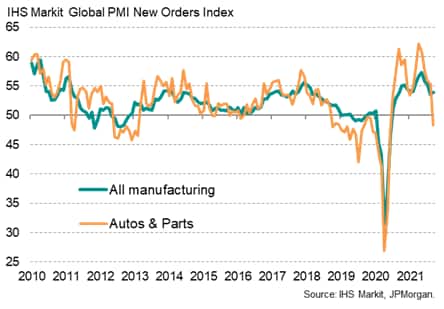 While September also saw a return of weakening demand, with new order inflows into the auto sector declining for the first time since June of last year, it is worth noting that backlogs of orders rose at an increased rate, posting one of the largest expansions seen over the past decade as production still lagged demand. These 'pent up' orders suggest that demand is not the only cause of the weakening production trend in September. 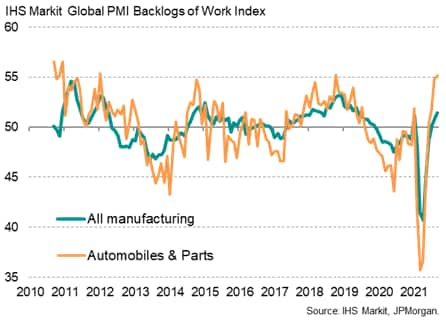 This shortfall of output relative to demand is further illustrated by the divergence between current output growth and new orders. Despite easing in September, the new orders index for the global auto sector remains considerably higher than the output index, albeit the gap narrowing somewhat from the all-time high seen in August. 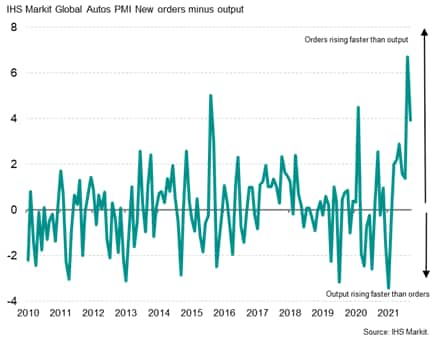 The surveys therefore point to demand exceeding production capacity over the third quarter as a whole to an extent not previously recorded by the surveys, and a shortfall that greatly exceeds that seen in any other sector covered by the PMIs. 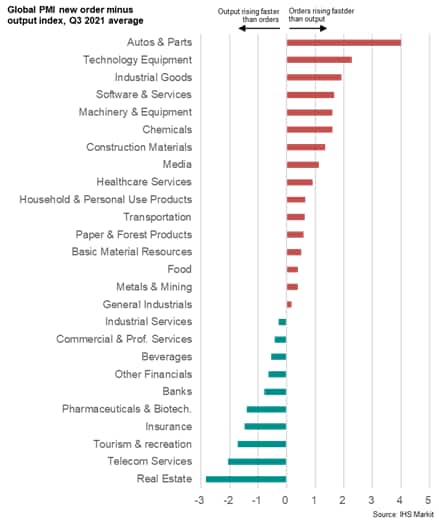 The production shortfall is first and foremost caused by supply chain delays. Average supply delivery times reported by global auto and parts makers showed the longest lengthening on record in September, having lengthened continually during the pandemic. The lengthening for the sector in September also exceeded the average for all manufacturing, suggesting car producers are facing worse-than-average supply delays. 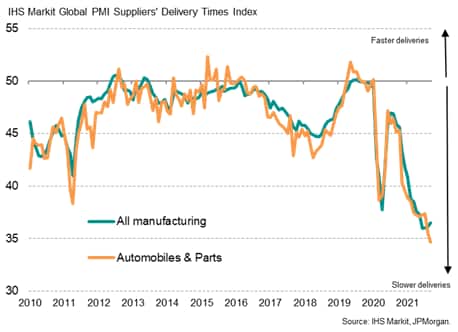 While the supply delays were reported for a broad variety of components, the most widely reported issues were related to the provision of semiconductors. Some encouragement can be gleaned from a decline in the number of global manufacturers reporting shortages of semiconductors to have been in short supply in September, dropping from an all-time peak in the April to May period, albeit still running at almost eight times the long-run average to underscore the ongoing supply challenges.

Some further encouragement can be drawn from the PMI survey's future expectations index, which asks companies whether they anticipate their own output to be higher, the same or lower in a year's time. This index had slumped to a 14-month low in August among auto sector companies, but rebounded in September to hint at some renewed optimism about the year ahead. 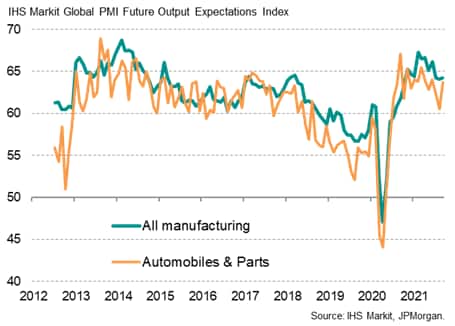 Whether this renewed optimism is met by reality depends not just on the supply situation, which overall showed no sign of improving in the auto sector in September, and the current state of demand, which also deteriorated in September. The suppliers' delivery times index and new orders indices will therefore be key indicators to watch going forward.