This column is based on Eurostat's COMEXT database, IATA industry reports as well as data from IHS Markit Maritime & Trade GTA Forecasting, and other resources offered by IHS Markit.

Eurostat's COMEXT data will be integrated with the IHS Markit GTA Forecasting database by the end of May 2021 to better split the global trade volumes between different modes of transport and to increase the number of modes reported for EU-trade to accommodate rail and road transport. The new research article based on the upgraded GTA Forecasting dataset will be published in early June.

2020 proved to be one of the most difficult years in the history of aviation and simultaneously one of the worst for the global economy due to the biggest black-swan in a century, the COVD-19 pandemic.

The pandemic is not over, however, the unprecedented speed of development of successful vaccines, progress with mass vaccination schemes in particular in the advanced nations, can spur some optimism that within a year or two years, we will be able globally to control the situation. The crises have proven the vulnerability of the global economy and that different parts of the world were affected the different degrees.

Airborne trade plays a significantly more important role in servicing global trade flows in terms of nominal values than volumes - mostly due to the structure of products being transported. In the present article, we will focus on volumes and the extra-EU trade flows (due to data availability).

According to IATA reports, revenue passenger-kilometers (RPKs) fell drastically by a staggering 66% year-on-year - eight times faster than during the 12 months following the 9/11 attacks, which was considered to be the most severe aviation crisis before 2020. One of the regions most affected was Europe. In 2020, the industry-wide passenger load factor (PLF) was on average 17.8 percentage points lower year-on-year and stood at 64.8%.

The expected rebound was adversely impacted by the third wave of COVID-19 cases, new regional/nationwide lockdowns, and increased travel restrictions. International air markets have been impacted to a greater extent than domestic routes since many countries closed their borders or imposed travel regulations to limit the virus spread.

Air cargo in 2020 was affected more than global trade volumes (CTKs fell by 10.6% yoy with global trade volume falling by 5.3% but significantly less than passenger flows). Air cargo volumes improved significantly in Q3 and Q4 2020, from the lowest point in Q2, with global CTKs reported by IATA down only 0.5% year-on-year in December. Nonetheless, 2020 brought the largest decline in CTKs from 1990.

While an inventory restocking cycle has started in the latter part of the year, benefiting air cargo, capacity constraints are still hampering a fuller recovery.

IATA reports that industry-wide available cargo tonne-kilometers (ACTKs) down 23.3% year-on-year in 2020, on the other hand, cargo load factors, yields, and revenues rose to record-high levels, providing support to airlines and some long-haul passenger services adversely affected by a collapse in passenger revenues.

International CTKs declined in all the main regions except Africa (up 1.9% year-on-year) in 2020. It is worth stressing that Europe is responsible for 23.6% of global CTKs. IATA reports that CTKs in Europe went down by 16.0% with available cargo tonne-kilometers (ACTKs) in Europe decreased by -27.1%. Freight load factor (CLF, % of ACTKs used) went up by 7.9% to 59.7%.

The role of air cargo in extra-EU27 trade

To illustrate the impact of COVID-19 on air cargo flows in Europe we have utilized the EU Eurostat's extra-EU trade since 2000 by mode of transport, by HS database. 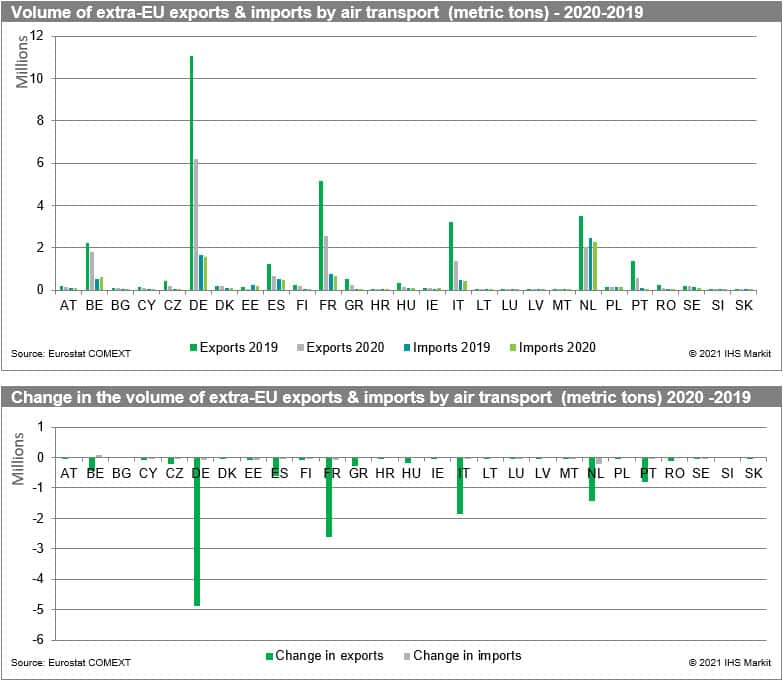 It could be due to the nature of the crisis - a simultaneous shock to global supply (production stoppages, lockdowns, extra safety procedures, disruption to global value chains) and demand (weaker demand for products & services, lower consumer confidence). 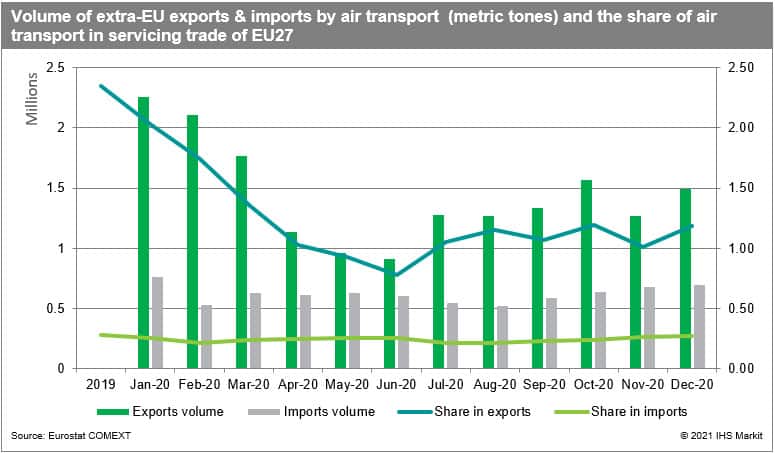 Malta is the EU-27 Member State with the highest share of extra-EU exports volume serviced by air cargo (7.65%), followed by Germany (3.15%) and France (2.18%) and Portugal (2.13%). To put everything in the correct context please consider the actual volume of exports. In 2020 the share went up only in the case of Malta & Bulgaria. 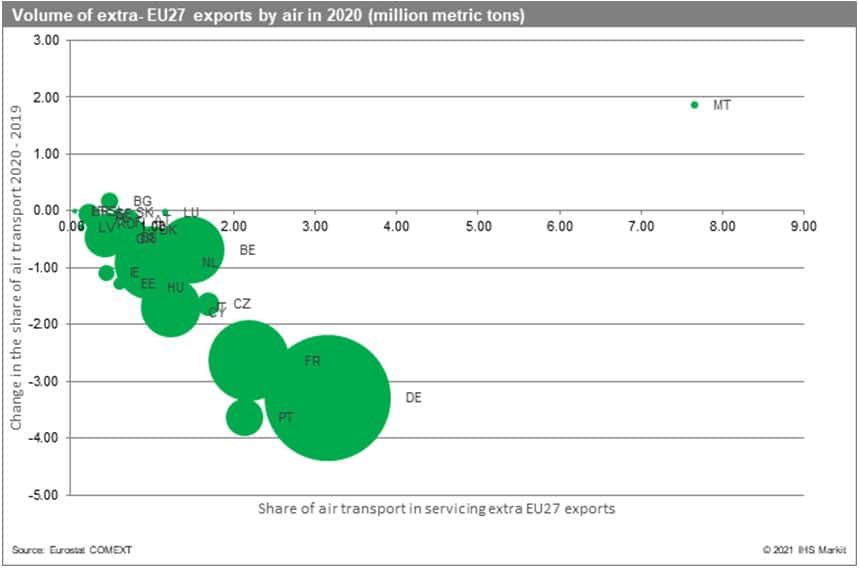 The share generally increases in distance from Europe, but to a large extent depends on the geographical features of the destination and product structure of the trade flow. 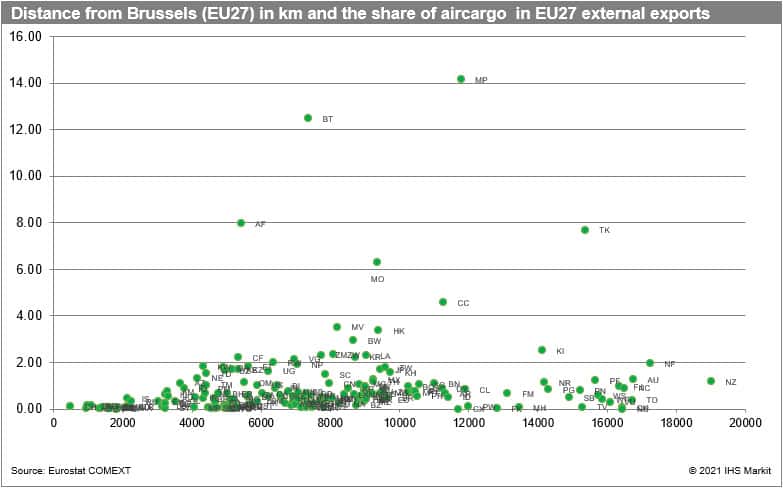 The product structure of extra-EU-27 exports and import volumes in 2020 varies significantly with the highest volume of exports being the supplies for ships and aircraft and cut flowers and flower buds in imports. The commodities transported include a variety of goods from various sectors including fresh plants, vegetables, and fruits, specialized high-tech or medium-high technology goods, high-value-added goods and materials.

In exports outside of EU-27 in turn the highest shares are observed in the case of books (confidential trade of chapter 49), chemical elements and compounds doped for use in electronics, revolvers and pistols, electron microscopes, proton microscopes and diffraction apparatus, liquid crystal devices and lasers as well as optical microscopes, incl. those for photomicrography, cinephotomicrography, or microprojection. 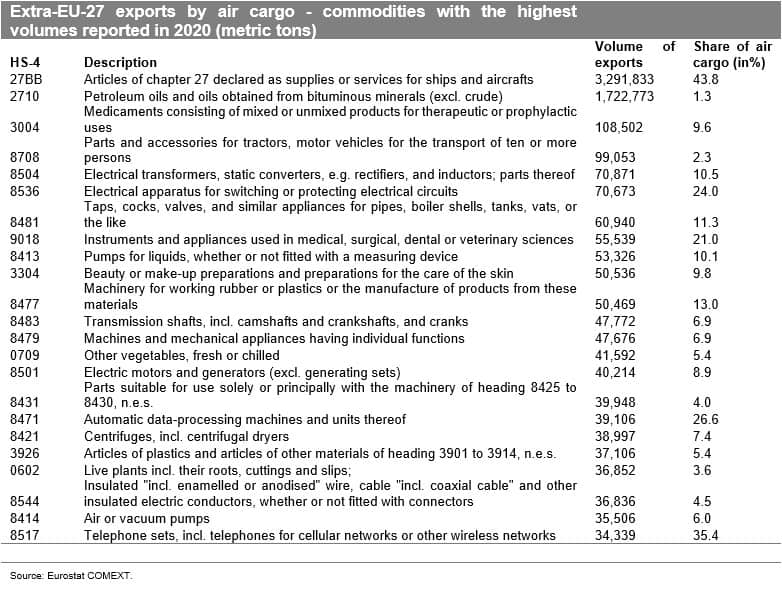 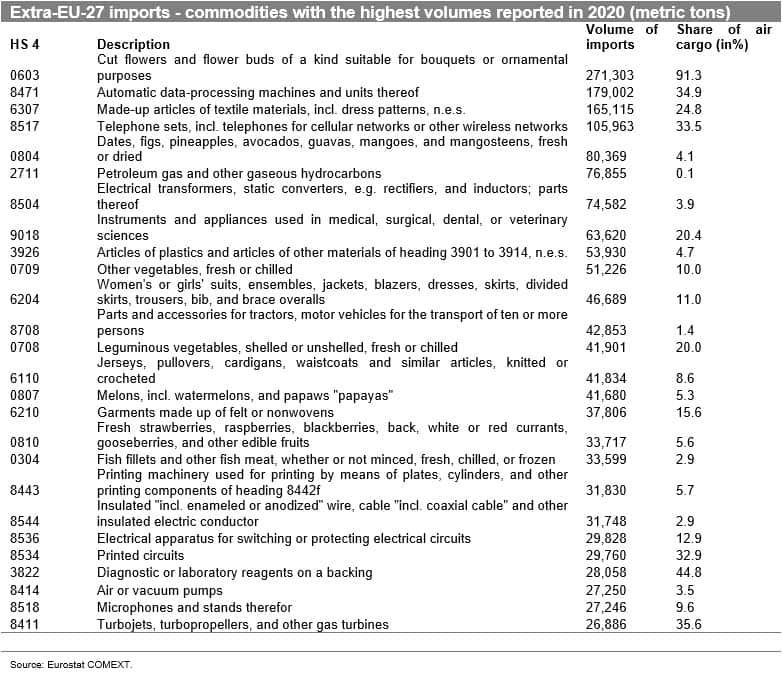