Amid the widespread 'gilets jaunes' demonstrations in France, December PMI data pointed to the first monthly contraction in French private sector output for two-and-a-half years. The campaign, initially protesting against an increase in fuel taxes, caused disruptions to both the demand and supply-side of the economy.

The negative impact was felt across both the manufacturing and service sectors, with service providers registering their first fall in business activity since June 2016 and goods producers seeing output decline at the fastest pace for over three-and-a-half years. The PMI results now point to quarterly GDP growth of approximately 0.2% for the fourth quarter of 2018. However, with growth momentum being lost throughout the quarter, the December PMI readings alone were consistent with the economy contracting. 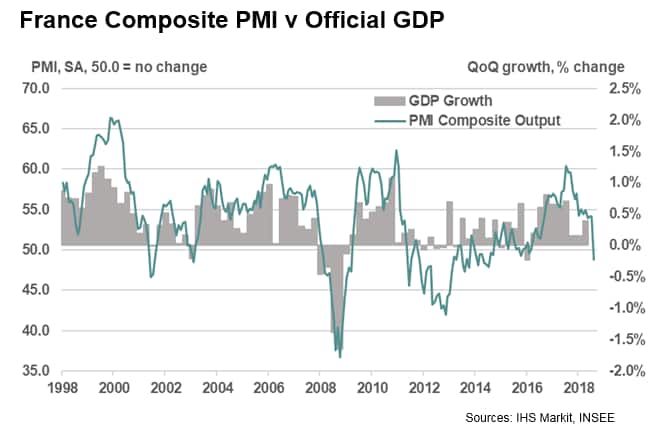 As well as dampening growth at the end of 2018, and potentially at the start of 2019, 'gilets jaunes' disruption was in part responsible for restricted job creation in December. With output falling due to the protests, private sector firms increased staff numbers at the slowest pace for 20 months, according to the latest PMI data. At the sector level, the weak performance was driven by a second successive contraction in manufacturing employment. Meanwhile, services companies reported their softest rate of hiring since April 2017. 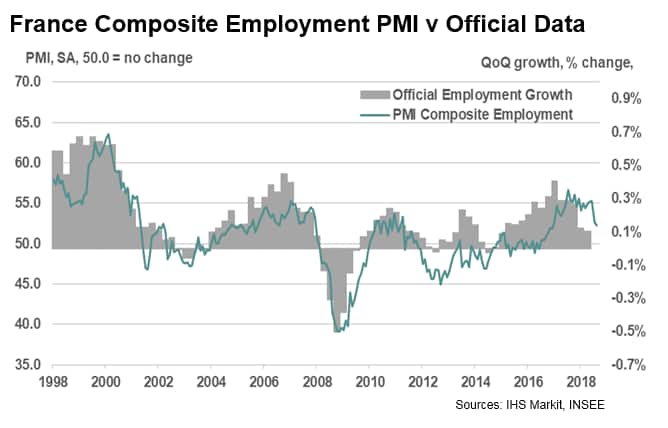 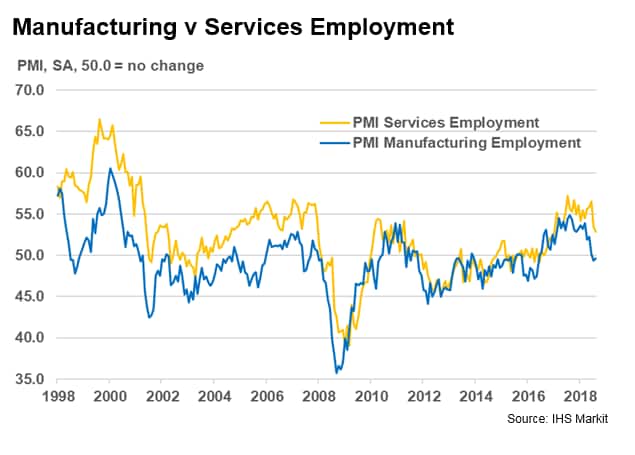 The results from the final month of 2018 continue the downward trend seen since the start of the fourth quarter, and with protests still ongoing, it may be the case that this negative momentum will carry forward into the opening months of 2019.

In addition to their direct effect on the economy, disruptions have also caused delay to Emmanuel Macron's proposed reforms to unemployment insurance. French unemployment remains stubbornly high, and although the situation is better than in Italy, France continues to lag-behind other large European economies such as Germany and the UK. 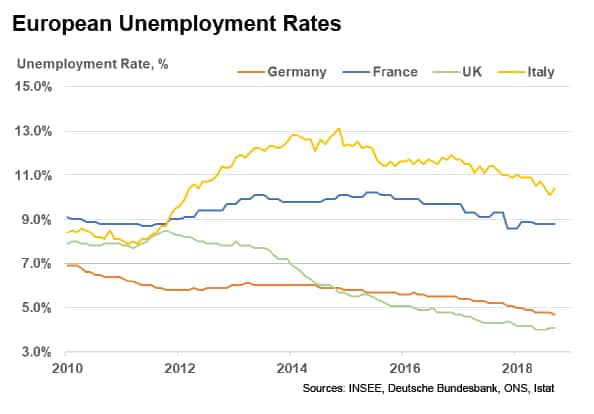 A generous benefits system and a mismatch of skills between workers and vacancies are widely believed to be key causes of France's relatively high unemployment. Although the proposed reforms will not solve the latter issue, the French government hopes that changes to unemployment insurance will increase the incentive to work and deliver a boost to employment.

However, with the French government focused on actions to alleviate the discontent of the 'gilets jaunes' movement, the reform agenda was put on hold at the end of the fourth quarter.

Moreover, despite the pledges from Emmanuel Macron and French Prime Minister Edouard Phillippe for a rapid reform agenda in coming months, protests entered 'Act 9' at the weekend. They will continue to draw the government's attention and weigh heavily on its ability to pass meaningful reforms.

Flash PMI data for France will be published on 24th January, which will show how the economy is faring at the start of 2019.