Majors BP and Shell, utilities like Vattenfall and RWE, and chemical refiners like BASF, Linde, and Dow all are likely to benefit from promised German state funding for 62 hydrogen projects.

An additional €20 billion ($24 billion) in backing for projects is set to come from private investors and other sources so that funding levels reach an expected €33 billion ($40 billion).

Germany's funding for the projects is contingent on the outcome of an application for EU State Aid law exemptions under the EU's Important Project of Common European Interest (IPCEI) program. The EU put out a call for proposals to regional companies to join a hydrogen IPCEI in December.

For example, in a successful bid under the production category, France's TotalEnergies will team up with industrial gas supplier Linde on a green hydrogen hub in Leuna, where Linde is commissioning a liquid hydrogen plant and what it says is the world's largest electrolyzer.

A particularly large number of studies will focus on the use of hydrogen in the steel industry, which often uses coal as an energy source, as a reducing agent, and as a source of carbon alloys. Steel producers active in Germany like ArcelorMittal, Saarstahl, Salzgitter, and Thyssenkrupp Steel secured funding pledges for projects.

Also in the industrial category, a project of Ørsted Wind Power will use green hydrogen and carbon to produce sustainable cement as well as products like e-fuels, e-chemicals, and e-methanol.

A significant number of projects winning support were notched by GET H2, a green hydrogen infrastructure initiative backed by 50 partners, including BP and German utility RWE. Its winning bids made up 19 of the 62 projects promised funding, according to a statement.

BP is involved in a consortium within GET H2 that plans to spur the industrial use of green hydrogen via a cross-border pipeline and infrastructure between Lingen, the Ruhr area of Germany, the Dutch border, and Salzgitter in Germany.

RWE is participating in two of the GET H2 projects and two additional projects. In one of the GET H2 projects, RWE plans to store hydrogen in RWE Gas Storage West's salt caverns in Gronau-Epe. Elsewhere in Germany, RWE Generation will operate a 300-MW electrolysis plant in Lingen and a plant for the production of green steel in Salzgitter. It will also oversee the conversion of a gas pipeline connecting Duisburg and the Salzgitter site to the Dutch gas network.

In addition, RWE will oversee the construction and operation of a 100-MW electrolysis facility at the Rostock seaport that will produce green ammonia, which may be used to facilitate hydrogen transportation. RWE is working together with Rostock Port on production capacity of up to 1 GW.

Including those projects which have not been promised funds under the latest deal, RWE is involved in 30 hydrogen projects. "We are very pleased that three of these projects have now been pre-selected to be integrated and funded in an IPCEI project. This gives our hydrogen activities an additional boost," Sopna Sury, chief operating officer Hydrogen RWE Generation said in a statement. 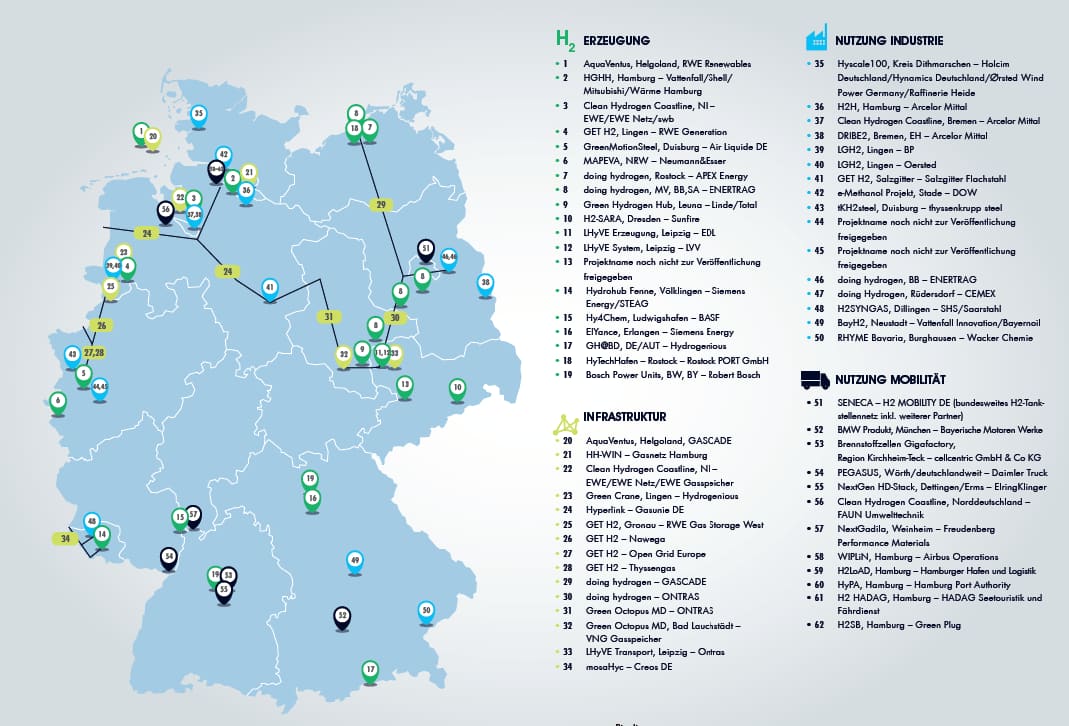 The projects are a "big step" for Germany's climate-neutrality strategy, according to the ministries. The government recently clamped down harder on emissions, speeding up plans to reach net-zero goals after a court order enforced stricter climate laws.

Germany is hoping to seize the growing momentum behind ESG finance to become a global leader in hydrogen. "We want to become number one in the world in hydrogen technologies. To do this, we are pooling our strengths in Europe and initiating massive investments in the future [fuel] hydrogen with the first joint European hydrogen project. That secures competitiveness and jobs, in Germany as well as in Europe," Federal Minister of Economics Peter Altmaier said in a 28 May statement on the hydrogen project funding.

The stars have been aligning on hydrogen for over a decade. The European Parliament in 2007 urged EU member states to develop a hydrogen economy. Last year, the EU and Germany followed Japan in launching hydrogen strategies. The German government's 62 projects put it on a path to fulfilling the green hydrogen ambition of its strategy, as they include hydrogen production that would meet 40% of the - GW goal set for 2030.

IHS Markit estimates that Europe will benefit most from $265 billion in global hydrogen investment expected by 2030, and the bulk of this will be spent on developing green hydrogen ($165 billion). The remainder will be spent on production of hydrogen sourced from natural gas.

Germany has been involved in hydrogen studies since at least 1989, when German foundation Ludwig-Bölkow-Stiftung and Canadian utility Hydro-Quebec launched a feasibility study on shipping hydropower-sourced renewable hydrogen from Canada to Germany by tanker.

While the project never obtained enough funding to be implemented, it laid the groundwork for hydrogen combined-heat-and-power and fuel cell studies in Germany, according to Ludwig-Bölkow-Stiftung.

But since then, hydrogen moved up the global agenda and technology advanced.

"In order to build a successful national hydrogen economy, you need a combination of ability and willingness that was not there at the time. Renewable energies have a much higher priority today and are better integrated into the energy system. The technology has also been significantly further developed, especially in the area of ​​fuel cells," Managing Director of Consultancy ESN EnergieSystemeNord Jörg Lamp, who worked for Hamburg Gas Works in the 1990s, wrote in a recent blog.