The downswing in German industry that began in early 2018 is now expected to lead to back-to-back quarterly declines in GDP during the second and third quarters of 2019, albeit shallow ones at around -0.1% quarter on quarter (q/q).

There are cyclical and structural reasons for this downturn - dominated by external factors - while car manufacturers face additional sector-specific issues. The main cyclical influences stem from foreign economic policy decisions that substantially raised global uncertainty levels (US protectionism; Brexit), while the key structural change is the slowdown in Chinese trend growth and the accompanying shift away from investment (and thus demand for capital goods) towards consumption. As traditional German export strength is based on investment goods (plants and machinery), these factors have hurt the German economy disproportionately.

The special factors that triggered the initial quarterly GDP decline in the third quarter of 2018 and the subsequent corrective rebound in early 2019 - the introduction of stricter car emission test rules (WLTP) and drought conditions that inhibited production logistics - only obfuscated underlying developments. A steady growth pace of around 2% during 2014-16 was followed by temporary acceleration above 3% during most of 2017 before weakening to less than 1% in 2018 and slightly negative growth most recently.

The key reason why the economic downturn has been less pronounced than in 2012-13 (eurozone debt crisis), let alone during the post-Lehman slump of 2009, is the resilience of the domestic economy. The service sector has remained in expansion mode due to above-average nominal and real wage growth in 2018-19, consumer confidence remaining well above historical averages, and unemployment only bottoming rather than rebounding. Furthermore, the construction sector continues to benefit from pent-up demand, demographics, and exceptionally low interest rates. In addition, fiscal policy has already become more expansionary in 2019, a fact that is frequently overlooked by concentrating on headline budget surpluses that are still benefiting from sound tax revenue growth.

Notwithstanding this domestic resilience, there is one important sector that is also burdening economic growth for reasons beyond slumping external demand, namely automobiles (see chart below). This sector has to additionally cope with increasing regulatory pressure related to public health (SO2 emission limits linked to diesel cars threatening driving bans in cities) and climate change (shift from internal combustion engine- to electric- or hydrogen-powered vehicles). The car output slump in mid-2018 related to the WLTP introduction thus only exacerbated matters for a sector already unsettled by these secular changes.

On the one hand, Germany's current economic slump is not as deep as in 2012/13, let alone in 2009, because burdening external influences have not come as a sudden shock, giving German companies more time to adapt, and because German consumers are not overly concerned due to being shielded by above-average income growth and persistently benign perceptions about their job security. On the other hand, the risk that economic weakness lasts longer than in past recessions looms large due to the structural changes in the automobile sector and the increasing likelihood that globalization in the sense of ever more internationalized supply chains will be partially unwound during 2019-20. Only once (US-led) protectionism recedes again, Germany's export industry can regain momentum - which will hardly be before 2021.

The two main risks for not only an extended but also deepening economic slump in Germany are, firstly, if the US-China trade war escalates even further and/or President Donald Trump decides to introduce new tariffs on the European Union as well (especially if concentrated on the car industry), and, secondly, if the United Kingdom eventually does exit the EU without a deal. The latter would not only have near-term repercussions due to disrupted supply chains but also complicate and delay agreement between the EU and the UK about future trade relations, especially if the UK threatens to break apart and violence erupts between Ireland and Northern Ireland.

Given the scale of de-globalization pressures and the ongoing importance of exports for German GDP, Germany's economy has coped relatively well so far. July data on merchandise exports, for instance, were a pleasant surprise, defying leading indicators that had rather argued for another decline.

Nevertheless, the longer this phase of weak external demand lasts, the greater the risk of dampening spillover effects on Germany's services sector and thus domestic demand. Leading indicators such as manufacturing PMI or the Ifo business confidence survey, reaching until August (see chart below), do not indicate any imminent cyclical recovery. If additional risks are realized, such as the above-mentioned potential escalation of US tariffs on Europe or a no-deal Brexit, a deepening recession could ensue. 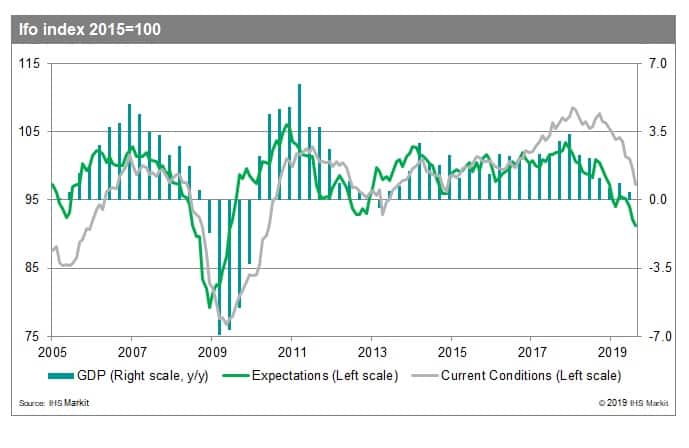 Our baseline forecast, predicated on the absence of major additional risks being realized, assumes that Germany's economy very gradually recovers in 2020 from a stagnation/light recession phase at present, resulting in average growth of 0.6% next year from 0.5% in 2019. The apparent ability of the British parliament to at least avert a no-deal Brexit by end-October, recent indications for a fresh rapprochement between the US and China on trade negotiations, and also the new Italian government coalition without the right-wing populists are tentatively encouraging developments. The global environment remains fragile, however, and the German automobile sector's structural travails will remain a restraint for years to come.

Our Chief Economist in @Marketplace “Because of massive uncertainty you will see a pulling back of any capital spen… https://t.co/8pGcBHD4t3

great coverage of the research coming from our US regional team. https://t.co/2OaQQZSrcJ