Various governments will meet at the 26th UN Climate Change Conference of the Parties (COP26) in Glasgow from 31 October to 12 November 2021. COP26 aims to "accelerate action towards the goals of the Paris Agreement and the UN Framework Convention on Climate Change (UNFCCC)". We examine the likely negotiation stance of Sub-Saharan African (SSA) governments at COP26.

SSA is highly likely to present a united negotiating position at COP26.

Africa's stance in negotiations will reflect recent largely-unified Pan-African attempts to negotiate access to COVID-19 vaccines and debt relief. Against the background of an unofficial ban on exports of vaccines by India, several SSA countries joined the African Union's African Vaccine Acquisition Trust (AVAT) initiative, allowing AU Member States to agree to the advanced purchase of hundreds of millions of vaccines by paying only 15% of the cost upfront, with the remaining 85% to be financed by the Africa Export-Import Bank, which pledged USD2 billion in advanced procurement guarantees, organizing a five- to seven-year repayment period for governments. With multilateral support, the region also has managed to coordinate debt deferment efforts under the Debt Service Suspension Initiative (DSSI) and subsequently the G20 Common Framework and other various IMF rapid financing arrangements. The region is thus highly likely to leverage these joint initiatives by preparing a united negotiation stance at COP26 on the issues of climate change, the energy transition, and how it impacts the continent, with particular focus on the crucial need to obtain much-promised climate funding for the continent's economies. 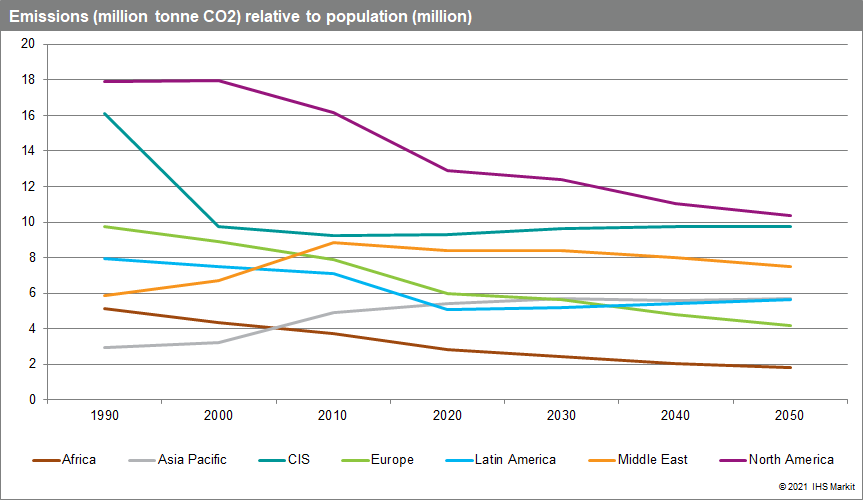 Various African governments such as Nigeria, South Africa and Ghana have indicated they will send high-powered delegations to COP26 to press home the main point that any transition must be "just" and consider the economic asymmetries between countries. African countries are likely to oppose proposals for them to have more ambitious Nationally Determined Contributions (NDCs). All SSA countries are signatories to and have ratified the Paris Agreement and have deposited their intended NDCs with the United Nations. This covers both conditional targets, which need international financial support and self-financed unconditional targets. IHS Markit's analysis shows that SSA generates the lowest carbon emissions in the world, both in terms of overall volume and on a per-capita basis.

The African group of negotiators will focus on demanding increased financial support and grant funding for climate mitigation and adaptation.

Several developed countries at the United Nations climate summit in Copenhagen in 2009 committed to mobilizing USD100-billion a year by 2020 - a cumulative amount of USD1-trillion - to support developing countries with climate mitigation and adaptation. This promise was again extended by five years through to 2025 at the 2015 Paris Climate Summit. However, available data and reports from several organizations, including the OECD and UK House of Commons, indicate that this pledge has not been met. An average of USD64-billion was recorded as being provided between 2013 and 2019. Further OECD data shows that between 2016-19, 43% of climate finance went to Asia while only 26% went to Africa, despite the latter region being one of the most vulnerable to climate change, as indicated in various Intergovernmental Panel on Climate Change (IPCC), and other reports. OECD data also shows that most of these funds have been channeled through multilateral public (43% of 2019 inflows) and bilateral public (36%) funding sources with private financing and export credits amounting to 18% and 3%, respectively.

However, further scrutiny of the publicly-supplied funds showed that 79% of such funding provided in 2019 was in the form of loans, which according to Oxfam and other international development organizations, are largely non-concessional. Given this background, African negotiators are likely to advocate for a large increase in climate finance funds, potentially seeking in excess of USD-1 trillion per annum for all developing countries by 2030, as corroborated by Zaheer Fakir, a lead financial coordinator for the African Group of Negotiators on Climate Change. Fakir also claims that the original USD100 billion pledge was a political commitment rather than an assessment based on needs. According to South African President Cyril Ramaphosa, Africa needs USD240-billion a year to shift to clean energy, mainly from grant funding.

SSA governments are highly likely to advocate using all energy resources at their disposal, including carbon-offset strategies; countries are likely to follow divergent individual transition strategies.

As flagged earlier, SSA contributes less than 4% of carbon emissions globally (the lowest region globally). The continent also faces acute multidimensional energy poverty, made more onerous by the COVID-19 pandemic and prior economic dislocations such as the 2014-17 commodities price slump. The region's energy needs are massive - 900 million or 82% of the region's population lack access to clean cooking fuels, while 600 million or 55% of citizens lack energy access. In the post-COVID environment, regional governments face heightened fiscal burdens, reducing the scope for government funding to address the shortfall. Many regional policymakers recognize that private-sector participation will be essential to develop both conventional and renewable energy sources needed for industrialization, the former to guarantee reliable baseload power supply.

IHS Markit analysis shows that hydrocarbons will continue to meet an important share of SSA's energy demand in the future, with gas (including hydrogen) and renewable energy sources (wind, solar) constituting an increasing share of the energy mix. In this regard, African negotiators are highly likely to lobby at COP 26 for a relaxation of ESG constraints on the financing of investments and provision of partial risk guarantees by development finance institutions for natural gas transmission from supply to demand centers for electricity generation and other industrial uses. Additionally, African governments are likely to lobby to attract public and private funding for new resource-based industrialization using critical minerals such as lithium, copper, and cobalt needed for the energy transition, which are abundant on the continent. IHS Markit's analysis shows that SSA's vast endowment of green-energy-appropriate metals and minerals will increasingly attract private-sector investment, but the region needs to address its infrastructure, regulatory environment, and political stability issues. This new resource-based industrialization model is also likely to seek to generate new industrial clusters such as the manufacture of PV modules and components for electric vehicles (EVs), capturing more of the value chain and creating sustainable jobs.

Finally, SSA countries are likely to follow divergent or individual country-driven transition strategies. For example, almost 80% of Tanzania's energy mix is natural gas and hydropower, but its government aims to increase coal's share in the power mix from 0% to 25% by 2040. It has reportedly sought to restart stalled negotiations with a private Chinese firm to develop a 600 megawatt (MW) coal-to-power plant in the southwest of the country where most of its estimated 1.6-billion tonnes of coal deposits are estimated are located. Greenfield coal investments are unpopular with multinational financial institutions in Europe and North America because they are highly polluting. Despite the Chinese government's announcement in September that it would not fund overseas coal power projects, some Chinese firms appear likely to gain financing for the USD3-billion project from Chinese banks. Conversely, South Africa, despite its chronic energy shortages and supply problems, is seeking to replace most of its coal-based generating sources with more variable RE supply, namely wind and solar. Namibia is also reportedly seeking to set up a hydrogen hub. In Kenya, the government plans to diminish the share of oil in its power mix and further increase the share of geothermal, solar, wind and natural gas. Likewise, in West Africa, natural gas will dominate the energy mix in key economies such as Nigeria, Ghana and Cote d'Ivoire. 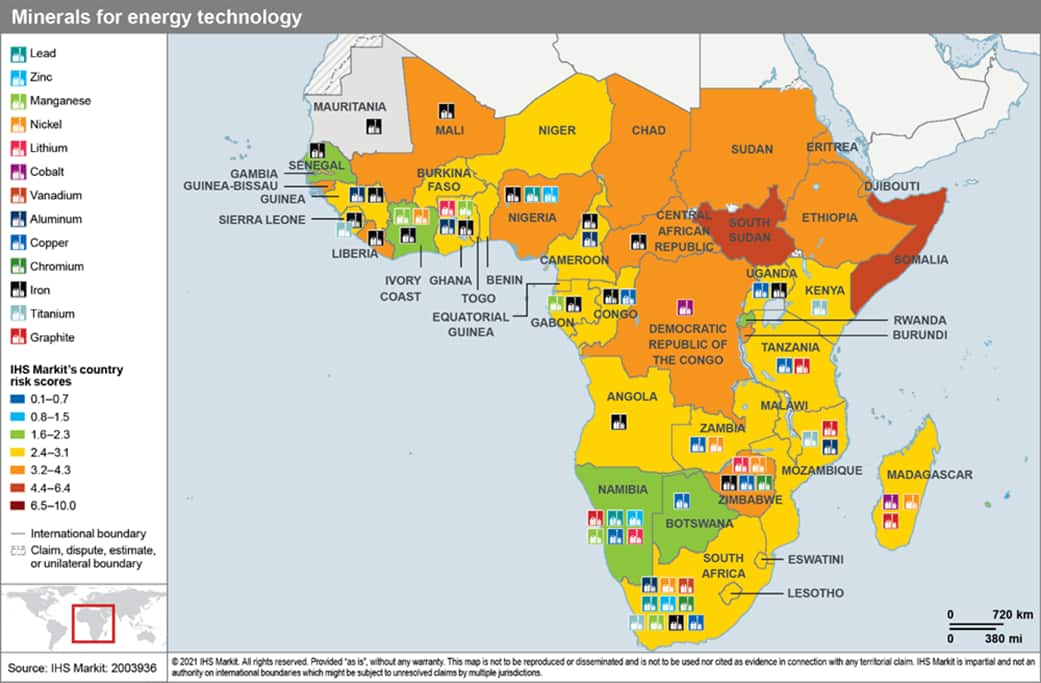