Being responsible for a database that provides drug prices in more than 36 countries, I regularly observe price trends and compare prices between countries. Recently I looked at generic prices in the largest European pharmaceutical markets - France, Germany, Italy, Spain and the UK.

Cross-country Comparison of Generic Drug Prices in France, Germany, Italy, Spain, and the UK
I then compared generic prices between those five countries. Average manufacturer prices per mg or mcg were compared for 10 genericised active ingredients. The infographic below illustrates price differences between the different countries for 10 genericised active ingredients - click on the image to see the full-size version. 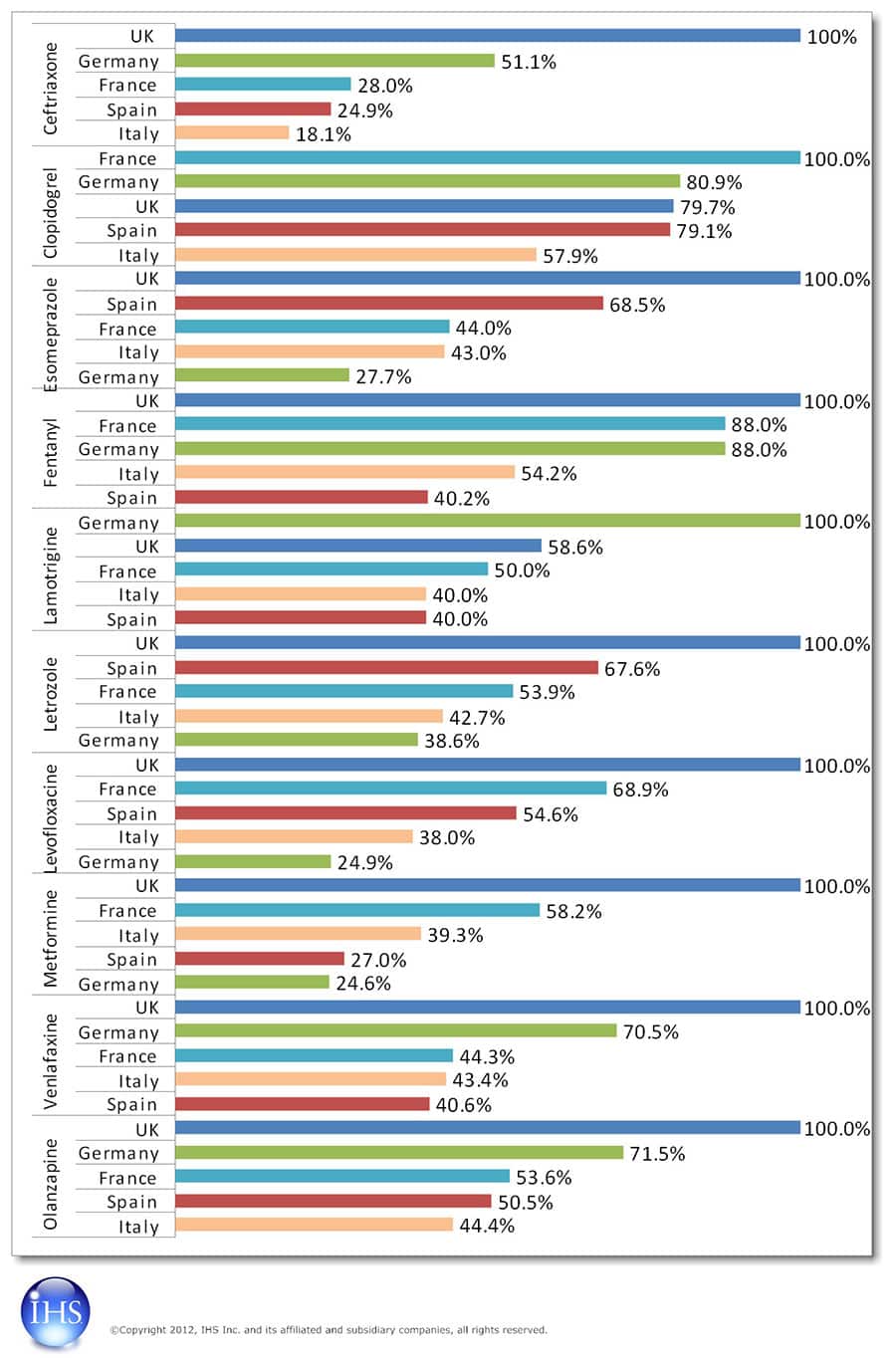 The data demonstrate the complexity of the generic markets.

Nonetheless, despite the strong regulation of the French generic market, generic prices are not necessarily found to be among the lowest. Indeed, the legislation does not leave any room for manoeuvre for pharmaceutical companies, which cannot deviate from the law. As in other countries, notably Germany and the UK, generic prices are left to market forces: pharmaceutical companies implement pricing strategies that dramatically changes price comparison between countries.

Germany and the UK
In Germany and the UK, generic pricing strategies are left to market forces and even though generic market entry very likely prompts prices to drop, this is not an absolute certainty.

Germany in particular displays significant price differences. Price differentials can range from generics being more expensive than their originator counterparts, to generics being more than 80% less expensive. Keep in mind that in Germany there are a large number of generic players, triggering fierce competition, which could explain those large price differentials. This also explains why - depending on the strategies implemented by companies - generic prices are sometimes found to be the lowest or the highest.

Likewise, in the UK we also see no clear rules. Generic prices are on average 15% below that of off-patents, but unlike Spain or Italy, large price differentials are observed within the sample. However, when UK generic prices are compared with other countries, they are often found to be the highest. Two factors could explain this :

Conclusion
I think it's clear that competition and reference prices strongly contribute to lower prices. Competition however allows companies to set their own strategies and can lead to significant price differentials. Nevertheless, even if prices of certain generics can be relatively "high", the cheapest alternatives are always available.

The key point to remember is that that strong legislation doesn't necessarily allow governments to lower prices to the same extent as with competition only. France is an excellent example of this trend.

The data from this research was taken from IHS PharmOnline International: a pharmaceutical pricing data and analysis tool providing coverage of all branded and generic drugs in over 36 developed and emerging markets.