Unconventional resources are rich areas of innovation and technology development in the oilfield. Two forces that often drive these trends are:

An additional innovation driver that can be overlooked is regulatory pressure. Community stakeholder concerns drive the introduction of regulations that can lead to the development and adoption of new technology. If the penalties for not meeting regulations are sufficiently stringent, these can be a greater driver for innovative technology development in the oilfield than cost.

We've already seen this dynamic with green completions that reduce emissions of methane and volatile organic compounds (VOC) during the flowback stage following hydraulic fracturing or re-fracturing of a well and the use of non-freshwater fracturing to decrease freshwater use. Another area in which regulatory pressures are driving innovation is in the Bakken (largely in North Dakota), to cut down on gas flaring. Because of the large price difference between gas and oil, production from new oil wells is often rapidly brought online while associated gas is flared. In 2013, 33% of associated gas (96.4 billion cubic feet) was flared in this play (see Figure 1). Other states with adequate gas infrastructure, such as Texas, flare less than 1% of the gas produced. 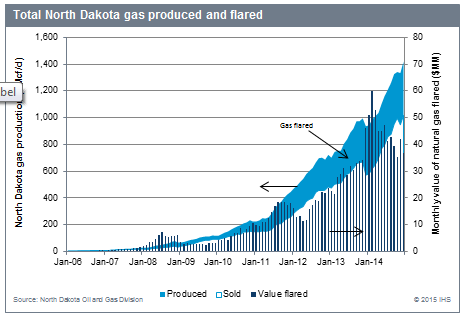 Rapid oil development has exposed producers to the inadequacies of the regional gas processing and transportation infrastructure in the Bakken. Although more than 1 billion cubic feet per day of processing capacity has been added in the area since 2010, gas infrastructure growth has been unable to keep up with the pace of field development.

Concerns from mineral rights owners, environmental groups, and the state over the volume of gas flared, with the potential revenue wasted and the impact on regional air quality, led the North Dakota Industrial Commission (NDIC) to adopt additional flaring restrictions in 2014 (see Table 1). In this case it was decreed that if established gas capture limits are not met, oil production must be curtailed. Coupling gas flaring penalties to higher-value oil production creates strong financial incentives for producers to reduce flaring.

The long-term strategy for producers to meet these reductions is through timely development of midstream infrastructure. However, long lead times for permitting, design and construction, the time required for producers to commit to capacity, and potential delays in obtaining pipeline rights-of-way mean that these solutions do not help meet the near-term limits.

To meet these gas-flaring reduction goals in the short term, a number of companies have turned to well site compressed natural gas (CNG) technology. In one such effort, Statoil entered in a joint venture with a large industrial conglomerate and a fuel logistics specialist to pilot a CNG technology and distribution service. In this pilot, high-value natural gas liquids were removed for sale from the rich gas that would otherwise be flared. The remaining methane was compressed and used to power two drilling rigs and one frack fleet with associated gas captured at the well site, reducing diesel consumption of these operations by 40-50%.

Mobile CNG technology is not new. It was initially developed for mobile fueling applications for cars, trucks, and buses. Use in the Bakken, however, required several modifications:

Since the start of 2014, Statoil reduced the amount of gas flared from 44% of gas produced to 20% to meet the 26% 1 October limit (see Figure 2). It did so even while oil production grew and the produced gas-oil ratio remained stable, indicating that compliance was due to new infrastructure and mobile CNG capture rather than curtailment of oil production. After an eight-month pilot, Statoil expanded the program to power six rigs and one frack fleet by the end of 2014. It estimates that this measure has reduced flared gas to 3-5 million cubic feet per day (MMcf/d) and saved $2 million in diesel costs by the end of 2014, covering the $1.6 million investment for the mobile CNG system. 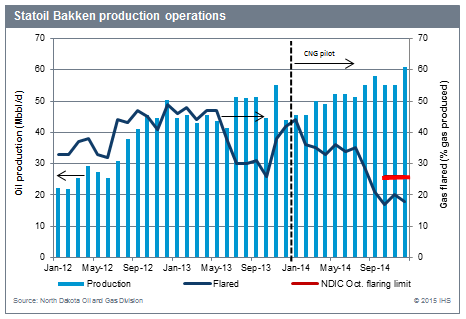 Now that the NDIC flaring restrictions have motivated development of mobile technology to address flaring concerns and monetize associated gas, this technology can also be deployed in other plays that have inadequate infrastructure (e.g., Eagle Ford) or are in inaccessible areas (e.g., Horn River). As unconventional resources play a greater role in energy supply and the concerns surrounding their development increase, regulatory-driven solutions will become an important force for technology development and deployment in the oil field.

To learn more about how regulation is driving innovation and promoting adoption of new technology in the upstream oil and gas industry, see the IHS Upstream Technology and Innovation service.

What are the significant barriers for South and Southeast Asia's commitment to their #climateplans following #COP26… https://t.co/kKSq4hRQwc