In a 5 June communique, G7 finance ministers announced concrete actions committing to reaching an equitable solution on the allocation of taxing rights. In addition to locating tax burdens for the largest and most profitable multinationals in their countries of operation rather than just where they are headquartered (Pillar One), the member states also committed to a global minimum corporate tax rate for multinationals of at least 15% (Pillar Two). The deal follows US Secretary of the Treasury Janet Yellen's call for a minimum tax rate in April and comes ahead of the 11-13 June G7 Leaders' Summit hosted by the UK. The ministerial communique targets the July G20 finance ministers and central bank governors meeting to reach an agreement on the Pillars. 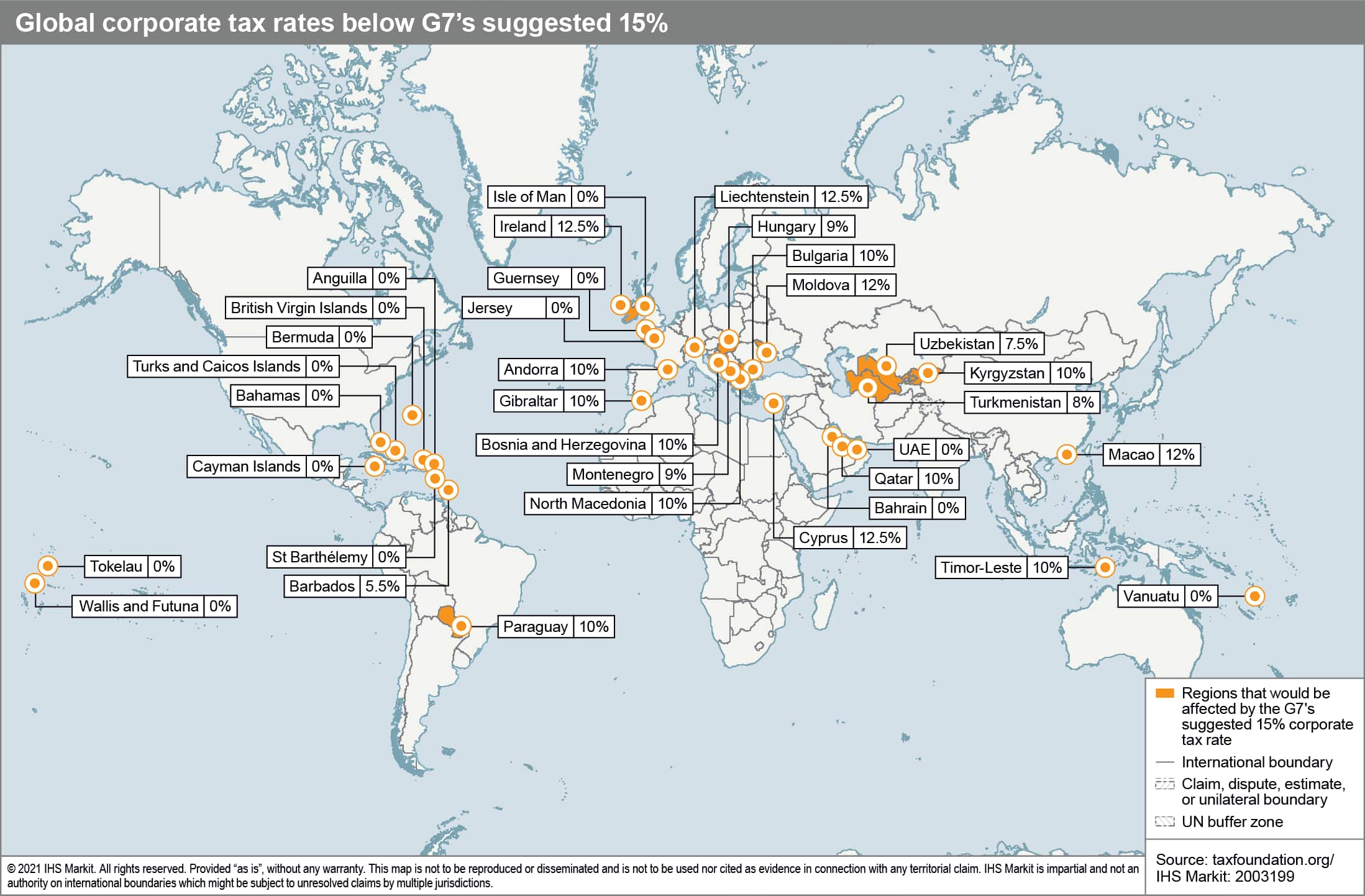 The US to push for a new global tax regime.

Despite maintaining US threats of new tariffs if European countries pursue unilateral digital service taxes, the US administration of President Joe Biden has signaled that it will continue to push for a new global tax regime, both to access an estimated USD533-billion revenue stream and as another opportunity to bolster US relations with major European allies, such as France and Germany. It has already agreed to discuss removing existing US tariffs on aluminum and steel and postponed imposing substantial sanctions on the construction of the Nord Stream 2 pipeline. With such moves, the administration hopes to encourage EU states to support other US foreign policy priorities, such as adopting tougher diplomatic stances towards China and Russia. Furthermore, it wishes to demonstrate to US allies that the US has recommitted to taking a leadership role in setting international standards and that it is also amenable to offering compromises to resolve existing international disputes. Although the administration is likely to join a newly negotiated international tax pact, getting US congressional ratification for its implementation will be challenging, especially in the event that congressional lawyers deem the new agreement a treaty, which would necessitate a two-thirds majority. Democrats currently hold minimal House and Senate majorities, and Republicans are likely to be united in their reluctance to give President Biden a diplomatic victory.

Internal EU disputes on corporate tax issues remain unresolved by a new European Commission corporate tax plan published in May, or by member states' needs to find additional revenues to cover raised state spending and accelerate economic recovery. The four G7 members in Europe already levy corporate tax at well above 15%: France (28%), Germany (29%), Italy (27%), and the United Kingdom (19%; which also intends to raise that to 25% from 2023). However, there are clear asymmetries among EU member states. While corporate tax rates range as high as 31.5% in Portugal, Ireland currently taxes corporate profits at 12.5%, and Hungary at only 9.0%. Ireland has used its low corporate tax regime as a key incentive to encourage firms to locate there. The risk of losing attractiveness as an investment destination implies that Ireland and Hungary are unlikely to support the G7 initiative in its current format. Since the European Union needs a unanimous rather than a qualified majority to pass new tax legislation, achieving the necessary EU unanimity is unlikely unless a compromise can be found.

The most likely outcome from the G7 Leaders' Summit is an agreed communique that restates the finance ministers' commitments on general principles but does not identify specific actions for countries - notably those currently likely to oppose the global standard. Should such a communique explicitly or implicitly link the G7 proposal to Pillar Two of the ongoing OECD/G20 Inclusive Framework that includes a global minimum corporate tax rate of 12.5%, this should create further momentum for the OECD proposal. Meanwhile, G7 members are likely to announce an agreement on broad principles, rolling the process onto the G20 finance ministers meeting in July, and thereafter to the October G20 Summit in Rome, where digital taxation is likely to be high on the agenda. That latter meeting is likely to be crucial to recruiting countries from outside of the "global north" and smaller non-G7 economies to support global arrangements for the taxation of multinationals. The support of some of those countries will be critical to any possibility of positively influencing Russia and China, which have given their own corporate tax rates at 20% and 25%, respectively, and which will probably view the standard-setting initiative in geopolitical terms as an attempt to push back against their influence globally.