Against the backdrop of the International Monetary Fund's (IMF) annual meeting on 12-18 October, finance ministers from the G20 group of leading economies on 14 October extended debt standstills for low-income countries under the Debt Service Suspension Initiative (DSSI) by six months until 31 June 2021. Furthermore, the United States Treasury urged G20 members to agree on adopting a so-called 'Common Framework' for debt resolutions, likely ahead of a G20 working dinner in November. This would likely tailor DSSI eligibility to only those countries experiencing high levels of debt distress, with IMF moving such countries from emergency financing with limited conditionality, to official programmes entailing more traditional fiscal and structural reforms.

The G20's debt relief agreement (DSSI) for official and bilateral creditors was extended by six months until the end of June 2021, although the participation of private creditors is very limited and voluntary. Complementing the IMF's emergency funds, the G20 finance ministers agreed on 14 October to extend by six months a moratorium on official bilateral and multilateral debt repayments, which will now last from 1 May until 30 June 2021 for all International Development Association (IDA) borrowers and Angola. Forty-six out of 73 eligible low-income countries have applied so far. Debt relief has been finalised with 35 countries under the DSSI, and the G20 has said that it will meet again before June 2021 over whether to agree another extension. However, the DSSI has largely failed to attract private creditors', given that participation is voluntary, coordination remains difficult absent an established legal framework for debt resolution, and private creditors' have overriding fiduciary obligations to their clients. Consequently, there remains a large gap in cost savings: savings specifically from official bilateral creditors under the DSSI total USD21.7 billion for all 73 eligible countries, compared with USD447 billion in total public external debt. The average cost saving to DSSI participants is less than 1% of GDP, although there is a large variation in savings: for instance, Bhutan's savings on debt servicing rise from 5.9% of GDP in 2019 to 10.1% in 2020. 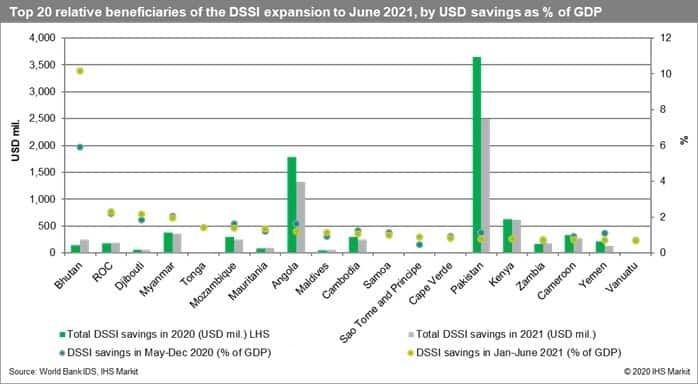 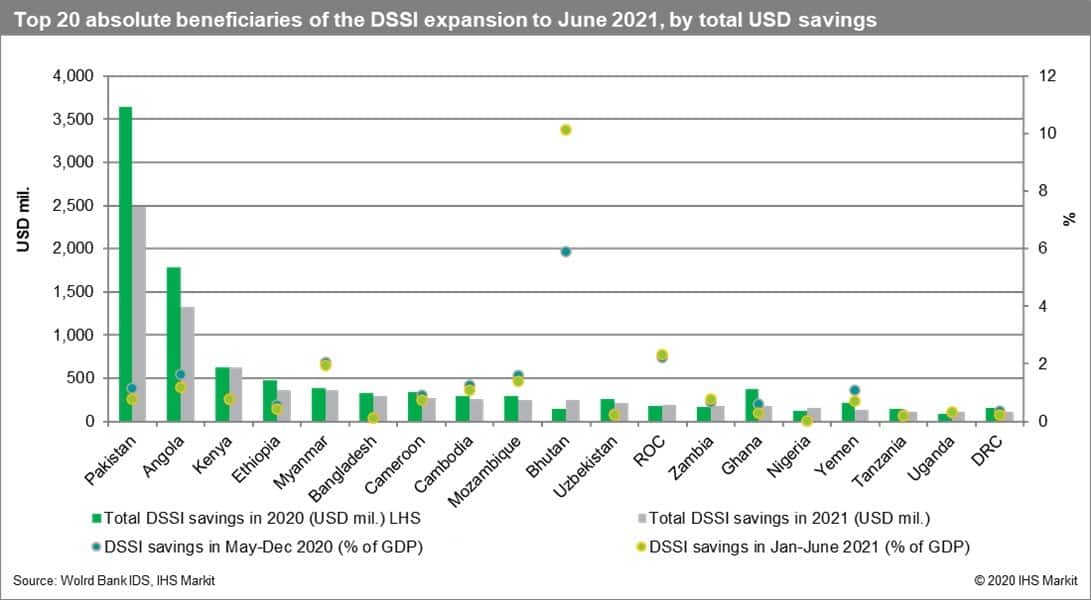 Under the proposed 'Common Framework' for debt resolution, the US Treasury is urging the IMF to move debt distressed low-income countries from emergency programmes to official ones that are likely to entail more traditional forms of fiscal and structural conditionalities. At the IMF and World Bank's steering session on 14 October, US Treasury Steve Mnuchin urged the IMF to resume "bilateral surveillance to provide much-needed policy advice". Mnuchin also proposed that G20 members agree to a 'Common Framework' for debt rescheduling and restructuring with low-income countries among all official and private creditors, probably ahead of the G20's working dinner on 20 November. Under the proposed framework, beneficiaries most likely will be contractually required to seek debt relief from non-Paris Club members, in line with its comparability of treatment principle. A key contention for the G20 will be around how China Development Bank (CDB) is classified by the Chinese authorities: the US has claimed that the CDB is treated as a commercial lender to avoid DSSI participation but China has rejected this stating that CDB lends at commercial rates and so is private.

The IMF has already received requests from over 100 low- and middle-income countries for emergency financing with minimal conditionalities attached, more than double the number that was approved during the 2008-09 global financial crisis. In response to the growing number of financing requests during the course of the coronavirus disease 2019 (COVID-19) pandemic, the IMF on 5 October extended by six months the annual quota available for eligible countries to access financing under the emergency one-year Rapid Financing Instrument (RFI) and three-year Rapid Credit Facility (RCF). This now means that 100% of a country's annual IMF quota can be used to access funding under the emergency facilities until 6 April 2021.

To hear more about fiscal austerity, the IMF, and the G20 listen to our latest podcast where we discuss if this can help hold off another lost decade.