The future of Italian reforms

The continued obstacles to fully reversing the productivity and growth malaise point to Italy remaining one of the weaker growth performers in the eurozone over the medium and long term. 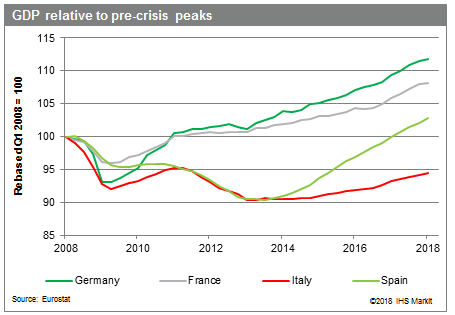 Our current baseline anticipates that the reform process in Italy is likely to be slow, and will be further delayed by recent political events. Specifically, the resignation of the reform-minded prime minister Matteo Renzi in late December 2016 was a major blow to the fragile reform consensus, which had helped to deliver the landmark Jobs Act. Furthermore, the new M5S and Lega coalition has already begun to question the effectiveness of the Jobs Act, suggesting a lack of desire to kickstart the process.

Ultimately, we continue to assume that a deeper structural overhaul in Italy will require acute financial market stress, helping to relaunch a political consensus that further action is needed to deflect intense market pressure. Still, the challenge for Italy's political elite will be to convince a wary electorate to embrace deeper supply-side reforms, accepting that they will have shorter-term negative economic consequences but will eventually deliver more positive longer-term prospects.

Banking reform likely to be slow

Our baseline scenario assumes that Italy is likely to push ahead with reforms to further open product and service markets to deliver an improved business climate. However, progress is expected to be more labored in other areas. For the banking sector, we do not envisage any rapid correction of the non-performing loan (NPL) issue; that suggests credit flows to non-financial firms will remain disrupted, remaining a major obstacle to any significant renaissance of private investment. 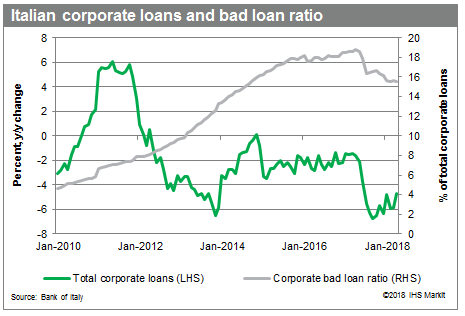 Clearly, the lack of new reform momentum in Italy is an increasing risk to medium- and long-term growth projections, and suggests that Italy could fall back further when compared to its eurozone peers.

The prospect of being trapped in a low growth environment does present a risk to Italy's membership of the euro. In addition, the electorate sent a strong message in the recent general election that Italy needs a new direction, namely a more expansive fiscal policy to generate stronger growth, and deliver more open-ended employment without watering down existing employment protection legislation. This was accompanied by demands for stricter immigration controls. In addition, the e M5S and Lega coalition's agenda of a lower tax burden and measures to alleviate poverty is proving popular with the electorate. However, without a substantial boost to growth or spending cuts elsewhere to provide adequate funding, the new measures will unsettle bond markets and rating agencies.

The uneasy alliance between M5S and Lega is likely to be a major obstacle to any immediate start of the reform process. Even more worryingly, the risk remains that some of the recent measures such as the 2015 Jobs Act could be pushed back. The best hope for a renewed reform drive is that policy conflicts pull the coalition apart, including on fiscal matters in particular, which have the potential to generate financial market turmoil. Notably, the Lega remains sensitive to any downturn in support from its wealthier constituency in the north. Indeed, if market pressure and EU resistance to expansionary fiscal policy grows markedly during 2019, this will increase the probability that the coalition government will be replaced by a unity government formed by technocrats, which could reignite the reform process.

But, given the increasing reluctance to adopt measures which are perceived as informal conditionality from the European Commission, it is likely that a serious reform drive would face severe backlash in the next general election, benefiting either the duo of Lega-M5S, or some other nascent populist movement. Italy is thus poised to remain trapped in a cycle where low growth produces populist governments, and populist governments preclude long-term reforms conducive to a stronger growth performance.