Ford Fusion moves up in the midsize car segment, despite the Asian stronghold

The domestic OEMs have lagged behind their Asian competitors in the U.S. new car market for many years. From 2009 through 2012 the domestic OEMs' combined share of the retail car market was below 28%. Last year it inched up to 28.2%, and through the first four months of 2014 it stands at 28.7% (based on IHS Automotive analysis of Polk new vehicle registration data). Although the current car offerings from GM, Ford and Chrysler are clearly superior to their predecessors in many perspectives, the car segment leaders continue to be familiar names such as: Camry, Accord, Altima, Civic and Corolla, among others.

But there is some light peeking through the clouds for the domestics. In particular, IHS Automotive data indicate that the redesigned Fusion, launched in October 2012, has made headway versus its rivals. Though the Fusion is not yet on the verge of taking over segment leadership, or even second-billing, from its rivals, the Fusion's share of the retail non-luxury midsize car segment jumped with the arrival of the redesigned 2013 version in the fall of 2012, climbing more than two points year-over-year to 10.7% in Q1 2013 (see chart below). Its share has stayed above 10% since that time, in contrast to 2012 when its share never reached that threshold. This past April, Fusion's share of segment of 10.1% was within a point of Altima's share. 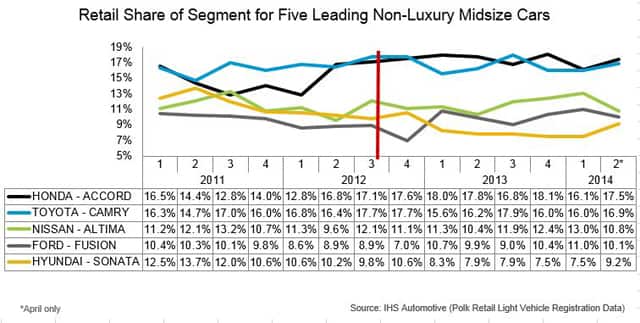 Also, Fusion's net conquest/defection ratio, measuring number of owners of competitive vehicles conquested by the Fusion versus the number of Fusion owners who defected, also increased with the introduction of the redesigned 2013 model. This metric climbed to 1.63 in Q1 2013 from 1.1 in the previous quarter and 1.54 in Q1 2012. Anything over 1 implies a net inflow of customers. Just as important, Fusion's conquest/defection ratio has been above those of all its key competitors ever since the launch of the 2013 Fusion; this suggests a greater net inflow of customers to the Fusion than to its four rivals. 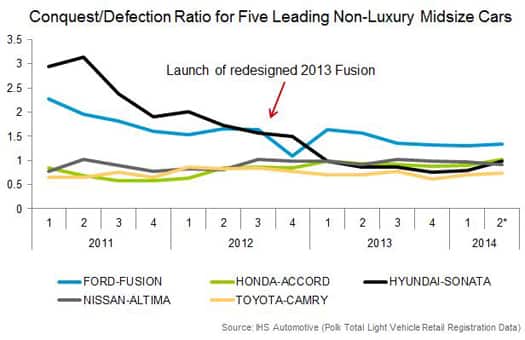 Lastly, Fusion's model-level loyalty, which measures the percentage of Fusion owners who either trade for another Fusion or add a Fusion to their household fleet, also spiked when the redesigned version arrived. Since then, though, this metric has moderated, and data for the five leading midsize models suggest no model holds an ongoing advantage on this metric.

As the retail segment share data indicate, the gap between the segment-leading Accord and Camry and the other three models is sufficiently large enough that it is doubtful either of these models will be overtaken in the near term. Nevertheless, considering the same data together with IHS Automotive loyalty data indicate Fusion is among the five segment leaders and moving in the right direction, something that could not have been said as recently as three years ago.

IHS Markit's Claudio Vittori was recently interviewed by Cu2 Consulting on the development of EVs’ components that… https://t.co/mI1npJFV72

Automotive leaders are making better use of data analytics to capitalize on the #EV market and steer investments. J… https://t.co/ONBkiRak6i

Electric vehicle (#EV) registrations in the US in 2020 reached record market share of 1.8%, demonstrating increased… https://t.co/EOf5VoNfbM