Fuel for Thought: The Chip Dip

LISTEN TO THIS PODCAST

Global light vehicle production is estimated to have been up by 15% in the first quarter of 2021 and as we reach the end of the second quarter, we expect growth of 50% against a weak comparison in 2020. As the automotive industry recovers from the pandemic it continues to be challenged by a series of supply chain constraints.

First quarter saw the emergence of a global semiconductor shortage due to capacity constraints and the lack of inventory for microcontrollers, the majority of which are sourced from one supplier in Taiwan. Next, before the quarter was out a snow/ice storm hit Texas, which shuttered chemical plants and forced raw material shortages for plastics, foams, and resins, while also forcing three semiconductor plants to shut down, further contributing to the shortage. A fire at a semiconductor manufacturer in Japan in mid-March further hampered the supply of semiconductors. Additionally, concerns around the impact of steel inventory shortages in light of surging demand from multiple industries have disrupted multiple sectors including automotive. Lastly, delays at US ports due to a surge in container deliveries are leaving automakers and suppliers wondering about transit times for their parts; the week-long Suez Canal blockage is bound to also have an impact, although it is difficult to determine the specific aspects.

As original equipment manufacturers (OEMs) and suppliers continue to evaluate the resiliency of their supply chains and inventories as well as adapting their schedules to reflect these, IHS Markit analysts have been keeping abreast of developments. 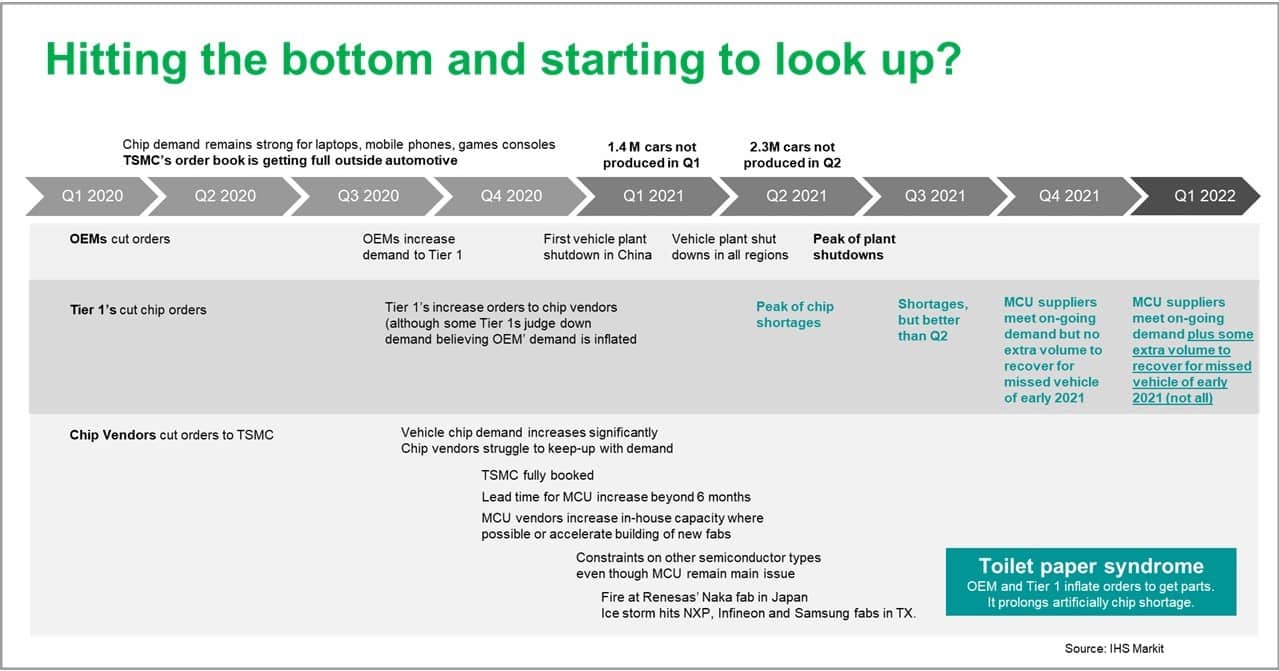 In the first quarter we started to see major disruption as it became clear that supply chains were out of sync and semiconductors were not available to support higher levels of vehicle demand. The semiconductor supplies had been moving to other industry sectors, consumer electronics, over time and vehicle demand had come back strongly after the initial disruption of COVID-19 in the first and second quarters of 2020. This strong demand was also creating an imbalance as the semiconductor supply chain was not geared up to support the level of automotive demand that was emerging. This has led to an estimated 1.4 million light vehicles not being built globally.

Moving into the second quarter the levels of disruption continued to weigh down on automotive supply chains including semiconductors. The situation from the first quarter already presented a challenge and then we saw the effects of the storms that hit Texas, spurring concerns over the ripple effect. Shortly afterward, the Fukushima earthquake in Japan, along with the fire at Renesas Naka 3 facility further dealt a blow to the supply chains. All these additional shocks happened in the first quarter, but the greatest impact was felt in the second quarter when we estimate close to 2.3 million units of light vehicle production will be lost.

It is also important from the IHS Markit point of view to note that we see additional pressure in the supply chain in second quarter as we believe that this would be the timeframe when the consumer electronics industry would be ordering products that would be shipped later in the year for sale around Black Friday, Halloween, Chinese Golden Week, and Christmas. This is a pressure point that we see compounding the situation in the second quarter but critically should be less influential over the remainder of the year.

In third quarter we expect continued disruption but not to the scale seen in the first or second quarter. Ongoing tracking has already identified stoppages are expected to account for over 250,000 units and we are not even in the third quarter yet.

We expect an improvement in the first or second quarter because the situation is becoming better understood and great efforts are being made to enhance visibility within a very complex supply chain. We see evidence of this in some of the more relaxed announcements coming from General Motors (GM) starting back operations earlier than initially planned and Toyota's ongoing commitment to its planning. In Toyota's case we know that they have been monitoring supply chains for over 10 years since the Fukushima earthquake/tsunami in 2011, while GM has been focused on improving its understanding of the situation since January and we may now be seeing some results. However, there are still mixed signals and it is too early to sound the all-clear.

Other OEMs are implanting similar efforts and while this can only provide limited support, we take this alongside restoration of semiconductor capacity at Renesas in Japan, plus NXP and Infineon in Texas to ease levels of disruption over what we have seen so far this year. Note again that we are only expecting capacity to be restored to prior levels and do not expect a build-back effect to take place.

For the final quarter we are expecting the supply of semiconductors to align to a 'reasonable' level of automotive demand. We stress reasonable as automakers and tier-1 suppliers will not achieve a reasonable level if they communicate exaggerated or overly ambitious levels of demand for semiconductors. Without any major capacity gains, one of the best ways to reduce the kind of disruption we see now would be to align available capacity to realistic planning volumes.

We are not expecting a significant constraint to emerge from the consumer electronics sector in the fourth quarter of 2021. This is partly due to our understanding of the timelines within the supply chain and partly also because some of the drivers in 2020 are unlikely to be repeated quickly—the sharp shift to remote working and the need to be connected, the spikes in demand as the world recovered from the shock of the first wave of the pandemic, and the launch of major gaming consoles from Sony and Microsoft, including the launch of a new iPhone. Based on this, real recovery efforts would only start in early 2022.

Much of the impact on new vehicle sales remains to be seen at this stage, as inventory levels remain healthy enough to meet today's demand. As time goes on, the availability of high volume, popular vehicles may be an issue in larger markets.

On 15 February, NXP's, Infineon's, and Samsung's fabrications in and around Austin, TX were forced to shut down owing to a winter storm that disrupted power and water supplies. Outputs at all fabrications are back or close to pre-shutdown levels.

The recent fire in the 300 mm cleanroom at Renesas' Naka fabrication in Japan impacted a small area of the fabrication but it damaged water supply, air conditioning, and manufacturing equipment. In its 1 June update Renesas reported the output was 88% of the production before the fire and that it is targeting a 100% by mid-June. Likewise, NXP announced in April that its Austin fabrications are back to 100% pre-storm levels.

While the shutdowns in Texas and Naka are known issues, there is a potential issue looming in the near future worth highlighting. Taiwan is experiencing its worst drought in decades. Making semiconductors requires large amounts of ultra-pure water. A water shortage in the region means less available water for all activities. While TSMC and UMC are able to recycle over 85% of their water, additional water is required, on the order of tens of millions of gallons/day. Reservoirs are holding only about 10% of their capacities. Given that TSMC and Intel are exploring fab expansions in Arizona, a significant portion of Arizona water come from the Colorado River and the snowpack in Colorado in 2021 was slightly below average. Water security is important for all fabrications in the near and long term.

The other unknown issue is there have been some new COVID-19 outbreaks that have limited workforces at wafer fabrications and assembly locations. If these are sporadic the impact should be minimal and short term. However, the rise of new strains especially in regions with limited vaccines continues to threaten the availability of semiconductors.

However, the current tight supply chain, along with disruptions to non-automotive markets impacts the automotive sector. The automotive suppliers of semiconductor-content impacted by shortages are expected to improve in the second quarter, and by third quarter able to meet ongoing demand, with a likely slippage by a quarter, with fourth quarter now looking like the first opportunity for supply to keep up with demand. However, IHS Markit estimates it will be first quarter of 2022 before there will be enough capacity to keep up with demand and to begin filling missed backlog.

In response to the disruptions of 2021 the semiconductor suppliers are extending the fixed order window from 12 weeks previously to a year or more now. Some minor adjustments are allowed but orders are becoming noncancelable/nonreturnable, which means even if the demand decreases the customer is responsible for the value of the entire order. These conditions are being applied to all semiconductors not just MCUs. The level of confidence in the actual demand for semiconductors is one of the reasons for these conditions, if the demand is real some see tight demand continuing through 2022 until new front-end and back-end capacity is in place. If the demand is exaggerated conditions could relax sooner once the demand returns to more normal levels and the systems are transparent enough for all to rationalize the demand.

Listen to this week's episode of Autology - our new weekly podcast

Ask Phil Amsrud a question on E/E and Semiconductors

Prepare for the unexpected with LV Contingency Forecasts

Attempting to understand the core, underlying drivers of the US new vehicle industry can be challenging. In a new w… https://t.co/VuSwYwE2fI

For the first time, more car owners moved to utility than another car. In 2021, 47% of car households acquired a ut… https://t.co/GcD4YCPvUT