From hope to frustration

A sense of hope emerged for many Mexicans when Andrés Manuel López Obrador (AMLO) won the presidential election in July 2018. However, on 29 October 2018, reality set in for investors. Only a month prior to taking office, AMLO announced the cancellation of a new US$13 billion airport for Mexico City, which was under construction, sending warning signals throughout the international business community that investments were at risk. Since then, AMLO cancelled all future upstream oil industry farmouts, falling back to an era in which international investment is limited to service contracts, allowing the government to have more control. Additionally, AMLO's actions have redirected Pemex toward its nationalistic tendencies by forcing increased refinery runs using locally produced crude instead of importing products from the United States. As a result, Mexico has not been able to take full advantage of a tight market for heavy, sour crude oil caused in part by the halt of Venezuelan supply to the US Gulf Coast (USGC). This outcome has meant sacrificing economic gains in favor of political ideology. Mexican crude oil production has continued to decline from 1.73 MMb/d in December 2018, when AMLO took office, to 1.70 MMb/d in July 2019. This decline was largely caused by the decrease in production from the Ku-Maloob-Zaap (KMZ) complex, Mexico's most productive asset since 2009, which declined 16,400 b/d in the same period. Because of the decline in production of lighter crude grades Isthmus and Olmeca, a hard stop on light crude exports occurred in the first half of 2018. Furthermore, Mexico's refining sector is mostly configured to run light crudes. With the decrease in light crude and severe maintenance issues, Mexico's refinery runs teetered around a utilization rate of just 40% utilization in July.

Maya heavy crude production declined from 1.07 MMb/d in 2018 to 1.06 MMb/d in 2019 year to date. Comparing the first half of 2018 to the first half of 2019, it is evident that the trend in exports has shifted from the United States to Asia, with an 7% decrease and a 35% increase, respectively. The Maya Louisiana Light Sweet-(LLS) spread narrowed to a $0.08/bbl discount in November 2018 as Canadian bottlenecks increased Maya attractiveness, but the price has since stabilized ahead of International Maritime Organization (IMO) 2020. In an attempt to showcase a positive outlook for Pemex's production and finances, on 16 July 2019, the state-owned company released its business plan for 2019-23, which highlights a reduction in the profit sharing tax from 65% to 54% in 2021. While the tax reduction will allow the national oil company (NOC) to invest more into upstream production, the decision cannot be decided by Pemex, but rather by the Ministry of Finance and Public Credit. The plan also estimates that production will reach 2.7 MMb/d by 2024 by focusing investments in onshore and shallow-water fields. There are no signposts about the possibility of additional farm-outs, which are viewed as necessary to reversing production declines. 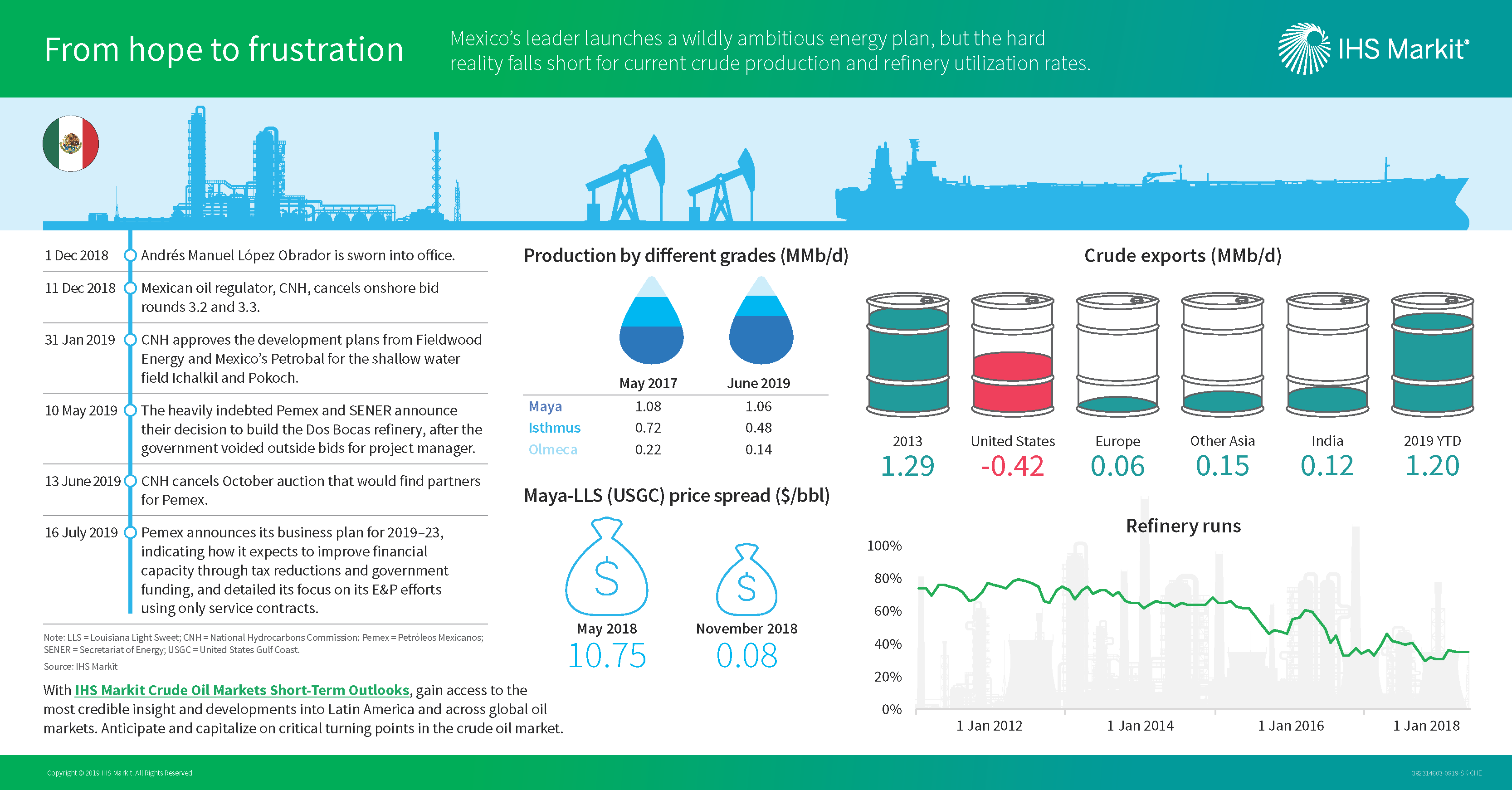 You may also be interested in some of our additional Latin America focused research and analysis: