From fumes to neural networks: Moving beyond the limits of conventional forecasting

The Oracle of Delphi in ancient Greece was renowned for predictions and insights. Such prowess probably did not come from the intoxicating fumes inhaled by the priestess, but from Delphi's role as a node for connecting and exchanging information in the ancient Mediterranean world. In other words, Delphi was an early "neural network" that collected and, in its way, analyzed vast amounts of information. Computerized 21st-century neural networks operate differently, but they share a common feature with Delphi — the capability to gather, analyze, and learn from large amounts of information.

Over the past year IHS Markit has developed, tested, and begun using advanced analytics in the form of neural networks to assist with predicting commodity prices and economic and financial market variables. Neural networks circumvent traditional econometric modeling by making no assumptions on underlying dynamics. They assess non-linear relationships, filter "noisy" data, and can ingest structured time-series data and unstructured text.

We initially called our effort "Project Wildcat" — borrowing the oil industry term for drilling an exploratory well in new territory. When we started, we did not know what we would find. As our work progressed, we discovered a new highvalue tool that charts cause and effect and helps to narrow the range of oil price outcomes.

Human intelligence finds it challenging to predict oil prices. Has our neural network model unlocked the mysteries of oil price movements? First, no tool or algorithm exists that can consistently, precisely, and accurately predict oil prices — or any other macroeconomic or financial market variable. Indeed, if a "magic algorithm" was discovered, its success would be short-lived, as markets and the punters who play in them would adjust and the market itself would change. Like a successful new business or sports strategy, it would be widely copied and its advantage eroded away.

The power of today's advanced analytics is more enduring than an ephemeral magic algorithm because of the ability to provide perspectives on dynamic variables in fast-changing markets. The neural network helps to frame possible outcomes and highlight the potential impact of highly uncertain variables. This is done by analyzing mind-boggling volumes of data that far exceed the capacity of traditional analytical exercises. For example, changes in the value of the US dollar are, at times, a focal point for oil price movements. But not always. Our neural network helps us to better
evaluate when the dollar is "on" or "off" as a key factor. And our neural network itself is not static. We learn, adjust, and improve it over time.

After our initial efforts and considering the discoveries we made, we changed Wildcat's name to DeepSeq — with the "Seq," short for deep sequencing, pronounced as "seek." DeepSeq does not provide a singular "right" answer, but it provides an emotionally detached set of projections based on probabilistic decision trees. It pays no heed to the hierarchy of corporate decision - making or biases about how the market should behave — or how we would like it to behave. If you want a virtual "straight talker" to provide input, DeepSeq fits the bill.

Our experience with DeepSeq also highlights the importance of training, selecting insightful data sets (which we call cases), and the value of judgment.

First, a neural network like DeepSeq needs to be properly trained — also referred to as learning. This is very different from people training — no corporate "on-boarding" sessions required. Instead, a lot of quality data is needed.

DeepSeq can be trained to predict prices and values of many things — pork bellies, the S&P 500 index, or gasoline demand. We focused our efforts on the price of Brent crude oil. DeepSeq, via our data lake, was fed a wide array of historical macroeconomic and oil industry data in different combinations that spanned varying periods of time going back 18 years. It then "predicted" historical prices for a different period of time using what it learned. For example, DeepSeq would train on different sets of data covering 2002 to 2017 and then predict prices for 2018 and 2019. The accuracy of the predictions for each case was readily ascertained by comparing the tool's predictions to actual prices for 2018 and 2019.

This work led to our second key learning: the importance of selecting the most effective cases — or datasets — to run. Indeed, there were some cases that we initially thought would be very good at predicting prices, but then they fared poorly at times. It was this process where we—the human users of DeepSeq — learned to identify which cases were most insightful and under what conditions. For example, a particular case, such as oil inventory data or futures market time spreads, may prove to be a good predictor of Brent prices at some times, but it is less effective at other times.

The promise of deep neural networks like DeepSeq is to provide insight into the future. This is how we learned a third key lesson: Human interpretation and understanding are essential complements to making use of the high-powered analytics of DeepSeq. DeepSeq "joined" our oil market team late last year. Depending on the specific purpose at hand, we ask DeepSeq to predict oil prices across a range of cases. The timeframe for predictions ranges from five to 60 trading days and the number of cases currently ranges from six to 12.

We have found that the more experience we have with DeepSeq, the better we are able to use it. This is mainly because each month we add more actual results, which gives us a stronger foundation to evaluate and understand the various cases DeepSeq runs. Put another way, the more "games" we play with DeepSeq, the more effectively we understand the conditions that make certain cases better predictors than other cases. And our advanced analytics team continues to make improvements to DeepSeq. 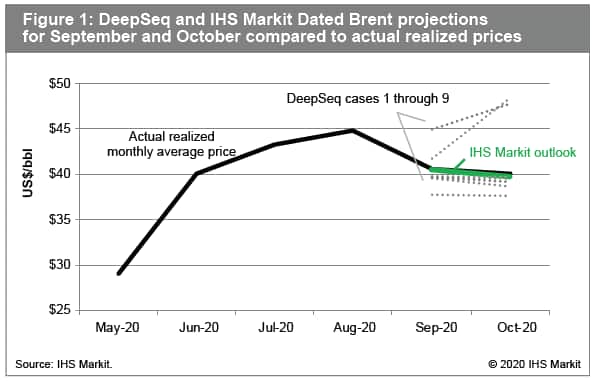 Figure 1 shows September and October Dated Brent price projections for nine DeepSeq cases, the IHS Markit outlook, and actual prices. The projections and actual prices are calendar month averages created in early September. September proved to be a pivot point for oil prices, but it was not clear at the time. Monthly average Dated Brent crude oil prices had risen from $18.57 per barrel (bbl) in April to nearly $45/bbl in August. Would prices continue to rise in September? DeepSeq helped to frame potential outcomes. Of the nine cases, seven projected September and October prices that would fall by $3/bbl to $7/bbl below the August level. Two cases showed prices continuing to rise. This was a clear signal from DeepSeq — seven of nine cases showing much lower prices than in August. Ultimately our price projections for September and October were near actual prices as shown in Figure 1 — and DeepSeq was an important factor in our price call.

So, what is the bottom line on our use of DeepSeq? It has proven effective at framing and narrowing a range of oil price outcomes, a particularly valuable asset in volatile and complex markets such as oil. Having a virtual partner on our team with no preconceived biases or expectations about the future is a big help. The Oracle of Delphi could have only wished for such a tool.