Two weeks ago, Capesize freight forecast models showed strong near-term bullish signals on Brazilian routes for Feb/March 2022. At the same time, the freight market was still on a downward trend owing to negative news and sentiment resulting in the weakness in Capesize freight rates. The weekly average of the Baltic Exchange Capesize Time Charter Rates (24-28 Jan 2022) was at USD 6,928 per day when IHS Markit models generated the forecast of the C5TC predicting a rate about 20% higher than FFA assessment for February and March 2022 contract.

Although the freight market could not avoid correction with seasonality of the first quarter (Lunar new year holidays in Asia and several weather issues), we have consistently argued in previous commentaries that overall dry bulk fundamentals still look fairly positive and ongoing strength in the container market will continue to support minor bulk trade. Moreover, rising sentiment for a post-Winter Olympic Games recovery in industrial production has spurred on industry related commodities including iron ore and coal prices.

In fact, market consensus for the overall freight market has been quite bullish even with the significant decline in freight rates over the first 4 weeks of this year. The positive sentiment was reflected in a resilient period market and the FFA curve in contango. Key questions were about (a) when market will rebound (b) how much it would go up (c) how long the strength will continue. To answer those questions, it is necessary to quantify the story into signals.

In early January, heavy rains caused a number of mine stoppages in Brazil and put first-quarter iron ore shipments into question. According to IHS Markit Coal Metals & Mining (CMM) group, Vale halted train services on the EFVM railway and halted production from the Brucutu and Mariana complexes in its Southeastern system as well as all mines in the company's southern system. These operations together accounted for approximately 30% of Vale's production in 2021. The disruption-related reduced iron ore shipments from Brazil was the main factor behind the weakness in Brazilian freight rates. Therefore, the recovery in Brazilian iron ore shipments will be the key driver for additional Capesize tonnage requirements. It is clear that the resumption of mining activities is expected if weather conditions permit but there is no definitive timeline given. Therefore, many market participants tried to figure out the level of port stocks, specifically from Tubarao ports, an indicator of the mining operation recovery pace in the southern system.

The port Tubarao iron ore port stock level (pictured on 27 January 2022) finally showed the recovery after touching the bottom of observed period in previous weeks. Indeed, we observed shipments followed the recovery as can be seen in the snapshots below. 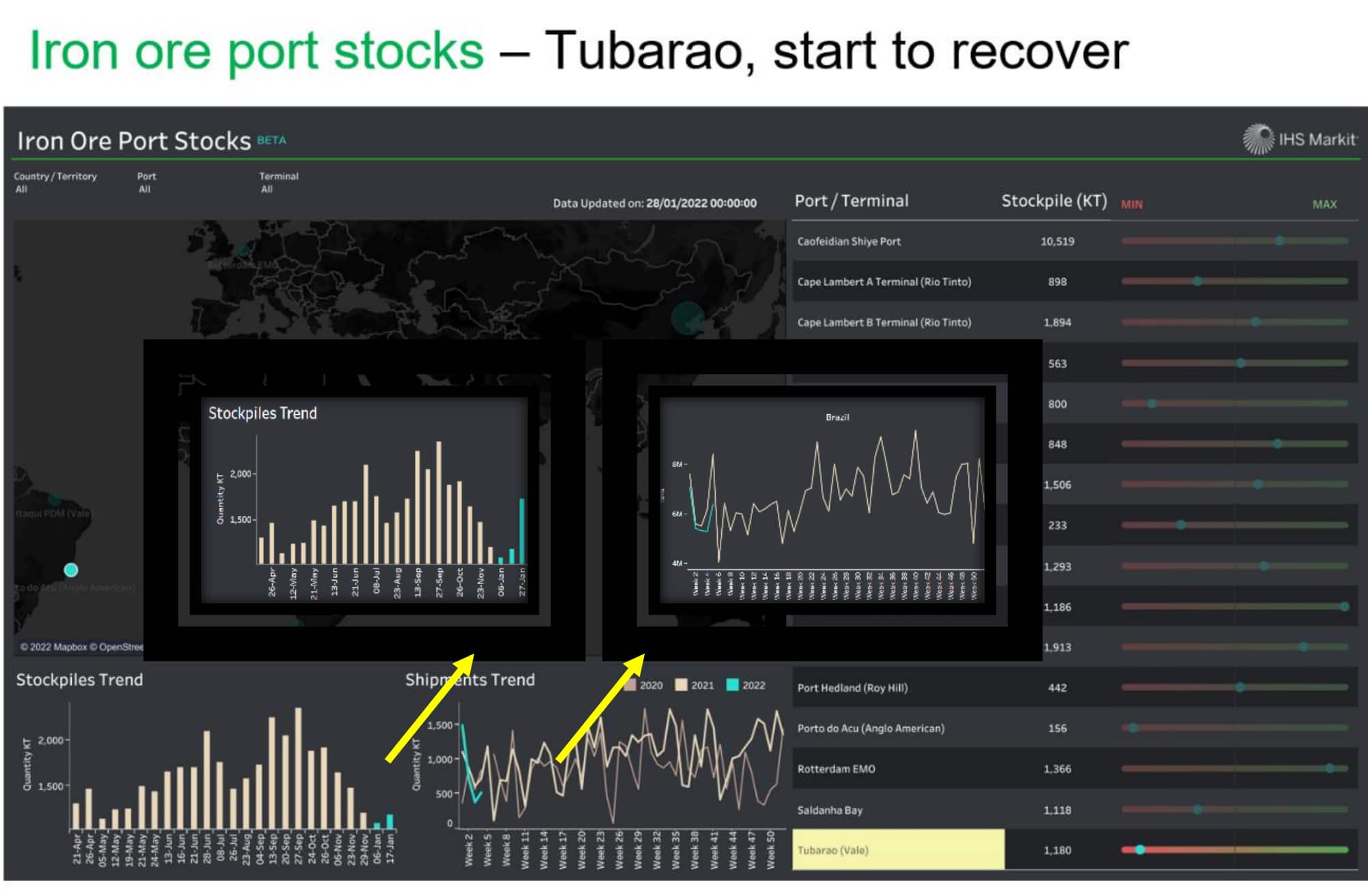 C3/C14 Brazil routes supply. With news of disruption in Brazilian iron ore shipments, and expectation of recovery in the freight market after the Chinese Lunar New Year, shipowners have been extremely reluctant to lock their vessels with longer-duration voyages with reduced rates. Therefore, we have observed the number of ballasters remained extremely low; 23.24 million deadweight (dwt) capacity heading to Brazil, or total 91 Capesize vessels including 56 vessels from mainland China, 7 vessels from India, and 6 vessels from Malaysia (as of 28 January 2022) compared with average about 130 Capesize ballasters heading to Brazil in February 2021. 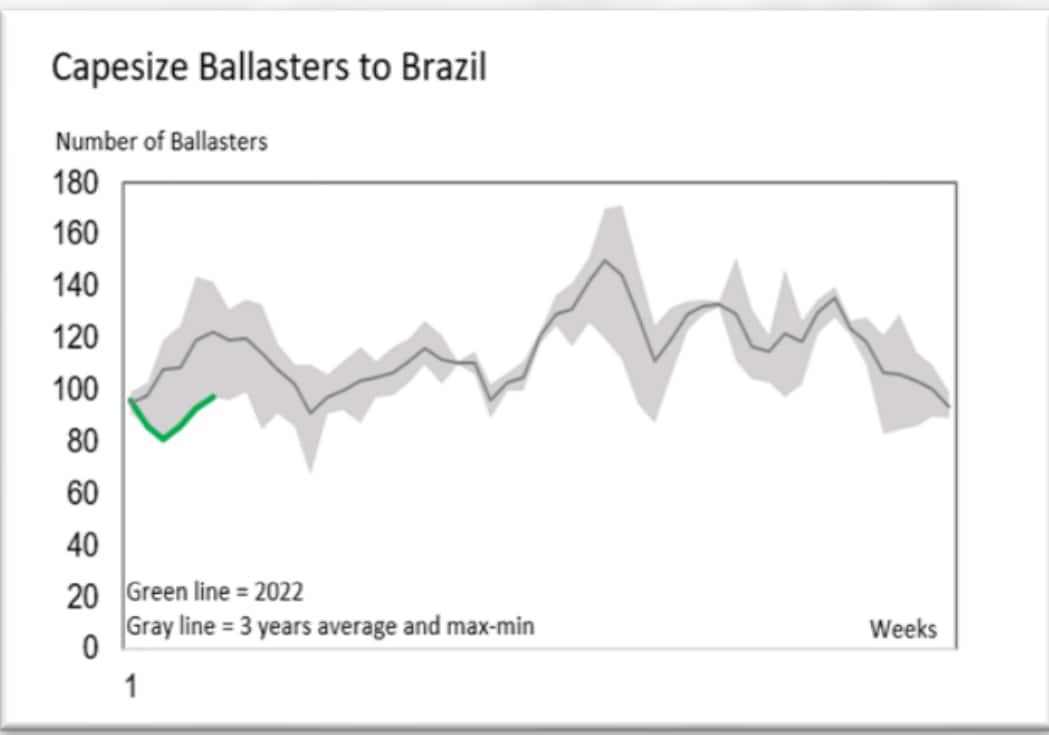 If mining activity indeed rebounds according to signals from iron ore port stocks above, Brazil rates (C3/C14) need to bid higher or at least match the market expectation based on FFA March-April contract to attract vessels towards Brazil in two to three weeks. If ballasting capacity requirements follow the seasonal pattern of previous years, about 40-50 more ballasters are required to meet Brazilian iron ore demand in the coming four weeks, indicating potential spike in Capesize freight rates in the near-term. Baltic Exchange Capesize TC average has already increased above USD 15,000 per day as of writing (10 Feb 2022) and we expect the momentum continues in the coming weeks. 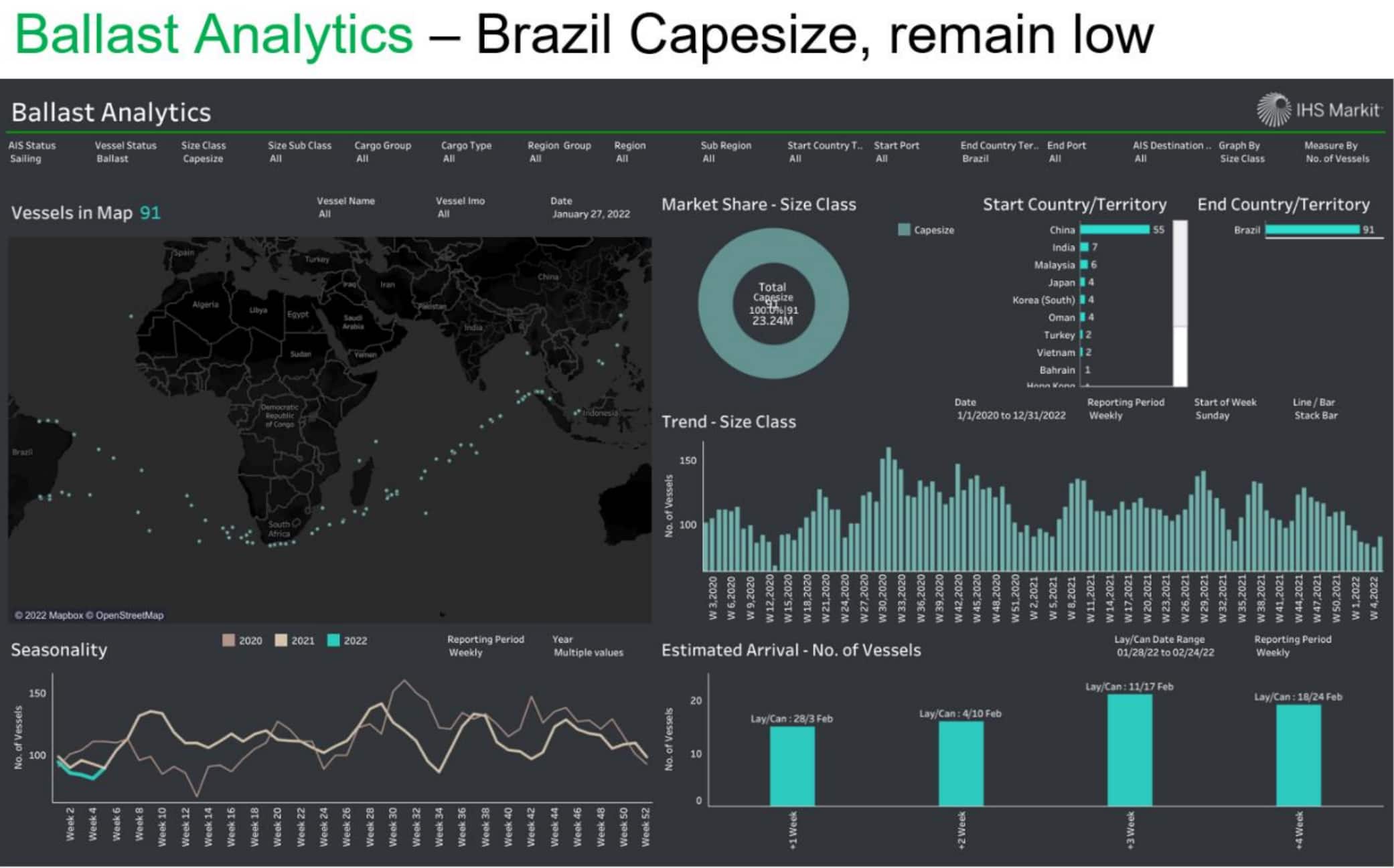 Traditionally dry bulk freight rates have been supported from the top down, Capesize supporting Panamax and Panamax supporting Supramax/Handy sizes. However, unlike the previous years the strong performance in the minor bulk trade has resulted in supporting the larger vessel classes from the bottom to top. 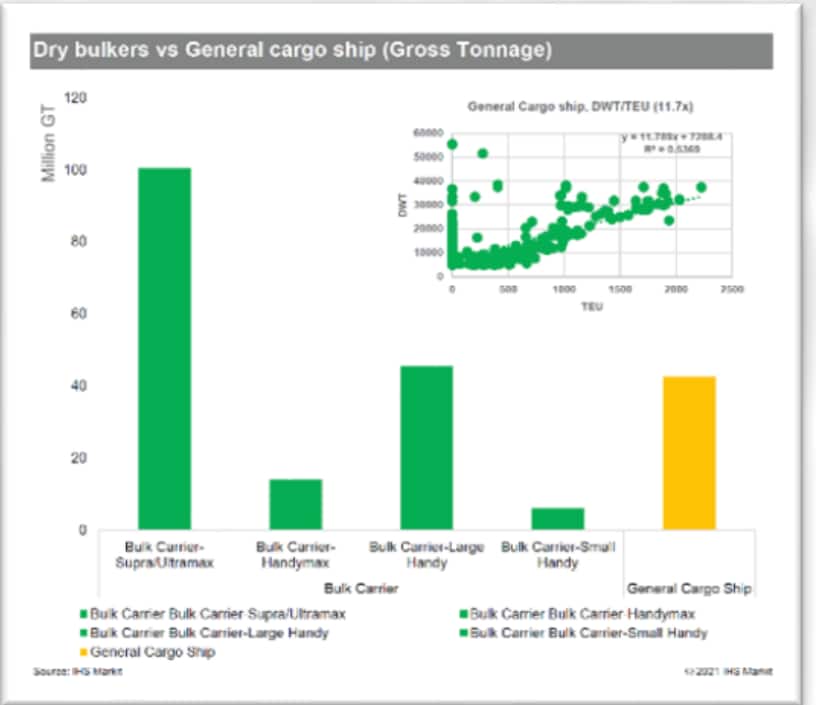 According to IHS Markit's JOC.com, the volume of containerized cargo arriving in the United States on non-container ships jumped 42% y/y to 206,013 TEU during the first nine months of 2021. Within this category, general cargo ships were the busiest, delivering 98,130 TEU to U.S. ports from January through September, up 82% from the same period in 2020 and 65% from 2019, before the COVID-19 pandemic.

Therefore, we have consistently argued that as long as container rates remain high enough to capture part of general bulkers and open hatch cargo vessels in the container sector commercially, geared bulker rates are expected to be supported, and again this will support Panamax and Capesize sectors through shared cargo including coal and iron ore. Based on a record high backlog and limited newbuilding delivery schedule in 2022, IHS Markit believes that container rates are likely to remain high until at least the first half of 2022 albeit lower than 2021.

With continued strength in the container market, we expect many geared bulkers will stay in the container sector, which practically reduces fleet supply and makes them outperform other size sectors and support our bullish view for the early part of 2022. However, potential downside risk remains towards the end of the year as a transition from pandemic to endemic COVID-19, the shift from fiscal policy stimulus to restrain rising interest rates and tightening credit conditions, a gradual shift back to a normal balance in consumer spending between goods and service will eventually reduce trade volume. But ongoing turbulence from the COVID-19 pandemic delay the normalization. Transition will happen but not likely until late in the year.