On 8 August, the Mozambique government announced that Rwandan troops had retaken control of Mocímboa da Praia, a coastal town with a port and airstrip that the insurgents had been using as a base and probably as a trade and supply route since seizing it on 11 August 2020. In the past month, to counter this insurgency, an estimated total of 3,300 to 4,000 troops have been deployed in the country by Angola, Botswana, Lesotho, Malawi, Rwanda, South Africa, Tanzania, and Zimbabwe, as well as small contingents from Portugal and the United States for training. The South African navy's SAS Makhanda offshore patrol vessel, docked at Pemba port, is part of a small maritime contingent including ships from Rwanda and Tanzania.

Rwanda has taken a more aggressive stance than other countries, with its forces retaking from insurgents and holding the city of Awasse on 27 July, Mocímboa da Praia on 8 August, and reportedly heading to Macomia, Cabo Delgado. The other countries' militaries and governments have been in discussions on organizing as a Southern African Development Community standby force (SADC-SF), but the command structure remains undefined.

The Rwandan troops will very likely be able to secure a limited area within Mozambique's north-eastern Cabo Delgado province. However, it is unlikely that the 1,000 Rwandan soldiers will be able to secure a wider perimeter due to the focused nature of their offensive operations. If the SADC-SF achieves enough coordination to provide support to Rwandan troops, the insurgency is likely to lose its current level of territorial control of the northeast of Mozambique and to be reduced to carrying out hit-and-run attacks. Such support from the SADC-SF would probably include ensuring a month-long presence in key cities, performing regular patrols on the province's roads, providing intelligence, surveillance and reconnaissance (ISR) capabilities and airpower (attack helicopters). The insurgents will very likely fully withdraw from Palma, Mocímboa da Praia, Macomia, and Muidumbe districts in Cabo Delgado province. 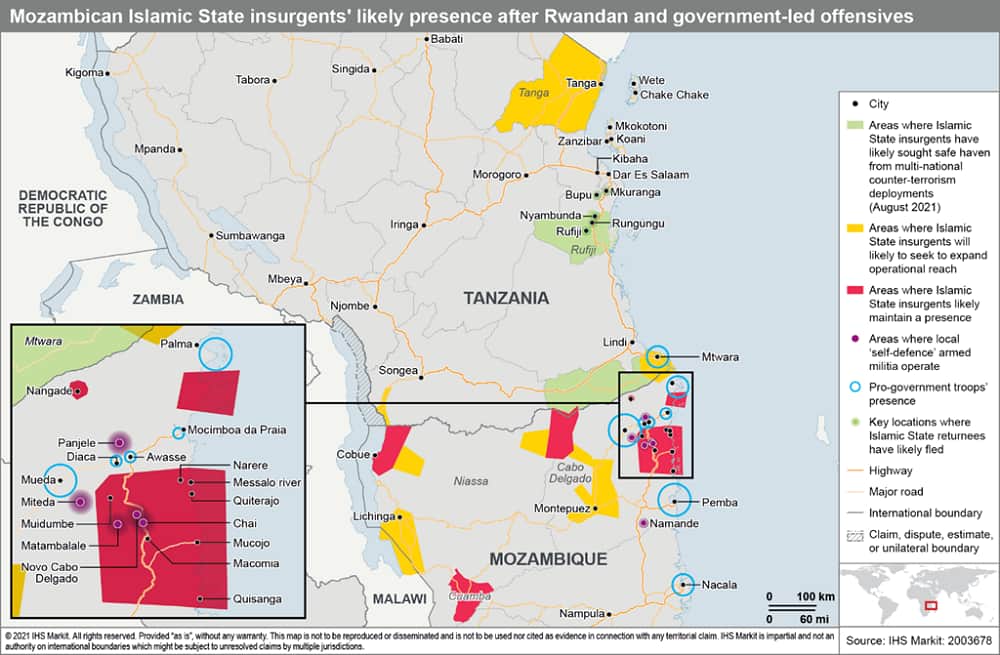 IHS Markit assesses that, facing the Rwandan forces' assault, the insurgency has split into small semi-independent groups led by Mozambican community leaders in Cabo Delgado and Niassa provinces (see map). The leaders, identified by the US Department of State on 6 August and by the Observatorio do Meio Rural on 10 August, are reportedly from Palma, Mocímboa da Praia, Macomia, Lichinga. It is increasingly likely that insurgent commanders will retreat to familiar ground as well as heavily wooded areas, including Niassa province. The likely dispersal of the group poses a very high risk of small arms attack and kidnapping to locals refusing to sustain or give shelter to the insurgents, all government staff, and to all foreigners. Within several weeks, once insurgents have established themselves in new areas, schools, churches, government buildings and investments associated with the government will very likely be targeted with arson, grenades, and small arms. Near the Messalo river and Macomia, the insurgent group will very likely attempt to ambush mobile and isolated government-aligned forces, Rwandan and SADC-SF and eventually seek to develop crude IEDs in these attacks. However, the insurgents are likely to be deterred from staging a large-scale assault on a city, due to their need to defend against the arriving foreign forces. With the loss of territorial control of the north-eastern coast of Cabo Delgado, insurgents have lost a significant source of their revenues comprising smuggling, human trafficking and drugs trafficking using sea routes. It is therefore likely that the group will seek to take over small legal and illegal mines to make up for the loss of revenue over the next three-six months.

IHS Markit sources reported that small groups of Tanzanian members of the insurgency have traveled back to Tanzania (see map), probably having retreated and returned to their homes there Insurgents in Tanzania are likely to face a very effective security response. Tanzanian Inspector General of Police Simon Sirro stated publicly that insurgents in Kibiti region would face the same "fire" that drove them out before, referring to security operations in 2017, when arrests and disappearances of young men suspected of involvement in the killing of security forces' personnel and ruling party officials were commonplace. Moreover, all settlements within 40km of Mtwara town near Tanzania's border with Mozambique have reportedly set up community checkpoints at which travelers will be arrested unless they provide identification documents and a valid reason to travel.

Insurgents' tactic of avoiding confrontation with the armies will likely lead to quick claims of victory by the government-aligned forces. Unless the SADC-SF secures external funding, it is unlikely to be able to sustain itself beyond six months, which, combined with a perceived quick victory, is likely to lead to the withdrawal of the SADC-SF in early 2022. However, the insurgency's social roots will most probably remain unaddressed, leading to the threat reappearing in the future.