new design at the 2011 LA Auto Show - with yet another social media campaign. This one follows the road-trip soul of the Focus Rally, but throws a twist on it. Dubbed 'Escape Routes,' this campaign will feature six two-person teams that compete from city-to-city by driving around for clues, figuring out mental/active challenges and flexing their social media interaction prowess. Next spring, these teams will help spread the word about the positives (and not so positives) about the new Ford Escape, by competing in spontaneous, adventurous and interactive social games.

Why not continue using a social media heavy strategy to promote new vehicle launches? It seems to be working like a charm. Ford has been increasing market share, and more importantly, their most recent two vehicle launches to use social interactivity as promotional tools (Focus & Fiesta) have sold like hotcakes. 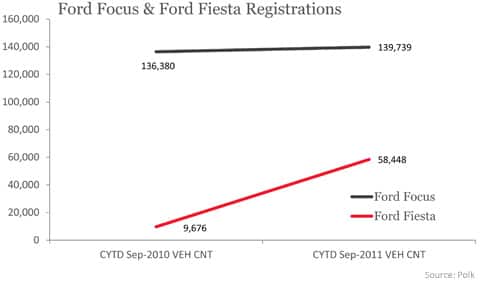 The Fiesta Movement was particularly interesting, since Ford was bringing back a nameplate with low, to no, brand cache or awareness. The Fiesta Movement changed all that, and by the time Fiestas were in stores in late summer, Ford came out of the gate with better than 4,800 retail registrations per month. The 2011 current year-to-date numbers for September show that nearly 6,500 retail units are registered monthly for this model. That's a 25+% increase. Last summer, the Fiesta Movement took the social media world by storm. Online, you could see the avidity of support for teams in various cities exploding into waves of social impressions and content. It obviously translated into sales for Ford.

The Focus Rally took a performing but boring model and updated it to current cool status, with its road-trip themed social promotion. Already, after only a few months of availability, registrations are up 2.5% year-over-year. I predict next year, the Focus becomes Ford's volume seller and part of the reason is the Rally's effect on brand perception.

Say what you will about social media, but it is proving to be a channel for brands to better connect, engage and ultimately sell themselves to their consumers. The live online video stream of a non-paid spokesperson driving a Focus across country, while interacting with their online friends and fans is like the reality television of advertising - it's a joke until you catch yourself watching it completely enthralled. Smart advertisers have capitalized on what I've dubbed the "Viral Vehicle Launch" and have certainly helped drive inquiry and sales in a tough environment for big ticket item commerce.