We have reached the end of the third quarter for 2011 and Ford Motor Company of Canada, Limited is still the sales leader in the country. In fact, the company is reporting its highest sales in 20 years. Ford moved up the sales rankings from third to second place in 2009 and then took over the top spot from General Motors in 2010. Ford looks unstoppable and while growth this year won't be at the same level as the peak of 19.6% between 2009 and 2010 (previous high was 10.1% between 2005 and 2006), they are tracking at a strong 6.8% growth rate. 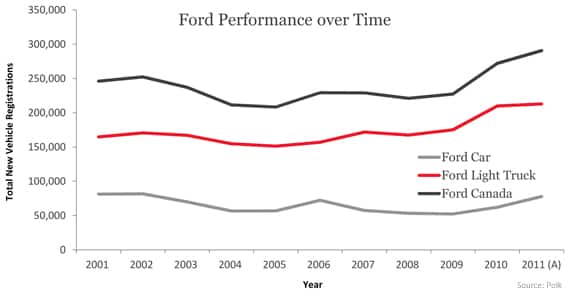 Light truck sales have remained the higher volume segment for Ford, but the company's cars have shown strong growth, especially compared to industry standards. While overall car sales declined 5% between 2009 and 2010, Ford's car sales rose 19%. For 2011, Ford's car sales are expected to increase 25% vs. the overall industry's growth of 3%.

Looking at Ford's sales from a geographical perspective, you might ask, "Has Ford's performance and strong growth been consistent across Canada?" Though Ford's growth was consistently above the industry's growth between 2009 and 2010, there are some provinces where the growth was significantly higher.

In Eastern Canada, Ford's growth in Prince Edward Island (32% - highest percentage change) and New Brunswick (23%) were more than one and a half times that of the industry. Ford was also strong in the centre of the country with growth rates three to four times that of the industry average in Quebec (26% vs. 6%), Ontario (22% vs. 7%) and Manitoba (22% vs. 5%). Moving further west, Ford still has registered good growth, but it fell closer to the industry average in Saskatchewan (7% vs. 5%) and Alberta (19% vs. 11%). This performance is partly a reflection of the larger truck market in Alberta (71% of industry) and Saskatchewan (73% of industry) and Ford's lower growth rate with trucks. Though British Columbia represented the third lowest growth rate for Ford (10%), this was still strong compared to the flat industry average (0%).

While Ford has been increasing its sales volume, the number of their dealerships has been declining. Over the last 11 years, the number of Ford dealers has declined from 526 to 433, an 18% decrease.

In fact, Ford did not go through the same dealership purge in 2009 that other domestic OEMs did; however, they have been rationalizing their dealer count over the longer term which has helped ensure healthy dealers. Ford's largest decline in their number of dealers occurred through the beginning of a 10-year period (15% between 2001 and 2007) with the amount of change flattening out over the last three years. Their strong sales growth has meant a much higher throughput (Ford registrations/number of Ford dealers) to dealers. From a low of 443 in 2005 and 2006 to a high of 627 in 2010, this is a 41% increase in throughput. This level of throughput is much higher than the other domestics (GM - 564 and Chrysler - 483) and in line with import OEMs (Toyota - 661). In this age of rising costs and declining dealer margins per car, this has improved the chance of Ford dealers remaining profitable.