Editor's note: This new blog is from our regular contributor David Hsieh, who was recently named IHS Markit Technology Fellow—one of only 11 titles awarded by the company in recognition of our most respected and experienced analysts.

At the recent MWC 2019, a conference dedicated to mobile technologies, attendees had a chance to glimpse foldable displays in a number of exhibits. According to analysis from the AMOLED & Flexible Display Intelligence Service, the foldable display could well rejuvenate the display industry—thanks to its revolutionary form factor and a superior picture performance delivered by OLED technology. Even so, the potential of foldables to revive the display space is likely to bring about disruptive changes, especially to the market for smart handheld devices.

Various types of foldable displays have been developed to date. A list of these devices can be found in the IHS Markit report, Samsung and Huawei Foldable Displays - Special Report - 2019. Overall, several players—including the likes of South Korean giants Samsung Display and LG Display, China's BOE and Visionox, and Taiwan's AUO—are all working currently on their own versions of the foldable display. Each brand has its own concept and unique specifications to match, most notably in thickness and bending radius—two key variables for improving mobility in foldable displays.

Most current developments on the foldable display have chosen to focus on a form factor combining that of a smartphone and a tablet PC. Yet display makers are not in a hurry to launch foldable displays for the end-market because of formidable production challenges, says the IHS Markit Display Dynamics insight article, Will foldable OLED displays arrive in 2018?

The reasons are many, as can be gleaned from the discussion below.

Ultra-thin but robust display structure
To achieve the "foldable" feature for displays, the display technology deployed must be flexible OLED. This is because LCD—the traditional technology utilized for display panels in general—cannot be applied to a foldable display's flexible substrate.

Moreover, the material for the display substrate in foldables must be polyimide—a film-like polymer with high heat resistance—instead of glass, the conventional component in non-foldable panels. And for smartphone applications, a foldable touch panel and robust cover window are necessary.

On top of these requirements, the entire display structure—consisting of the display and touch module—must possess a thickness level measuring less than 1.0 mm and accommodate a bending radius of 1.5 mm. Given the numerous semiconductors, transistors, chemical layers, and optical film layers that are placed on the top of the display substrate, each layer must be extremely thin so that the total thickness comes out to less than 1.0 mm. This, indeed, poses a major challenge to display design capabilities, since consumers are not interested in thick foldable displays.

Design and structure also matter. Foldable displays from Samsung devices are thinner because Samsung uses a so-called "in-fold" design. Meanwhile, an "out-fold" design makes foldable displays thicker from Samsung competitor Royole—a company with sales and marketing offices in North America and Europe, and has manufacturing sites in China. Of the two, Samsung's "in-fold" design is harder to manufacture. Analysis on this topic can be found in two Display Dynamics articles,Foldable OLED display prototypes from BOE, LG Display, and Samsung Display, and Royole announces foldable smartphone FlexPai with self-supplied AMOLED.

New materials for foldable OLED and touch cover panels
Foldable displays also need to be reliable, requiring new materials for the display as well as for the foldable touch panel. These new materials are the colorless polyimide and hard coat for covering and strengthening the cover window that protects the display; the multi-buffer and cushion for improved flexibility; and the specialized TFT in the backplane for greater reliability.

The figure below shows the characteristics of these new materials. 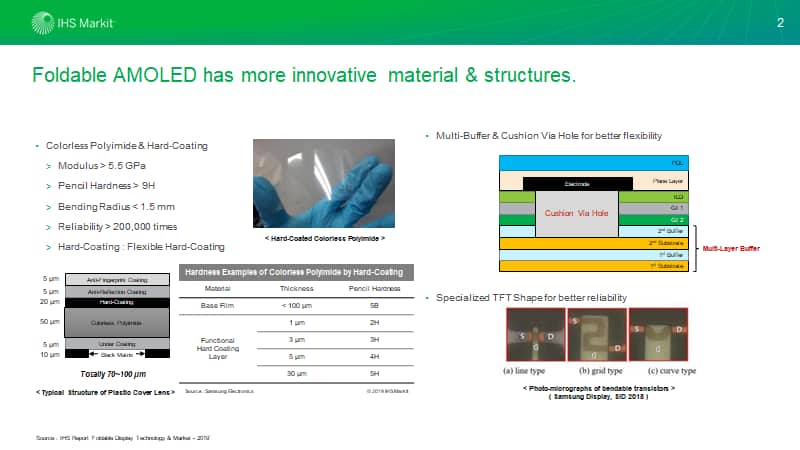 Among display manufacturers, the yield rate of Samsung Display may be superior to that of its competitors given Samsung's experience in the process and in equipment overall. Other display makers, lacking Samsung's advantages, will have a difficult time matching the South Korean giant's production yield.

For displays, reliability is indicated by the number of times the screen can be folded and unfolded before it malfunctions. So far, there is no consensus on what this number should be in assessing durability because foldable devices have yet to be mass-produced. Nonetheless, the general assumption is that foldable displays should withstand more than 200,000 instances of folding and unfolding, with the display and touch panel or cover window still functioning following that level of usage. Anything less makes for an undesirable foldable display.

To guarantee a reliability measure of 200,000 times is another major challenge for foldable displays, as shown by analysis in the IHS Markit report, AMOLED & Foldable/Rollable Display Technology Trend - 2019.

High costs overall
The cost of producing foldable displays is high, and the elevated cost is a direct result of the abovementioned factors that already make production challenging to begin with: the thinner structure required for foldable displays, the new materials involved, the complexity of the manufacturing process, the low manufacturing yield, and the issue of reliability.

As described in the Display Dynamics piece, Cost analysis for different foldable touch solutions, the cost of foldable displays can be lofty with the use of special materials. While no foldable displays have been mass-produced, two options are considered viable as touch solutions for foldables. These two—metal mesh and silver nanowire—will contribute to the higher cost of foldables. To this end, Samsung Display has a distinct advantage in that it does not require either of the two materials as a touch solution. This is because Samsung uses its own patented Y-OCTA touch solution, which dispenses with the additional film substrate required by non-Y-OCTA solutions.

A customized supply chain
Unlike other smartphone displays, foldable displays must be custom-made. Display makers can mass-produce, say, 5.8" or 6.0" full-high-definition LCD or OLED displays, and then sell higher-end products to top-tier smartphone brands while relegating comparably lower-quality displays to second-tier or white-box brands for emerging markets.

However, no second-tier brands or white-box markets exist at present for foldable displays. The brands that will be launching foldable displays are leading names in the industry, including stalwarts like Samsung, LG, Huawei, Xiaomi, and Lenovo. The big brands alone can do this because for foldable displays, development costs are very high and market prospects remain unclear. There is simply no precedent for such a device in the past, which makes it difficult to gauge how the market will respond if a foldable product is, in fact, launched.

Moreover, each brand has its own design and form factor, which means that display makers can develop only one model at a time for an individual brand. For investors, this singular approach in the manufacturing of a specialty product increases the risk in losing their Return on Development Investment or Return on Design-In (RODI).

This is also one reason why Royole and Samsung are adopting simultaneous roles as display maker and smartphone device-maker: the two companies can exercise greater control in the budgetary and manufacturing aspects alike of production, reducing their overall financial exposure.

But for other display makers without the abundant resources enjoyed by Royole and Samsung, the failure of a foldable display product means the manufacturer will be unable to find other customers to absorb the high development costs that had been incurred throughout the project. Inventories of a failed foldable display—already rejected by the market for whatever reason—will also be challenging to offload, exacerbating the financial woes of the maker.

One solution to potentially avert such a catastrophe is for a partnership between two entities—the foldable device-maker on the one hand, and the smart-handheld device-maker on the other, as shown in the table below. However, it remains to be seen whether such an unlikely "marriage" of rivals will work, and whether they can combine differing visions to come up with a successful product that is ultimately embraced by the market.

RT @arrcusinc: With the emergence of #5G, it is vital to adjust and scale to keep up with market demands. Watch the webinar on demand as we…

Will the recently proposed Connected Home Internet Protocol (CHIP) standard be a positive development for the… https://t.co/gsv7AznXYt

We have a large analyst team headed to Mobile World Congress #MWC20 in Barcelona this February. Please let us know… https://t.co/bm0YKChnqM