Floating Storage: How much of the oil supply surplus can be stored by tankers?

The last major period of global oil oversupply was 2014-16, during which global inventories built up by about 1.1 billion bbls, or an average of one million barrels per day (MMb/d). IHS Markit expects the current period of oversupply to build a larger volume of oil in a matter of months. In 2014-16, it is estimated that a maximum of 120 million barrels (MMbbl) of oil was put into floating storage - which means oil stored on ships with no booked delivery destination. This time, floating storage will fill more rapidly to relieve the pressure cooker of bulging onshore oil inventories.

Whilst some of this surplus may be refined into products and put into product storage if not sold, this would only be a short-term solution, because of product quality degradation concerns. This result would mean floating storage of crude oil would have to play a significant role in addition to onshore crude storage. The crude price drop has flipped the market structure to contango, and some traders have also seized on the opportunity to use floating storage in a contango play, in both the crude and product markets, which will also tie up tankers up.

The current crude oil fleet equates to about 2.4 billion bbl, and of this we estimate around 0.2 billion bbl is available for use as floating storage. However, the freight market is also highly dynamic, so the amount of potential floating storage availability can change—and not only as more ships are booked for floating storage. Oil trade is expected to slow because of the sharp decline in oil demand, and a 5% reduction in trade might therefore free up tanker capacity and increase floating storage availability by about 100 MMbbl. However, as more ships become available, this would reduce freight rates will decrease, not only making floating storage more attractive but also potentially incentivizing operators to reduce speeds and thereby increase consumption efficiency and reduce fuel costs. A slowing of speed would absorb available fleet capacity.

The majority of ships we have identified as either confirmed or potential being leased for floating storage are currently on their voyages to load (see Figure 1), therefore, it is currently not known where they will ultimately be positioned. Most floating storage deals refer to options that could get exercised after the ship is loaded and completes its long-haul voyage, for example once the ships reach South East Asia or the Far East after loading in the Middle East Gulf or US Gulf Coast. 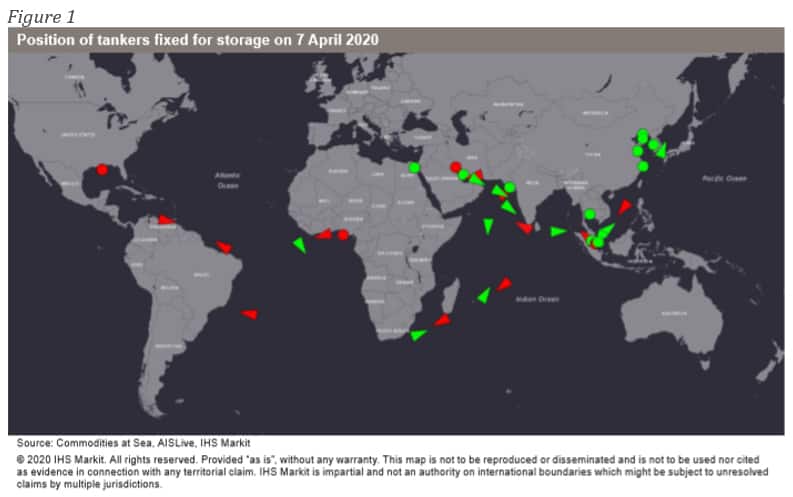 The use of floating storage relies on the oil market being in contango, that is future prices above prompt rises, and the strength of the contango being greater than the cost of freight. Given the significant capital outlay associated with chartering and idling a full-laden crude vessel such as a very large crude carrier (VLCC), floating storage "plays" are only rarely speculative. Instead, they typically rely on fully hedged economics to create the requisite conditions to justify the operation, which means floating storage fixtures are highly sensitive to the shifts in freight rates and futures prices.

Over the past month, there have been significant fluctuations in marginal floating storage economics, albeit, they have remained positive since mid-March. The filling of floating storage will be most rapid during the peak of the over-supply—now. As oil demand and price recover, the contango structure will weaken and the floating storage oil will return to market, but some could remain on ships for many months.