Solar farms traditionally evoke images of vast plains of reflective PV panels, spread over otherwise spartan terrain, or more compact installations topping suburban homes and parking lots. However, as the cost plummets and demand for carbon-free electricity rises, solar installations are spreading to fill other niches, including in areas where land has historically been too valuable or sensitive for solar parks to be a viable option. Floating solar-voltaics (FPV) - generally comprised of solar PV panels mounted on floating, moored platforms - offer an option for renewable energy generation that will not compete with other uses for land. While the cost of acquiring and developing land for solar arrays has either risen or remained fairly consistent over the past decade, the price of solar PV panels has dropped by roughly 75% from 2010 to 2017, which has in some cases made land acquisition the most expensive part of solar projects. In the past 10 years, floating solar has exhibited rapid growth, showing a similar trajectory - albeit on a micro-scale - to that observed in traditional solar and wind power. Global capacity is now estimated to be approaching 1,200 MW, and with the installation of larger scale facilities now gaining momentum (China installed the first facility with a capacity exceeding 50 MW in late 2018), the nascent industry appears poised for rapid growth.

One of the major companies pioneering floating solar technology is France's Ciel et Terre, which to date has installed nearly 300 MW of floating solar capacity in Asia, Europe and the Americas. The company touts the flexibility of its applications, which can be constructed in ponds or reservoirs also used for water treatment, irrigation, desalination, aquaculture, industrial water or hydroelectric dams. As with most smaller-scale and early-phase technologies, a variety of techniques and configurations are still in the works, but most floating solar arrays are comprised of plastic pontoon-style floats, anchored by mooring lines, with PV panels mounted at an angle on top. Electricity is then gathered by combiner boxes and converted to alternating current by inverters. The pontoons are able to withstand storms and other hazardous weather conditions, and remain unaffected by the condition of the water (e.g. when mounted over wastewater treatment plants or former coal mines). While the vast majority of projects are focused on artificial water bodies, a few have been successfully moored in marine environments, including the Maldives and Norway.

The first floating solar installation was installed at a pilot-scale project in 2007 in Aichi, Japan. With its dearth of both domestic energy resources and land suited for large-scale installations, densely-populated Japan seems a natural candidate for such innovations, and the country has seen rapid growth in deployment, helped by substantial feed-in tariffs established in 2012. In 2014, Kyocera TCL Solar commissioned what was at the time the world's largest floating PV facility - a 1.7 MW installation at the Nishihira Pond in Hyogo Prefecture. This record was quickly surpassed, and in March 2018 the same company installed new national record-holder - a 13.7 MW plant located on the Yamakura Dam reservoir in Chiba Prefecture. By the end of 2018, Japan was home to 56 of the world's 70 largest floating PV facilities. As part of its post-Fukushima energy transition, Japan aims to source 22 - 24% of its electricity from renewable sources, implying an installed capacity of about 64 GW. Renewables currently account for just over 15% of power generation, with 5.7% sourced from solar power. 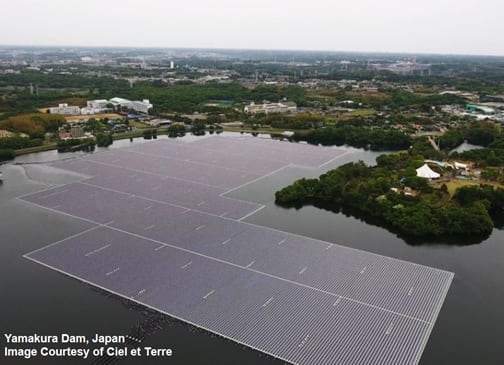 The first commercial installation a - 175 KW system placed over an irrigation pond - began operations in 2008 at the Far Niente Winery in California, where the high cost of land in general (and especially that suited for vineyards) makes large-scale energy installations economically unattractive. Vineyards and water management districts have begun to embrace "floatovoltaics" as part of the state's plan to achieve 100% carbon-free electricity by 2045 and in late 2018, Ciel et Terre began operations at a 252 KW floating array atop a wastewater treatment pond in Kelseyville, California. The company has continued to hint at more, larger-scale projects in the pipeline for the state, which devotes an estimated 20% of statewide electricity use to pumping, treating, and heating water. The National Renewable Energy Laboratory estimates that over 24,000 artificial reservoirs nationwide are suited for floatovoltaics, and installing FPV facilities on just 27% of them could generate about 10% of the nation's annual electricity production. 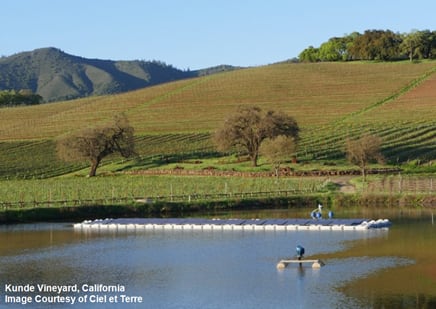 One of the challenges to building large-scale solar and wind arrays is justifying the impact to the land required, which may have competing uses or negative environmental impacts. By utilizing artificial water bodies, which are generally owned by private entities or water management agencies, floating solar arrays bypass the issue while eliminating the need for costly site preparation, such as clearing land or installing foundations, and they can offer further environmental benefits once in place. By shading the bodies of water, solar panels inhibit the growth of algae and reduce the loss of water from evaporation. The installations reduce wave action, thereby limiting erosion along the reservoir embankments. Once installed, the floating arrays are less prone to gather dust, while the water provides cooling for the panels, allowing for greater efficiency and lower maintenance requirements. Ciel et Terre even claims that the natural cooling effect provided by water allows floating systems to operate more efficiently and produce more power than traditional ground-mounted systems.

As it is already the world leader in solar panel manufacturing, installation and global capacity, it is not surprising that China would quickly surpass the early starters in Japan and California to become the world leader in floating solar. Under its "Top Runner" program, China is mandated to install an ever-increasing amount of new solar capacity per year, using panels that meet prescribed efficiency standards. In a demonstration of its aim to replace its legacy of coal-fired power plants and their resulting pollution, a number of former coal mines have been converted into sites for floating solar installations. Anhui Province in particular has been historically home to a series of coal mines, dozens of which are now flooded and producing solar power, turning what are essentially toxic waste dumps into centers for clean energy generation. Ciel et Terre began commissioning the Anhui CECEP facility in mid-2018, with an eventual capacity of 70 MW and China's latest Environmental Protection Law is targeting the deployment of 1 GW of floating solar on abandoned coal mines alone. 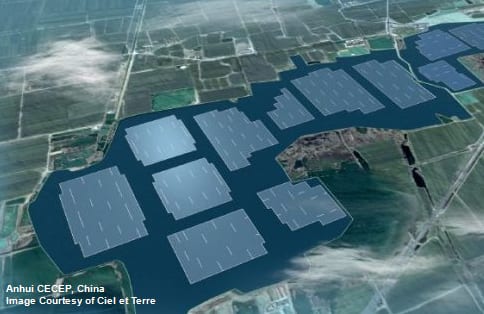 Another development with particularly interesting potential is the deployment of floating solar panels in conjunction with hydropower facilities, where the solar power can increase the overall yield of the facility, while the hydropower can offset the variable output of the solar array. During times of high solar radiation, the solar array can transmit power directly to the grid, while the reservoir can accumulate or hold water to be used later, essentially creating energy storage facilities with minimal new infrastructure required. Globally, hydropower accounts for the largest share of renewable energy, with an estimated 1,170 GW installed capacity, including approximately 256,700 sq km of reservoir water surface, which could create the potential for some 4,400 GW of floating PV. Several countries, including Japan and China have already installed solar panels atop hydropower dams, while others including India have similar projects in the development phase. In China, an increasing number of hydropower stations have been unable to operate at full capacity in recent years due to insufficient water storage, and the situation is exacerbated by intense competition for water resources between electricity generation and agriculture demands. A 2016 study calculated that China has the potential for about 160 GW of floating solar, amounting to about 2,500 sq km of water surface and further estimated that if the floating PV systems were integrated with existing hydropower stations, they could generate over 200 TW hours per year, greatly contributing to China's targeted long-term energy transition.

Although China, Japan and California are the frontrunners, floating solar PV has been deployed worldwide, with notably large projects commissioned in England, the Netherlands and Taiwan. In South America, a few large-scale projects are under development in Brazil, but the African continent is notably absent from the list, despite potential advantage of small-scale installations requiring minimal infrastructure. As the cost of solar arrays continues to plummet, it is expected that operators will find new and innovative ways to deploy them, and the nascent floating solar industry appears prepared to be at the forefront.

Get a comprehensive, real-time view of global E&P activity with IHS Markit Upstream Intelligence solutions, including weekly analysis delivered to your inbox via the International Energy Letter.