US companies reported the steepest downturn since 2009 in March as measures to limit the COVID-19 outbreak hit businesses across the country. Adjusted for seasonal factors, the IHS Markit Flash Composite PMI Output Index posted 40.5 in March, down from 49.6 in February, to signal a second successive contraction in output and the steepest slump recorded since comparable survey data were available in October 2009. 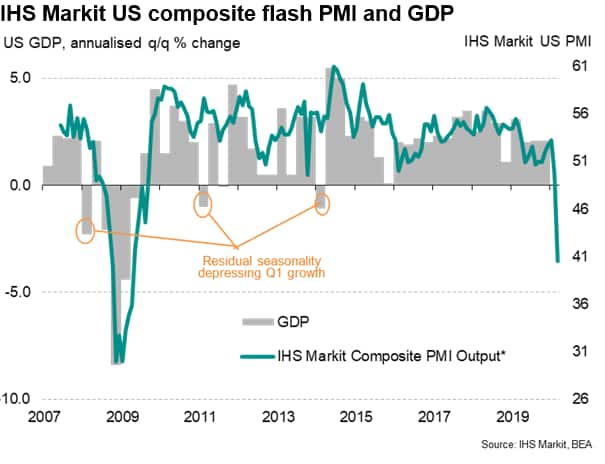 Widespread falls in activity were reported across the manufacturing and service sectors, though the service sector has been especially badly affected. Consumer-facing industries such as restaurants, bars and hotels appear to be bearing the brunt of the social distancing measures, while travel and tourism has been decimated amid government restrictions on international travel. Overall, the downturn in service sector activity was by far the largest since data on this sector were first collected in 2009. 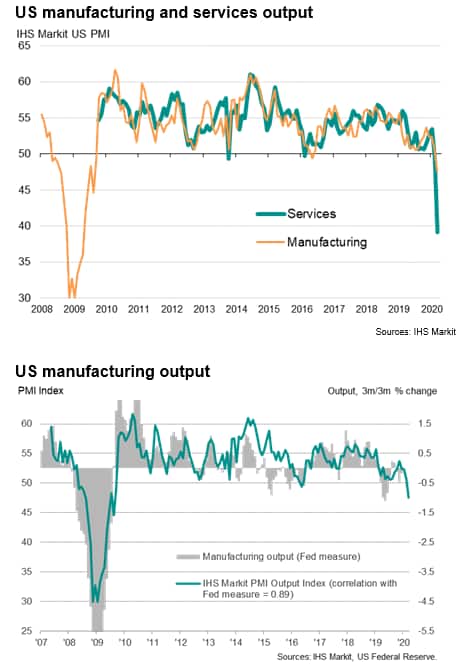 Although manufacturing reported a weaker downturn by comparison to services, the collapse in output was none the less still the most severe recorded since 2009.

Companies also reported the first contraction of new business since data collection began. The marked decrease in new orders reportedly stemmed from sharp falls in client demand following the outbreak of COVID-19. Lower customer demand was also reflected in falling new export orders, with key export partners shutting down or limiting the size of orders. Manufacturers and service providers both noted a drop in total new business, with service providers in particular registering a robust contraction.

In addition to worsening demand, manufacturers also reported production to have been constrained by ongoing supply chain issues, with average delivery times lengthening to an extent rarely seen over the past decade.

Looking ahead, companies reported the sharpest fall in backlogs of work ever recorded by the surveys, hinting strongly that operating capacity will be scaled back further in coming months.

Not surprisingly, companies' expectations regarding business activity over the coming year also slumped markedly to a level that was by far the lowest ever recorded by the survey. Firms generally expressed concerns regarding the longevity of shutdowns and the ongoing impact of the coronavirus outbreak.

The downturn in demand and gloomier prospects meant jobs were slashed at a pace not witnessed since the global financial crisis in 2009, as firms either closed or ran at reduced capacity amid widespread cost-cutting. Similar marked rates of decline were recorded for both service sector and manufacturing payrolls.

The survey underscores how the US is likely already in a recession that will inevitably deepen further. The March PMI is roughly indicative of GDP falling at an annualised rate approaching 5%, but the increasing number of virus-fighting lockdowns and closures mean the second quarter will likely see a far steeper rate of decline.