UK business activity came closer to stabilising in June, according to provisional PMI survey data, boosting hopes that the economy will return to growth in the third quarter after an unprecedented downturn due to the coronavirus disease 2019 (COVID-19) pandemic.

The flash IHS Markit/CIPS composite PMI, based on around 80% of normal replies received from the monthly surveys, showed a record rise in points terms for a second consecutive month in June. The headline index, measuring output of both manufacturing and services, rose from 30.0 in May to 47.6, its highest since February and up sharply since the all-time low of 13.8 plumbed in April at the height of the COVID-19 lockdown. 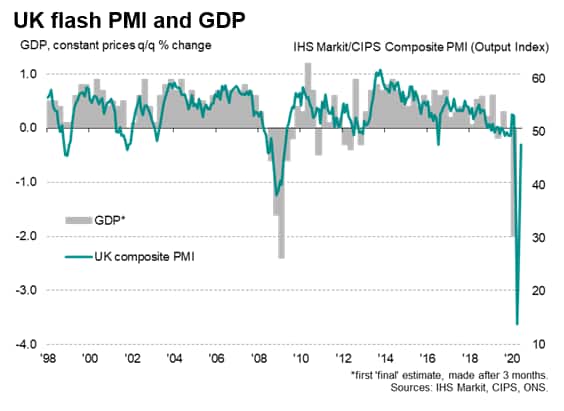 Since April, the PMI has been buoyed by many businesses ramping up activity or reopening after lockdown closures. Manufacturing output even returned to growth after three months of continual decline, while the service sector reported the smallest contraction of output since February.

Notable order book gains were seen in the clothing sector, which reported higher demand as high streets reopened, as well as among suppliers of basic metals, chemicals and plastics, where new order growth was linked to factories and construction firms increasingly returning to work.

In services, welcome revivals in demand were seen in some consumer-facing sectors and transportation, linked to the easing of the lockdown and the reopening of retail.

However, many firms continued to report falling demand as an increasing dampener on business levels, often linked to households and businesses tightening belts and consumer spending being hit by the weakened job market. Overall new order inflows fell again in June, led by export orders dropping particularly sharply again, albeit registering the weakest contraction of overseas demand since February.

Especially marked falls in demand and output were seen for hotels and restaurants, which has been by far the hardest-hit sector during the pandemic. New orders of transport goods (including cars) and electrical and electronic goods also fell especially sharply again, most likely reflecting reduced demand for high-ticket items by households amid the ongoing uncertainty caused by the pandemic. 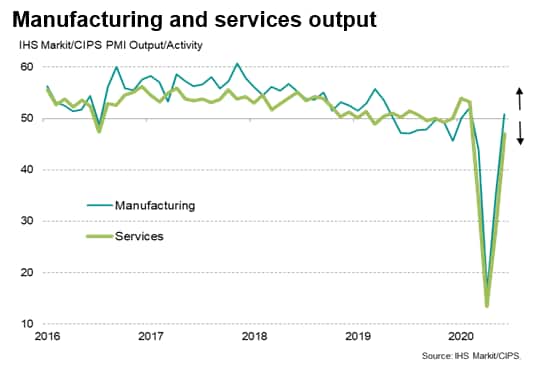 Other indicators from the survey showed employment continuing to fall at a steep rate, albeit with job losses in both manufacturing and services running at the lowest since March. The drop in employment over the past four months has been on an unprecedented scale, although the overall rate of decline eased back in June to below the prior global financial crisis peak rate, helped in part by some companies bringing furloughed employees back to work. 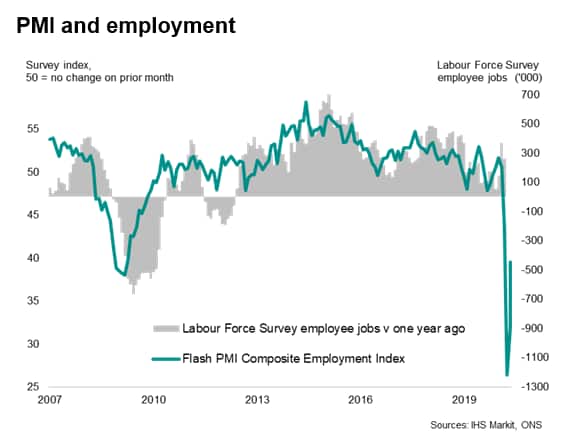 Business expectations for the year ahead meanwhile jumped to the highest since February, having bottomed out back in March, as increasing numbers of companies saw brighter prospects.

The recent improvements in the PMI data add to signs that the worst of the immediate economic impact from the COVID-19 pandemic was felt in April and that the economy looks likely return to growth in the third quarter, especially given the further planned easing of the lockdown from 4th July.

However, while confidence is rising that the economy will return to growth in the third quarter as the lockdown continues to ease, longer term recovery prospects remain highly uncertain. Some of the recent gains reflect short-term bounces as businesses returned to work, but demand clearly remains weak, as indicated by a further steep decline in backlogs of orders and an ongoing fall in new orders. Many COVID-19 restrictions and social distancing measures will also need to stay in place until an effective treatment or vaccine is available, curbing demand in a variety of service sectors in particular. 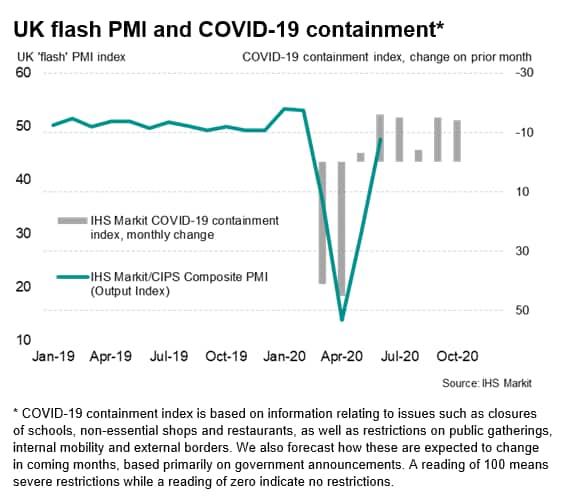 Uncertainty over recovery prospects and job prospects also mean demand for many goods, especially non-essential big-ticket items, is likely to remain weak for many months, with Brexit uncertainty also continuing to cast a shadow over the economy.

Our forecasting team therefore expects the economy to contract by 11.9% this year before expanding by a relatively modest 4.9% in 2021, which is far more cautious than the 15% surge anticipated in 2021 by the Bank of England.

Bank of England on hold for now

The improvement in the PMI data also add to our belief that the Bank of England will hold off from further stimulus, either in the form of more asset purchases and especially with any move into negative interest rates, in the next few months. However, more QE could well be on the cards if the UK were to be hit by a second COVID-19 wave, triggering a second shutdown of consumer-facing services and non-essential retail premises. Policymakers will also be carefully monitoring the labour market, to see if the termination of the Coronavirus Job Retention Scheme at the end of October leads to a marked pick up in job losses, pushing the unemployment rate higher. 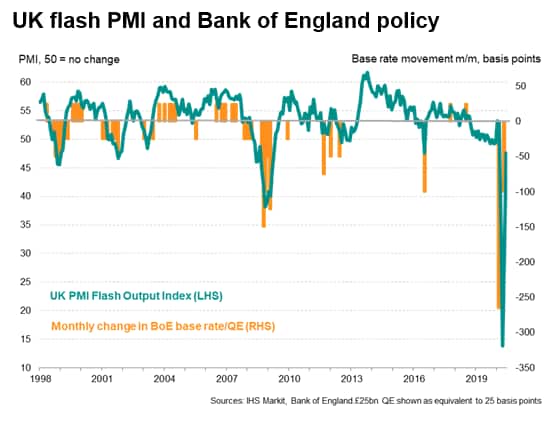