Flash PMI survey data indicate that the post-election rebound seen in January extended into February, putting the UK economy on course for solid first quarter growth. However, delivery delays and heightened uncertainty stemming from the coronavirus continue to pose downside risks to future growth, and business remains concerned regarding the uncertain consequences of Brexit.

The composite flash IHS Markit/CIPS PMI held steady at 53.3 in February, signalling solid economic growth of at least 0.2% in the first two months of the year after stagnation in the closing quarter of 2019. Whereas the latter months of 2019 had been dogged by fears of a no-deal Brexit and heighted political uncertainty ahead of the 12th December general election, recent months have seen business sentiment lift higher as no-deal risks faded and the new government took power with a strong working majority. The rise in sentiment has in turn driven increased spending, with orders reportedly rising both from business and consumer markets. 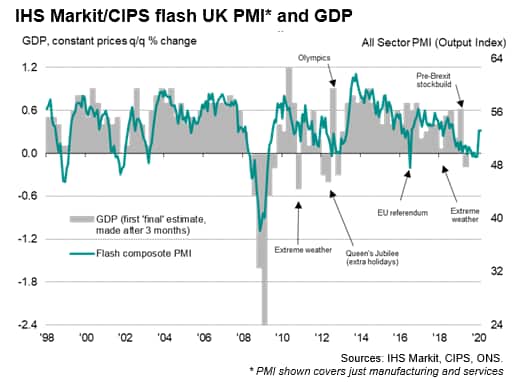 Both manufacturing and service sectors reported rising output during the month, with factory production showing the first noteworthy increase for almost a year and service sector activity up for a second month after four months of more or less stagnating. 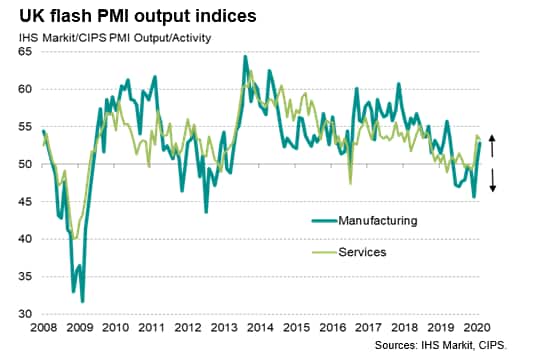 However, companies reported that the COVID-19 outbreak had dented tourism, hit overseas sales and led to cancelled foreign orders in some cases. Although overall inflows of new business rose at the second-fastest rate seen for almost one and a half years, export orders fell for a fourteenth successive month, albeit only marginally.

Furthermore, the manufacturing sector reported that delivery delays were the most widespread since March of last year, when no-deal Brexit stockpiling put pressure on suppliers. This time, however, delays were most commonly linked to supply issues relating to the coronavirus. The concern is that widespread delivery problems will constrain production in coming months unless fresh supplies of inputs can be sourced. Stocks of inputs fell at the sharpest rate in seven years due to supply shortages.

The improved PMI readings in recent months, alongside a rise in consumer price inflation to a six-month high of 1.8% in January, has reduced the likelihood of an imminent cut to interest rates by the Bank of England's Monetary Policy Committee. The rise has pushed the composite into territory broadly consistent with neutral monetary policy, albeit with an easing bias. 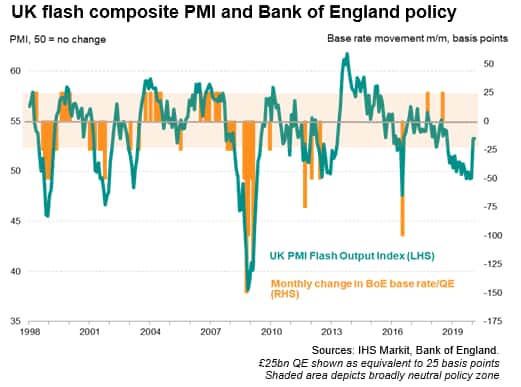 However, IHS Markit's European economics team considers that underlying weak growth pressures (linked in part to the coronavirus), below-target inflation, and entrenched uncertainty about the nature of the final UK-EU trade relationship will result in an interest-rate cut in the coming months. A major fear is that the gulf between the UK and EU negotiating positions regarding their future trade relationship will weigh down on business sentiment. Many firms will wait for greater clarity about the final UK-EU relationship before they give the green light to big-ticket investment plans.

Read more about the challenges facing the Bank of England in our Week Ahead special report.