November's preliminary PMI numbers show the developed world's economies continuing to grow at above trend rates, spurring further solid job creation. However, supply disruptions continue to run at near-record rates, showing few signs of easing since the unprecedented delays reported in October, stymieing manufacturing growth and contributing to the steepest rise in input costs recorded in the history of the surveys.

Flash PMI surveys for November signalled a slight acceleration in the pace of economic growth across the world's largest developed economies, taking the pace of expansion to the fastest since July.

Growth in the 'G4' developed economies of the US, Eurozone, Japan and the UK had surged to an all-time high in May as economies opened up from pandemic-related restrictions, but growth then slowed sharply up to September as the rebound faded and COVID-19 Delta waves led to renewed economic disruptions, notably in the US. Since September, however, the PMI has indicated a modest upturn in the pace of expansion across the G4 economies.

At 55.6, the GDP-weighted average PMI output index for the four economies so far in the fourth quarter is only marginally below the average of 55.7 seen in the third quarter to suggest only a minor growth slowdown, albeit down sharply from 59.6 in the second quarter. The recent average is notably also well above the survey's long-run pre-pandemic average, signalling sustained above trend developed world GDP growth.

The upturn was accompanied by another month of solid jobs growth, as the employment index for the G4 economies registered 54.0, albeit down marginally from 54.1 in October in part due to some companies reporting difficulties finding staff. 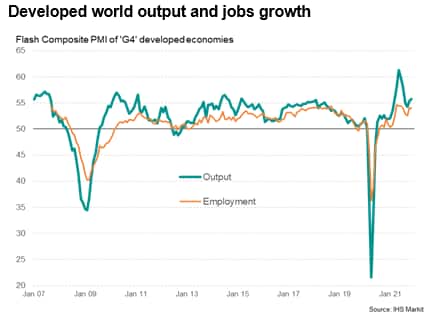 The biggest changes in recent months have been evident in Asia Pacific region, with output growth reviving in Japan as well as Australia (which is also covered by the flash PMIs) on the back of easing Delta waves. November saw output rise for a second month in Japan, increasing at the steepest rate since April 2018, having fallen continually between May and September of this year.

Similarly, output rose for a second straight month in Australia, growing at the fastest rate since June, as business recovered from three prior months of sharply falling output. 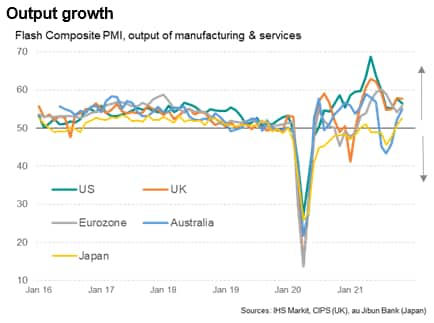 Growth meanwhile ticked higher in Europe, with expansions gaining momentum in both the Eurozone and the UK, the latter recording the stronger expansion for the second month in a row. In contrast, growth slowed in the US - albeit having accelerated markedly in October as the Delta wave faded.

So far in the fourth quarter, the UK has recorded the strongest expansion of the G4 economies, followed closely by the US, reflecting the strengths of service sector expansions in these economies amid looser COVID-19 restrictions. However, it's the eurozone which has seen the strongest manufacturing expansion followed by the US, with the UK and Japan trailing.

Measured across the G4 economies, service sector output accelerated marginally in November to the fastest since July, outpacing manufacturing where, although growth also picked up, the latest expansion of factory output was the second-weakest recorded over the past 14 months. 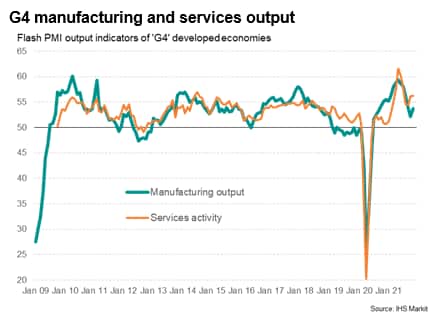 One of the principal reasons for the underperformance of manufacturing in recent months has been supply-side constraints, as reflected most prominently in an unprecedented lengthening of global supplier delivery times. For the G4 developed world economies, delivery times have lengthened continually since the start of 2020 as the pandemic disrupted global factories and shipping.

The incidence of delays initially appeared to have peaked back in June 2021, but further disruptions due to port congestion and COVID-related production issues in Asia led to the supply situation worsening at a new record rate in October.

November saw some easing in the indices of supply delays, albeit merely to the lowest since August and still far ahead of anything ever seen prior to the pandemic. 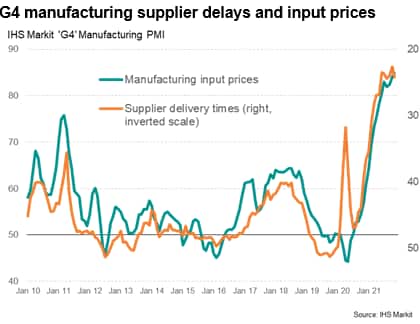 While the worst supply delays are seen in the US, lengthening lead times continue to be widely reported in Europe - both across the Eurozone and UK - and to a lesser extent in Japan. 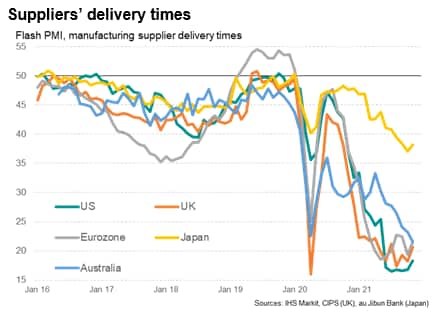 Ongoing severe supply shortages led to higher prices again. The headline measure of input costs covering goods and services across the G4 economies surged from 70.9 in October to 75.0 in November, breaking new record highs for a third straight month. Also, most notably in the US and UK, labour shortages were also seen to have been driving up staff costs and wages.

Average input costs rose at record rates in all the G4 economies as well as Australia. 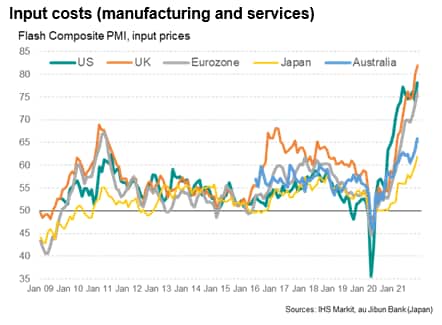 Rising prices and supply shortages were often seen to have dented business confidence with regards to prospects for the year ahead, but most noticeable was a downturn in service sector sentiment in the eurozone due to growing concerns about the potential for further COVID-19 restrictions to be introduced amid a sudden rise in infection rates. Note that in Germany, where cases have risen especially sharply, inflows of new business have already slipped to near-stagnation in November according to the latest flash PMIs. The broader spread of the virus would threaten a similar services-led slowdown through the eurozone.

Similarly, sentiment in the UK sank to its lowest so far this year reflecting supply and COVID-19 worries. Relatively low infection rates meanwhile helped buoy confidence in the US and Japan, though rising case numbers in the US are a key metric to watch in coming weeks. 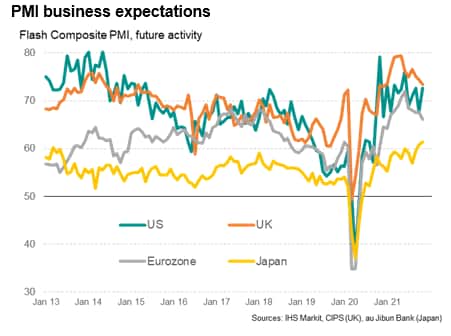 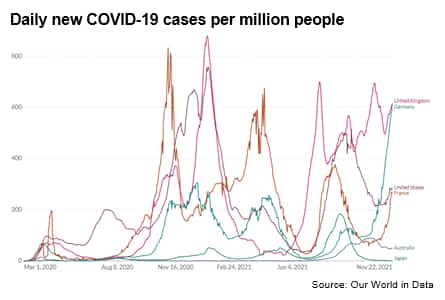