The pace of economic growth across the four largest developed economies rebounded in February after having slowed sharply due to the Omicron wave at the start of the year. The service sector led the upturn as COVID-19 containment measures were relaxed in the UK, eurozone and US, though Japan slipped further into decline as restrictions were tightened. Manufacturers meanwhile continued to struggle with production constraints, notably for labour amid staff illnesses, though supply chain constraints showed some signs of easing.

While the ebbing of the Omicron wave bodes well for near-term output growth, persistent price pressures suggest that longer term headwinds have intensified.

Preliminary PMI data for February signalled a marked rebound in business activity. Measured across the 'G4' largest developed economies, output growth accelerated markedly from the one-and-a-half-year low seen in January, though failed to match the expansion rates seen during the fourth quarter. However, new orders growth picked up to the highest since last July, pointing to encouraging sustained demand growth.

These headline numbers therefore suggest that the Omicron variant of COVID-19 has had both a mild and short-lived impact on the major developed economies on average.

The upturn was led by the service sector, for which a further likely loosening of COVID-19 containment measures looks set to provide an additional boost in March. While manufacturing output continued to expand, the rate of increase waned slightly, largely reflecting ongoing supply-side constraints, though - as explored more fully below - these are showing some signs of easing.

Conditions varied by country, however, linked to varying degrees of COVID-19 containment.

UK business activity growth surged in February as COVID-19 restrictions were almost entirely withdrawn. Similar - though less comprehensive - easings of containment measures in the eurozone and US led to faster growth after Omicron related slowdowns in January. While UK growth accelerated to the highest since last June with a composite flash PMI output index of 60.2, up from 54.2 in January, US growth rebounded to the highest since December - an output index of 56.0 against 51.1 in January - while the eurozone saw the fastest growth since last September, with the PMI recovering from 52.3 in January to 55.8.

In contrast, Japan fell into a deeper downturn as virus containment measures were tightened again to the most severe since last October. The au Jibun Bank composite flash PMI output index fell from 49.9 to 44.6 to indicate the steepest decline since June 2020. Japan was the only G4 economy to see falling manufacturing output and falling service sector activity. 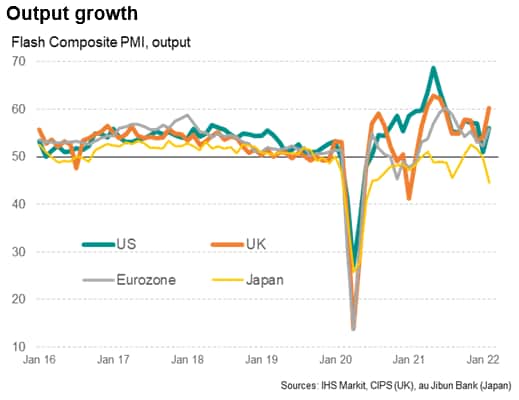 A marked easing in supply chain delays in Europe played a significant role in helping support manufacturing production growth in February, whereas more widespread disruptions in the US and little change in the number of delays in Japan were seen to have acted as significant impediments again.

However, labour shortages associated with the Omicron outbreak were also widely cited in the US, the eurozone (notably Germany) and Japan as having also impeded production to greater extents than in the UK. 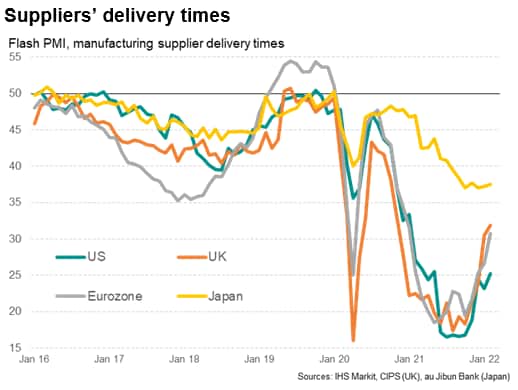 Averaged across the G4 economies, supplier delivery times lengthened again in February but with delays running at the lowest recorded for a year. This easing of the supply crunch fed through to a reduction in the degree of pricing power enjoyed by suppliers, resulting in the lowest rate of manufacturing input price inflation since last May. However, both supplier delays and price gauges remain high by historical standards of the survey. 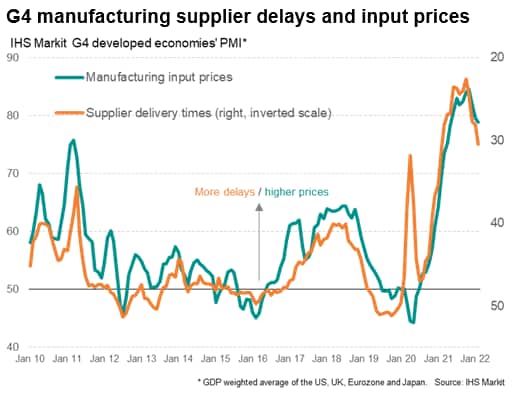 Although raw material price pressures showed signs of easing, other price pressures intensified, notably in terms of rising energy bills and increased wage costs. Average input price inflation across the G4 economies accelerated again as a result, running below the peaks seen in November and December but still signalling one of the highest rates of input cost inflation seen in the survey history.

Average prices charged for goods and services consequently rose at an increased rate across the G4 economies as firms increasingly sought to pass these persistent input costs pressures on to customers, the rate of inflation accelerated to a new all-time high. 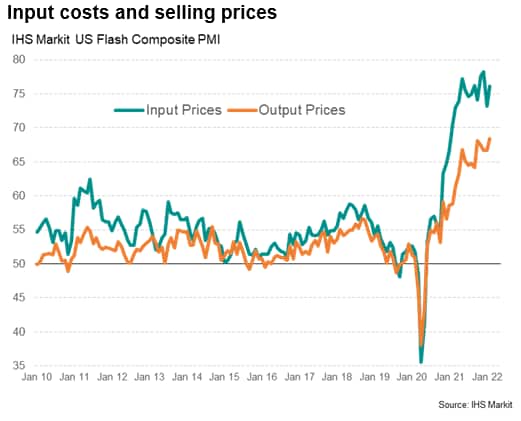 New survey highs were seen for selling price inflation rates in the US and the eurozone, with the UK's rate running at a near-record pace. In contrast, the inflation rate cooled in Japan, running at only a very modest level by comparison.

In broad terms, the flash PMI data suggest that the economic impact of the Omicron wave has been both modest and short-lived in the US and Europe, but at the same time inflationary pressures are showing increasing signs of persistence, with upwards pressure on inflation from raw materials moving to energy and wages. As such, the data will add to speculation of more aggressive paths of policy normalisation in the US, the UK and, to a lesser extent, the eurozone.

The swift Omicron rebounds in the US and Europe also bode well for Japan, suggesting its downturn may soon turn to recovery.

With COVID-19 case numbers trending lower, COVID-19 containment measures will ease further across the board in March, providing further momentum to reviving service sector demand and facilitating greater manufacturing production via reduced supply constraints, both in terms of labour and materials. 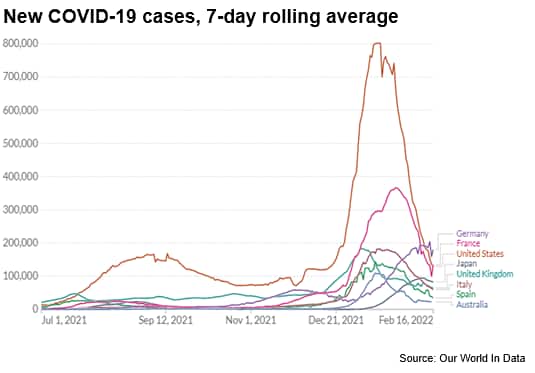 While the ebbing of the Omicron wave should help boost demand in the short term, notably for hard-hit consumer services such as travel, recreation and tourism, and help alleviate some of the supply constraints, the upcoming PMI data will be keenly watched for clues as to the longer-term resilience of demand in the face of numerous headwinds. These include a structural change in the labour force with a reduced participation rate observed in many countries, soaring energy prices, intensifying geopolitical concerns relating to the situation in Ukraine, de facto fiscal policy tightening as pandemic-related stimulus is wound down, and policy normalisation - and even potential policy tightening - at some of the world's largest central banks. The pandemic is also by no means over, especially for economies such as China which are implementing a zero-COVID strategy, and the potential for further virus waves remains a key risk to the outlook.