The escalating economic cost of measures to contain the coronavirus disease 2019 (COVID-19) pandemic was highlighted by business survey data in April, as companies in the world's largest developed economies reported a downturn in business activity exceeding that seen even at the height of the global financial crisis.

IHS Markit's 'flash' PMI (Purchasing Managers' Index) surveys provide the first internationally comparable insights into business conditions each month, and showed dramatic declines in output, demand and employment in April as countries ramped up their efforts to prevent healthcare systems from being overwhelmed by the coronavirus outbreak. 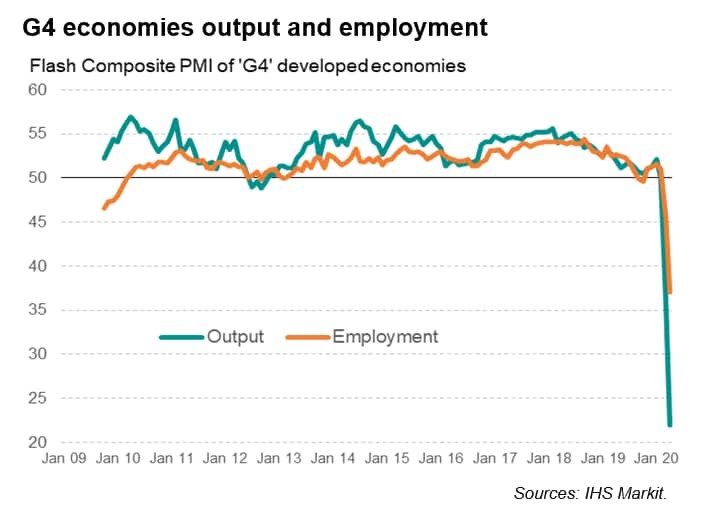 The early flash PMI data are available for the United States, eurozone, Japan and the United Kingdom - collectively representing the 'G4' largest developed world economies - as well as for Australia. Survey record declines in business activity (output) were seen in all of these economies in April, widely blamed by survey contributors on lockdown measures coupled with slumping global demand and shortages of both staff and inputs. 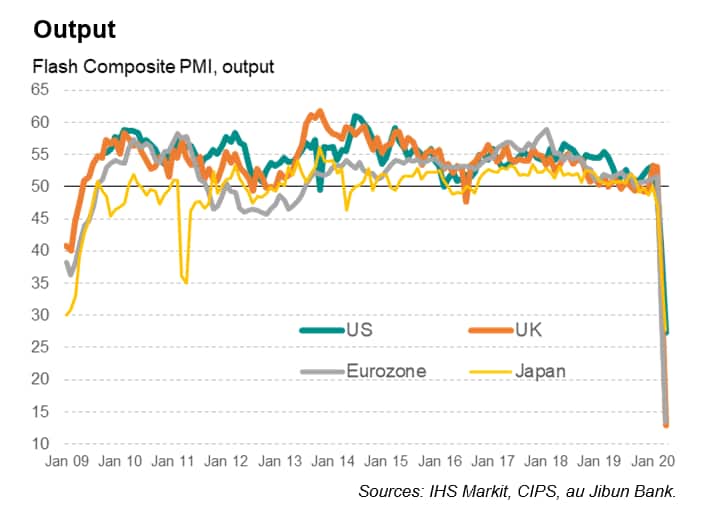 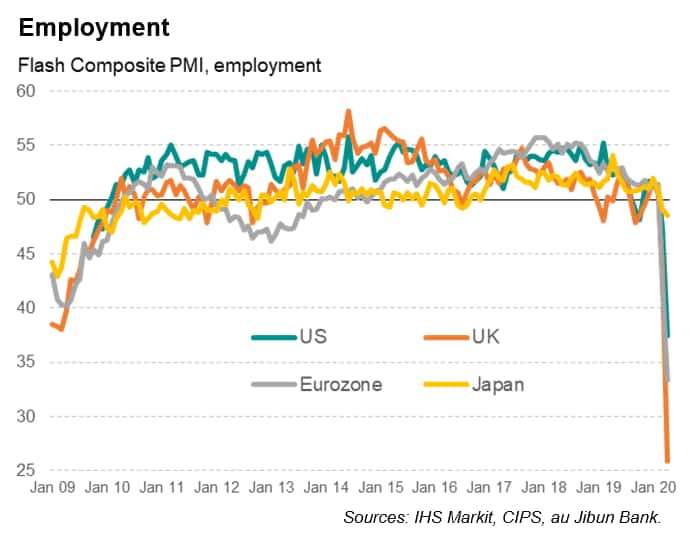 The G4 economies' composite output index, a GDP-weighted average covering both manufacturing and services, fell from a prior record low of 36.2 in March to just 21.9 in April. The new orders index sank to 22.4 and the employment index hit an unprecedented low of 37.1.

European countries, which became the focus of the virus outbreak in March and April, saw the steepest rates of decline, with business output and employment collapsing at rates far exceeding those suffered at the height of the global financial crisis. However, record rates of contraction were also seen in the US and Japan, as well as in Australia, as social distancing measures and lockdowns took an increasing toll.

Service sectors saw the worst of the impact from lockdown measures, and especially consumer-facing companies in the recreation and travel industries, but the severe downturn in output, demand and jobs was broad-based. While the G4 services output index fell from 34.6 in March to 21.2, the manufacturing output index sank from 42.1 to 26.6. 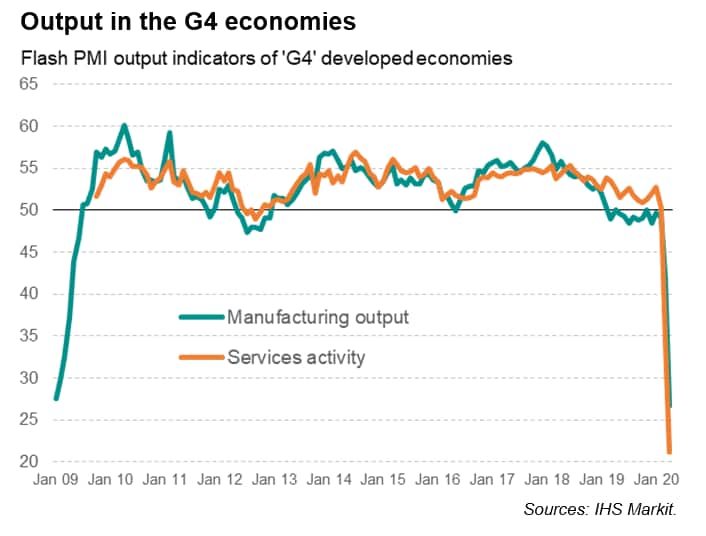 The sheer scale of the falls in the PMIs therefore adds to signs that the second quarter will see historically dramatic contractions of GDP, and will add to worries about the ultimate cost of the fight against the pandemic.

See below for summaries of individual economies, or click on the links below for more detailed analyses:

The IHS Markit Flash U.S. Composite PMI Output Index posted 27.4 in April, down from 40.9 in March, to signal the fastest downturn in private sector output since data collection began in late-2009. The survey highlights how the COVID-19 outbreak has dealt a blow to the US economy of a ferocity not previously seen in recent history. The deterioration in the flash PMI numbers indicates a rate of GDP contraction exceeding that seen even at the height of the global financial crisis, with jobs also being slashed at a rate far exceeding anything previously recorded by the survey.

The blow was most heavily felt in the service sector, and especially for consumer-facing companies, but both manufacturing and service sectors saw record falls in output. 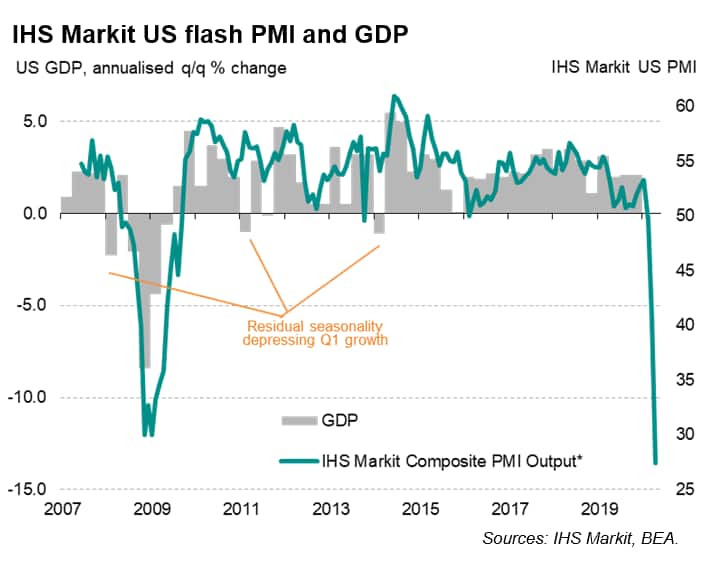 The eurozone economy suffered the steepest falls in business activity and employment ever recorded during April as a result of measures taken to contain the COVID-19 outbreak. The flash IHS Markit Eurozone Composite PMI plummeted to an all-time low of 13.5 in April, down from a prior record low of 29.7 in March, to indicate by far the largest monthly collapse in output recorded in over two decades of survey data collection. By comparison, the lowest reading seen during the global financial crisis was 36.2, reached in February 2009.

The service sector bore the brunt of the impact from the lockdown measures, with the tertiary sector's business activity index sliding from 26.4 in March to just 11.7 in April, though manufacturing also saw a record fall in production with the output index down to 18.4.

Our model, which compares the PMI with GDP but takes into account 'non-linearity' during times of extremely strong growth or decline, suggests that the April survey is indicative of the eurozone economy contracting at a quarterly rate of approximately 7.5%. 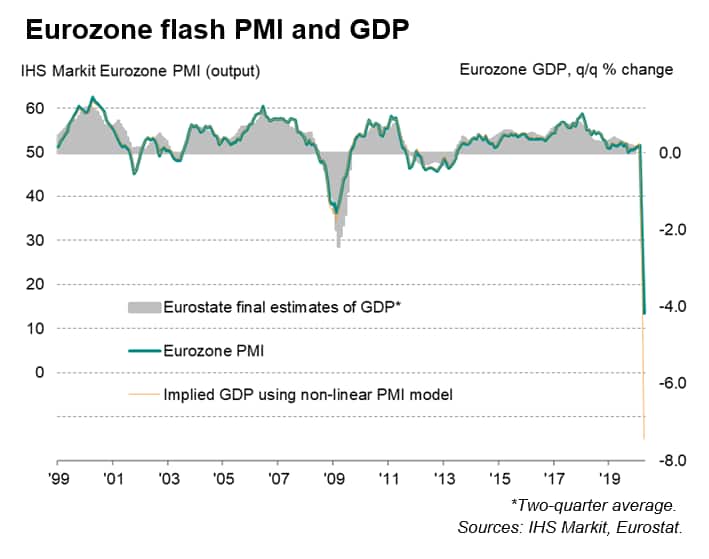 The unprecedented scale of the collapse was broad-based across the euro area, with composite flash PMI output indices hitting all-time lows of 17.1 and 11.2 respectively in Germany and France (down from 35.0 and 28.9 in March), while the rest of the region saw the composite PMI slide from 25.0 to 11.5.

Jobs were meanwhile cut at the fastest rate in the survey history and average prices charged for goods and services fell at the sharpest rate since June 2009 as companies increasingly offered discounts to boost sales in the face of slumping revenues.

In the UK, the flash IHS Markit/CIPS composite PMI slumped from 36.0 in March to just 12.9. Before March, the prior low in the 22-year survey history was 38.1, reached in November 2008. Historical comparisons of the PMI with GDP using a new non-linear regression model indicate that the April survey is consistent with GDP falling at a quarterly rate approaching 7.0%.

Record falls in output across both manufacturing and services were accompanied by job losses on an unprecedented scale, even if furloughed workers are excluded. Pricing power also collapsed alongside the slump in demand, leading to the largest drop in average prices charged for goods and services ever recorded by the survey. 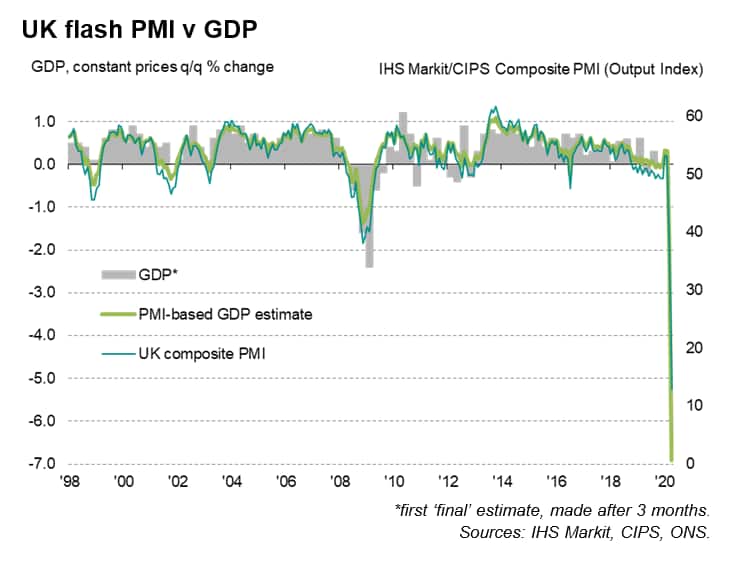 In Japan, the au Jibun Bank Composite PMI hit the lowest seen in the survey's twelve-and-a-half year history, dropping from 36.2 in March to 27.8 in April, according to the flash estimate. The prior low of 30.1 had been recorded in January 2009. New orders and backlogs of work deteriorated at near-record rates, and optimism regarding future output sank to a survey low. Employment showed only a relatively modest decline, however, as firms were encouraged to hold on to staff during the pandemic.

The service sector business activity index fell to a new low in the face of social containment measures. The manufacturing output index meanwhile hit 37.8 from 41.1 in March, but notably remained well above the low of 18.5 seen during the global financial crisis. 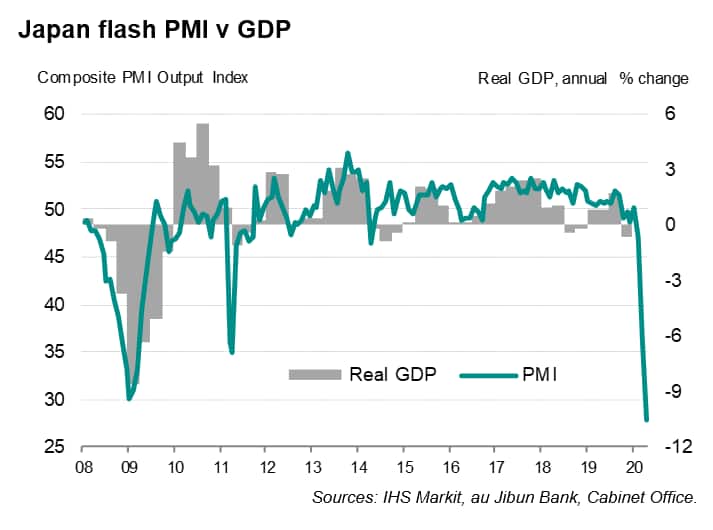 In Australia, the flash CBA Composite PMI slumped from a prior all-time low of 39.4 in March to a new low of 22.4. Inflows of new business, exports, backlogs of work and employment all fell at the steepest rates seen in the near four-year history of the surveys by wide margins. Average prices charged for goods and services meanwhile fell at the quickest rate since the survey began in 2016.

The service sector took the hardest hit from containment measures, but manufacturing output also fell sharply. A key divergence between the two sectors was seen in terms of costs. Whereas service sector costs fell at a record rate, input costs in manufacturing rose to the greatest extent in two years amid supply shortages and the weakened currency.