IHS Markit's flash PMI data indicated a narrowing divergence of economic trends among the major developed economies in December, linked largely to variations in COVID-19 restrictions. A loosening of lockdown restrictions in Europe boosted PMI levels in the Eurozone and UK, while tighter measures in the US pulled the PMI lower. The US nevertheless continued to outperform the European economies, while Japan trailed further behind, albeit seeing its downturn ease further.

Service sectors were once again the hardest hit from social distancing measures, but better news came from the manufacturing economy, where output growth accelerated to show a strong expansion, helping ensure that the economic impact from the pandemic in the fourth quarter will be far more muted than seen earlier in the year at the height of the global lockdowns. COVID-19 containment measures will likely continue to inhibit growth in the coming months, but business sentiment about the year ahead has improved on vaccine news, brightening the longer-term picture.

Flash PMI surveys for the US, Eurozone, Japan and UK, which collectively account for approximately half of global GDP, indicated an expansion of business activity for the sixth consecutive month in December, with the rate of expansion accelerating slightly compared to November. At 52.2, the G4 economies' flash PMI output index* rose from 51.6 in November. However, the latest reading remained below the recent highs seen in August and October, and also remained well below the long-run survey average of 53.5 seen in the five years prior to the pandemic. The reading therefore hints at an ongoing, but relatively sluggish, economic expansion.

*The flash PMIs are based on around 80% of the total number of survey replies usually received. As such, they provide the first, internationally comparable, insights into how economic conditions are changing. Currently, flash PMI are produced for the United States, the eurozone, Japan, the United Kingdom and Australia, encompassing manufacturing and service sectors in each economy. These survey data can in turn be weighted together according to each country's GDP to form international aggregates. Weighting the US, eurozone, UK and Japan PMIs together, for example, creates a "G4 developed world" series of indicators, covering output, new orders, employment, inflation etc.

Because the four largest developed economies account for approximately half of global GDP (at market prices), the G4 flash PMI output index acts as both a good indicator of the Global PMI as well as global GDP growth. Since 2007, when IHS Markit's US PMI series was first included in the global PMI database, the flash PMI has exhibited a 94% correlation with annual percent changes in global GDP with the PMI acting with a lead of one quarter. 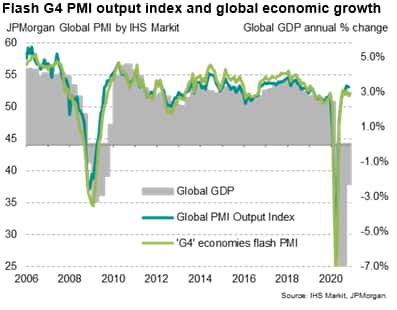 The headline index masked strong variations by sector, and a deeper dive into the data reveals an ongoing marked underperformance of the service sector, which continued to be constrained by COVID-19 related restrictions. Although manufacturing output rose collectively across the G4 economies at the strongest rate since April 2018, growth of service sector output remained very modest, rising at only a slightly faster rate than the near-stalled pace seen in November, which had been the weakest since the sector's recovery began in August. 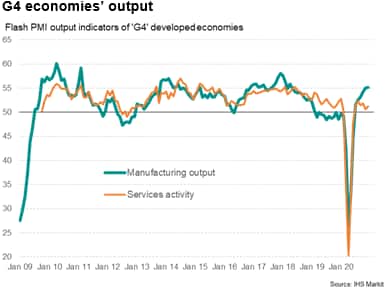 There were also marked variations in performance by country, though the differentials narrowed compared to November, largely reflecting variations in government measures applied during the month to tackle resurgent waves of COVID-19 infections. Importantly, in all cases the PMIs are signalling a far more subdued economic impact from COVID-19 in the fourth quarter than seen at the height of the pandemic in the second quarter of 2020.

November had seen the United States lead the expansion, with activity buoyed by a relatively low tightening of COVID-19 containment measures during the month compared to October, as well as heightened activity around Thanksgiving and a notable boost of reduced political uncertainly following the Presidential election. A more severe tightening of virus containment measures in December, and growing concerns over virus case numbers, has since pulled the PMI down from its highest level in over five years, though the index continues to signal robust growth. The survey data therefore add to the likelihood of the economy having continued to expand in the fourth quarter, building on the recovery seen in the third quarter. Service sector growth has nevertheless slowed especially markedly, and manufacturing output growth has also weakened, although in both cases the rate of expansion has exceeded the G4 averages, most notably in the service sector.

In Europe, the flash Eurozone composite PMI meanwhile remained in contraction territory, albeit registering only a very marginal decline in output after November's steep drop. In contrast to the tightening of COVID-19 restrictions seen in the US, Eurozone containment levels were eased slightly, though they remained severe in some member states. Hence the service sector continued to act as a major drag on the region. Brighter news also came from manufacturing, where the rate of expansion accelerated to one of the fastest rates seen in recent years, buoyed in particular by surging growth among German producers.

The United Kingdom managed to marginally outperform the Eurozone, as its composite PMI edged back into growth territory after a national lockdown led to a contraction of business activity in November. Service sector activity stabilised but it was the manufacturing sector that saw the strongest performance, benefitting in part from a pre-Brexit stockpiling boost.

Meanwhile in Japan, the equivalent au Jibun Bank PMI - also compiled by IHS Markit - remained in contraction territory but signalled the weakest decline since the pandemic-related downturn began back in February. An easing in the service sector's downturn was accompanied by news of the manufacturing sector approaching stabilisation. 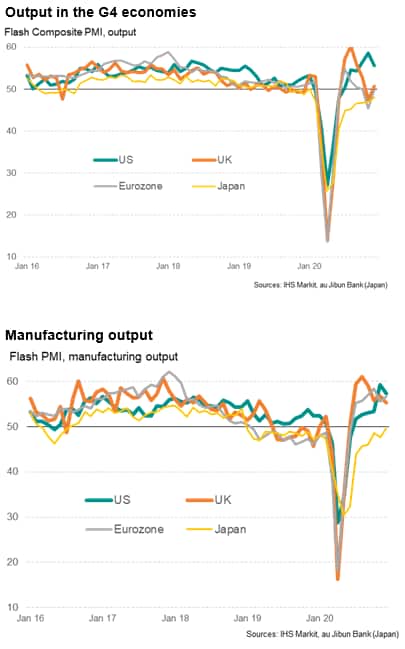 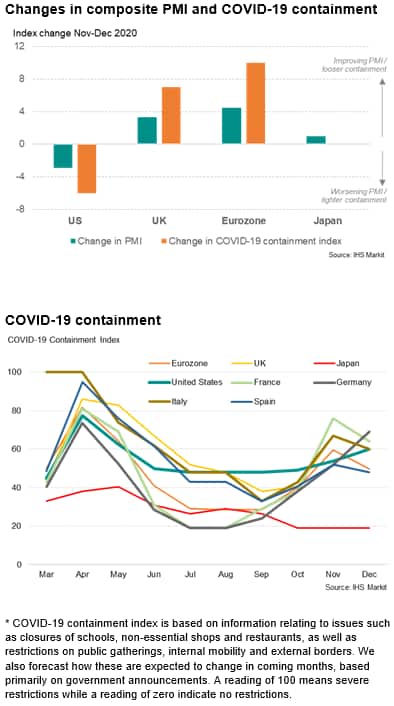 Looking ahead, COVID-19 containment indices are expected to signal a modest easing of restrictions globally in January and February, including in the US and Europe, before a more meaningful relaxation of measures in March. However, the overall degree of containment is set to remain significant, thereby acting as a drag on the global economy, and further spikes in virus cases after the Christmas holidays could see restrictions tighten again rather than ease.

More positively, hopes of vaccines being rolled out quickly have risen, which has boosted business expectations for the year ahead. Sentiment among the G4 economies hit a post-pandemic high in November and has fallen back only slightly in December, remaining elevated by recent standards. While rising COVID-19 numbers may therefore present some speed bumps in the recovery path in the near-term, the longer-term outlook has brightened in recent months.