Early indicators of economic performance in February underscore the impact of COVID-19 restrictions on different economies. While some countries are benefitting from looser virus containment measures, other countries that have taken additional measures to control the pandemic so far this year are seeing falling levels of service sector business activity, adding to international growth differentials.

US and Australia see strong expansions

Flash PMI survey data showed US service sector business activity rising especially sharply midway through the first quarter of 2021, with the services activity index gaining from 58.3 in January to 58.9 in February, its highest since March 2015. The average so far in 2021, at 58.6, puts the US on course for its strongest quarter since the third quarter of 2014.

This gathering pace of momentum in the US service sector has corresponded with additional fiscal stimulus, notably in the form of extra cash dispersals to households, as well as a loosening of COVID-19 containment measures: the IHS Markit COVID-19 Containment Index* for the US has fallen ten points since December.

A similar picture of robust service sector growth is evident in Australia, where the services business activity index remained well above 50 (indicating expansion) in February, albeit dipping from 55.6 in January to 54.1. Despite the fall, at 54.9 the average Australian services PMI reading for the first quarter so far is only modestly lower than the average of 55.3 seen in the fourth quarter of last year, which was the strongest since the second quarter of 2017. The COVID-19 Containment Index for Australia meanwhile fell further in February, and at 40 is well below the global average of 46.

Japan and Europe hit by restrictions

It's been a different story in Europe and Japan, however, where virus-related measures have been tightened so far this year. 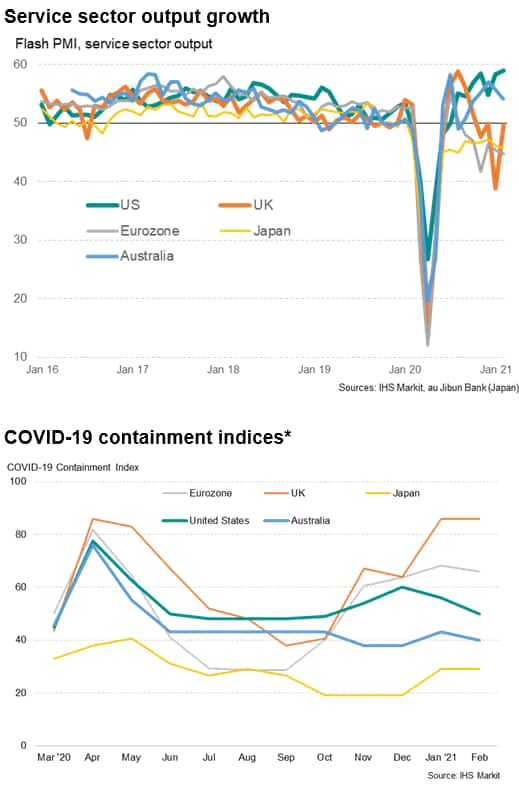 In Japan, the COVID-19 Containment Index is running well below the global average at 29 so far this year, but that's up from 20 in December to indicate tightened restrictions. Experience over the past year has also signalled that economic activity is far more sensitive to the virus in Japan than elsewhere, possibly due to the service sector's high dependence on travel and tourism. Hence the services business activity index for Japan fell from 46.1 in January to 45.8 in February, its lowest since last August. The first quarter average so far of 46.0 indicates a steep drop in services output.

Service sectors were also again hard hit from social distancing measures in Europe. The service sector PMI for the Eurozone fell from 45.4 in January to 44.7 in February, its lowest since November and leaving the year to date average at just 45.1 - similar to the fourth quarter's 45.0 during which GDP fell by 0.7%.

The indices for Germany and France fell to 45.9 and 43.6 respectively in February, taking year to date averages down to 46.3 and 45.4, indicative of severe contractions. Both France and Germany have seen COVID-19 containment measures tighten considerably since last October to fight further waves of virus infections.

An even tighter degree of containment has been witnessed in the UK, which has seen services activity fall to the greatest degree of the economies covered by the flash PMIs so far this year. At 86 in the first two months of 2021, the UK's containment index is currently the highest in the world. Although the services activity index for the UK rose to 49.7 in February to signal only a marginal deterioration, January had seen the index plummet almost ten points to 39.5, registering a particularly severe contraction as a third national lockdown was instigated. The near stabilisation of activity signalled by the February PMI merely points to activity continuing to run at a much-reduced level compared to late last year following the collapse seen in January. 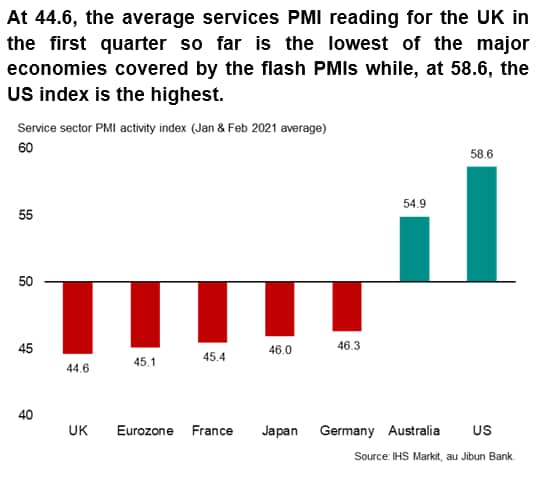