The world's largest developed economies saw business activity rise for the first time since February in July, as economies re-opened following the relaxation of restrictions designed to control the coronavirus disease 2019 (COVID-19) pandemic. However, both new orders and employment continued to fall, raising questions about the sustainability of the upturn after the initial rebound from lockdowns.

Performance varied by country, with Europe leading the upturn, the US stabilising and Japan lagging, though in all cases labour markets remain a particular concern.

IHS Markit's flash PMI surveys for the 'G4' developed economies indicated that economic growth stalled in February before falling into the steepest downturn on record as the COVID-19 pandemic caused widespread economic disruption. The peak of the rate of decline appeared in April 2020, coinciding with strict lockdowns and enforced closures of non-essential businesses across many countries. Since April, the rate of decline has eased rapidly as the lockdowns have eased, culminating in the first meaningful overall improvement in business activity in July since January. 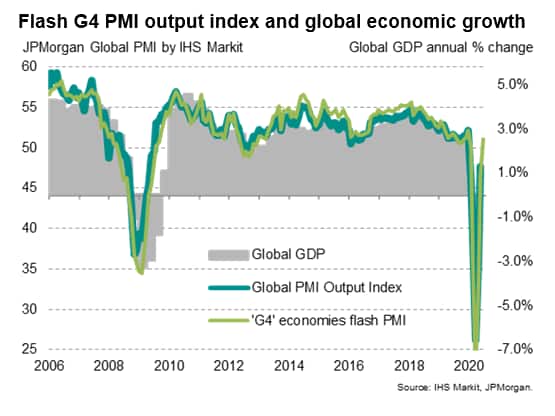 The IHS Markit Flash PMIs are early releases of survey data based on around 80% of the total number of replies usually received during a month. As such, they provide the first, internationally comparable, insights into how economic conditions are changing. Currently, flash PMI are produced for the United States, the eurozone, Japan, the United Kingdom and Australia, encompassing manufacturing and service sector business conditions in each economy. These survey data can in turn be weighted together according to each country's GDP to form international aggregates. Weighting the US, eurozone, UK and Japan PMIs together, for example, creates a "G4 developed world" series of indicators, covering output, new orders, employment, inflation etc.

Because these four largest developed economies account for approximately half of global GDP (at market prices), the G4 flash PMI output index acts as both a good indicator of the Global PMI as well as global GDP growth. Since 2007, when IHS Markit's US PMI series were first included in the global PMI database, the flash PMI has exhibited a 94% correlation with annual percent changes in global GDP with the PMI acting with a lead of one quarter. Using regression analysis, we can infer a rate of GDP growth from the PMI.

The G4 economies' flash PMI output index rose from 46.5 in June to 51.1 in July, up further from an all-time low of 21.5 in April. The statistical historical relationship of the flash PMI with global GDP suggests that the latest reading is broadly consistent with the global economy growing by 2% on a year ago, up from a signal of 0.2% growth in June. Note that this does not mean GDP was 2% higher than a year ago in July, it merely indicates that the global economy is expanding at a rate equivalent to 2% per annum. At such a modest pace, it would take many months, if not years, to recoup the output lost during the pandemic. 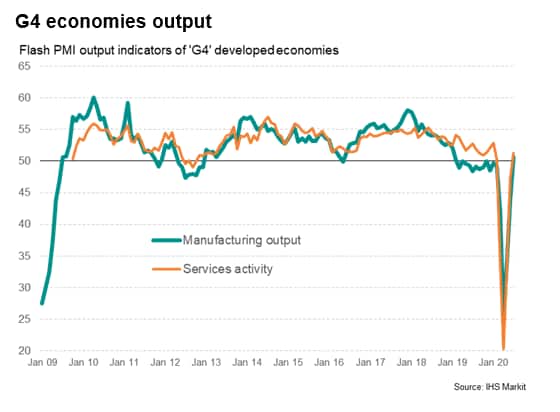 July saw manufacturing output rise for the first time since February 2019, ending a downturn that had initially been linked to the intensification of global trade wars and exacerbated in 2020 by the pandemic. However, at just 50.6 in July, the manufacturing PMI output index for the G4 economies indicated only a very modest improvement. 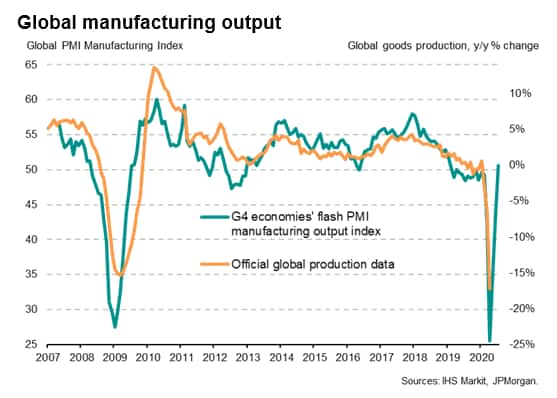 A marginally stronger gain was recorded for service sector output in July, where activity rose across the G4 economies for the first time since February, rising to the greatest extent since January, However, the overall improvement was relatively muted, dampened in particular by companies in consumer-facing sectors continuing to struggle amid social distancing requirements and restrictions on travel.

The strongest output gains in July were seen in France and the UK, the latter enjoying the largest monthly gain for five years. The increase in France was accompanied by a return to growth in Germany and, to a lesser extent, the rest of the eurozone. The eurozone as a whole consequently recorded the largest output gain for just over two years.

While composite PMI output indices surged to 57.1 in the UK and 54.8 in the eurozone, the comparable index for the US merely rose to 50.0, indicating a stabilisation of the output trend but falling well short of the strong gains seen in Europe.

While US manufacturing output rose, the service sector continued to deteriorate, albeit at a reduced rate, linked in part to the re-imposition of lockdowns amid increased COVID-19 infection rates. Inflows of new business in the US services sector were especially notable for contracting at an increased rate, bucking the improvement trend seen in all other economies. By contrast, both manufacturing and service sector activity and new orders rose across Europe, where infection rates continued to fall during the month.

Japan fared even worse, with the composite index rising to just 43.9 and new orders falling sharply again, hinting that the economy could contract again in the third quarter unless business picks up substantially in coming months. Both manufacturing and services remained in decline in Japan. 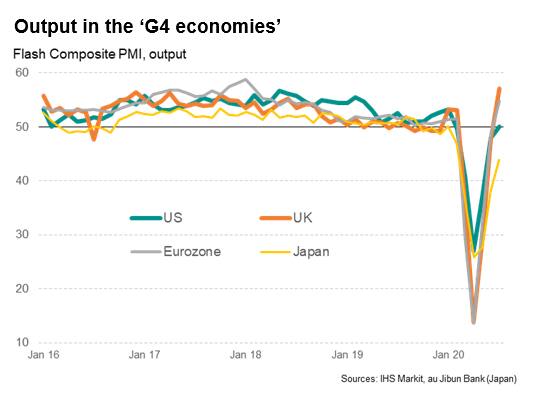 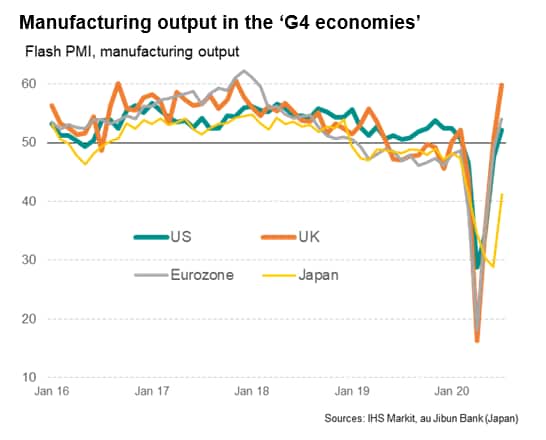 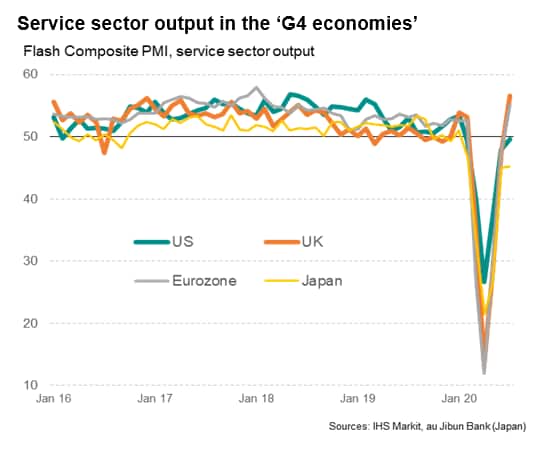 It's important, however, to put the July numbers in some context: while Europe saw the strongest gains, it also saw the steepest downturns at the height of the pandemic. Averaging the composite PMIs over the six months since February, the US has seen the mildest downturn, with an index of 42.1, followed by the UK and Eurozone, with readings of 39.4 and 38.3 respectively. Japan has lagged, with a reading of just 36.4.

The return to growth signalled at the G4 level represents a swift turnaround in developed world (and likely global) economic performance from the height of the pandemic in April.

The rise in the PMI has followed an easing in IHS Markit's Global COVID-19 Containment Index (which takes a basket of restriction measures in each country to gauge the degree of 'lockdown'). The projected further re-opening of economies planned by governments in coming months should help drive the recovery further, though future months will see smaller steps in terms of the re-opening, which suggests the PMI could start to level off. 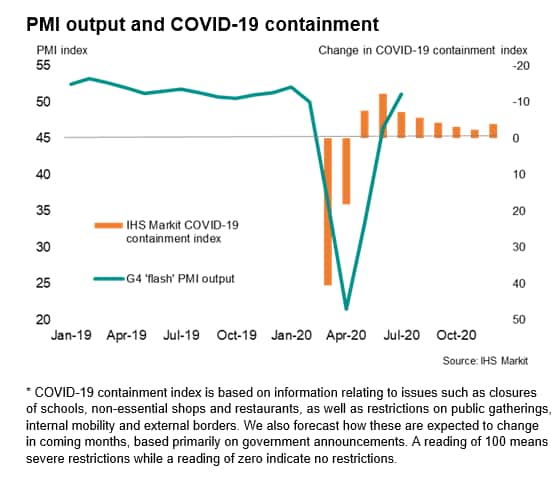 Demand will therefore need to play an increasing role in helping keep the surveys in strong growth territory in coming months to build on this initial V-shaped recovery and make any significant inroads into recouping the output lost to the downturn.

However, in this respect an additional concern is that employment continued to fall across the G4 economies in July, dropping for a fifth successive month, albeit at a reduced rate. The ongoing cut to headcounts reflected sustained weakness of new order inflows, which continued to contract - hinting that July's upturn was driven to a significant extent simply by the reopening of economies rather than a more sustainable improvement in underlying demand. In all G4 economies, the trend in new orders lagged that of output, with declines being seen in Japan and, to a lesser extent, the US, suggesting surplus capacity has developed, which could lead to further job losses if demand does not pick up.

Only in the US did the job market stabilise, with increased rates of job cutting seen in both the UK and Japan. Of the four economies, the UK saw by far the steepest rate of job losses.

Given that consumer spending will be largely determined by job markets, we will be watching the PMI employment indices especially carefully in coming months to help asses recovery paths. The worry is that, in all countries, government support has so far helped to limit job losses, meaning a further wave of redundancies could follow in many countries unless demand rises sufficiently to sustain current staffing levels. 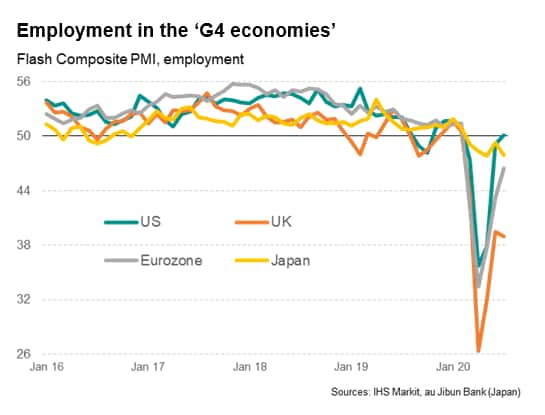